GeoPoll Reports: Tracking the Situation On the Ground in Ukraine

Four months of war in Ukraine has created a devasting humanitarian crisis. According to UNICEF, Russia’s relentless bombing of urban areas has reduced entire cities to ruin and forced a staggering two-thirds of Ukrainian children to flee their homes. As Ukrainian President Zelensky implores Western leaders for military assistance to counter Russian attacks, humanitarian organizations continue their efforts to provide vulnerable populations with lifesaving services and supplies.

Since releasing a report at the outset of Russia’s invasion of Ukraine to assist in the targeting of humanitarian relief, GeoPoll has continued to collect data from across the war-torn country using our mobile web research platform. A dashboard displaying round-the-clock updates of that data as well as trends over time is available here.

In this post we detail insights gleaned from more than 5,000 completed mobile web surveys.

Mounting civilian casualties and the destruction of infrastructure has forced millions of Ukrainians to flee their homes seeking safety and services. The percentage of respondents in our study that have been forced to flee has steadily increased from 19% in early March to 44% on June 17. Even 44% likely underestimates the true scale of displacement caused by the war. 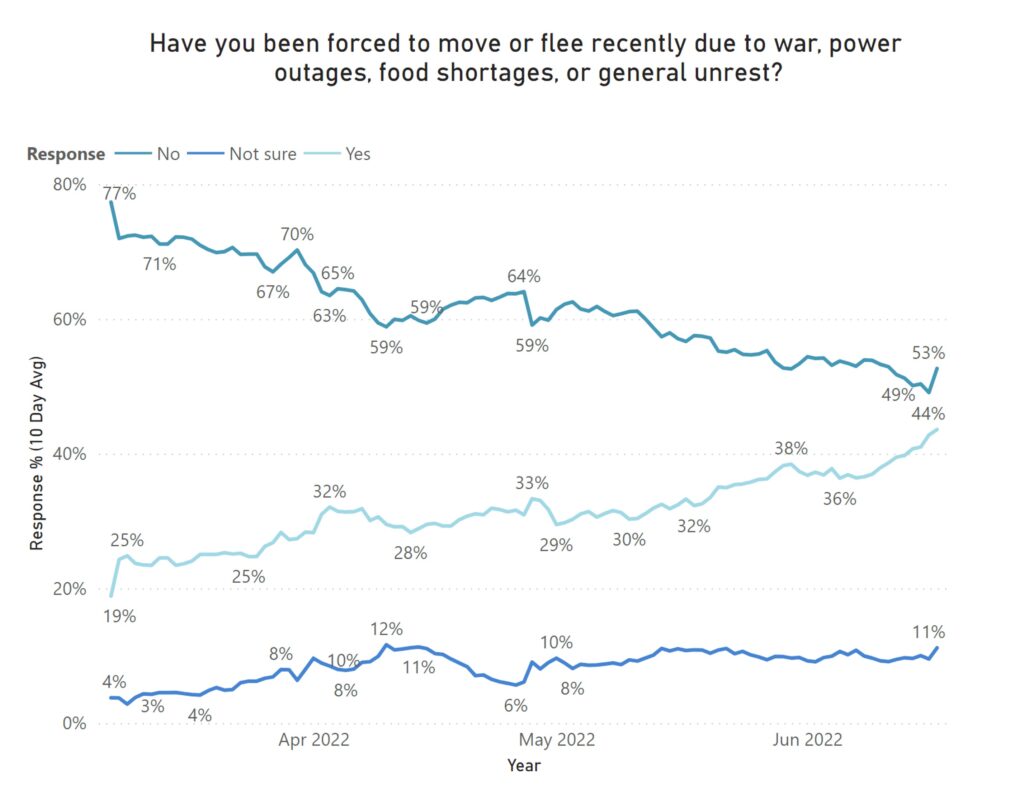 Over the past 4 months, more than 3 out of 4 respondents (79%) know someone who has been forced to move or flee. That segment grew to 85% in the first few weeks of June. 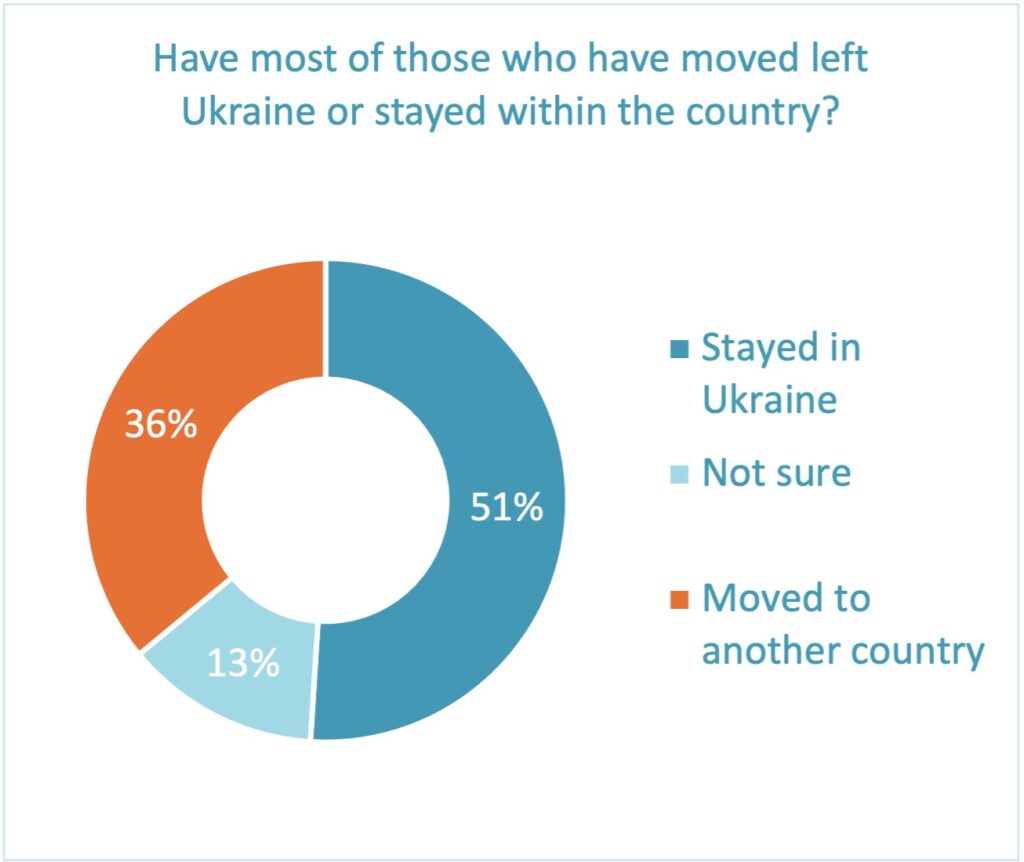 Those who have been forced to flee their homes have mostly stayed in Ukraine according to the majority of respondents (51%).

More than 1 in 3 respondents (36%), however, say most of the people they know who have been forced to flee have moved to another country. As of June 17, the UN has recorded more than 5 million individual refugees from Ukraine across Europe.

Following the same pattern, the percentage of respondents that feel at least somewhat safe in their everyday life has almost doubled, rising from 25% in early March to 49% in mid-June. Only 13% (and 9% of women) say they feel “very safe,” however, illustrating the psychological toll the war is inflicting on almost all Ukrainians. 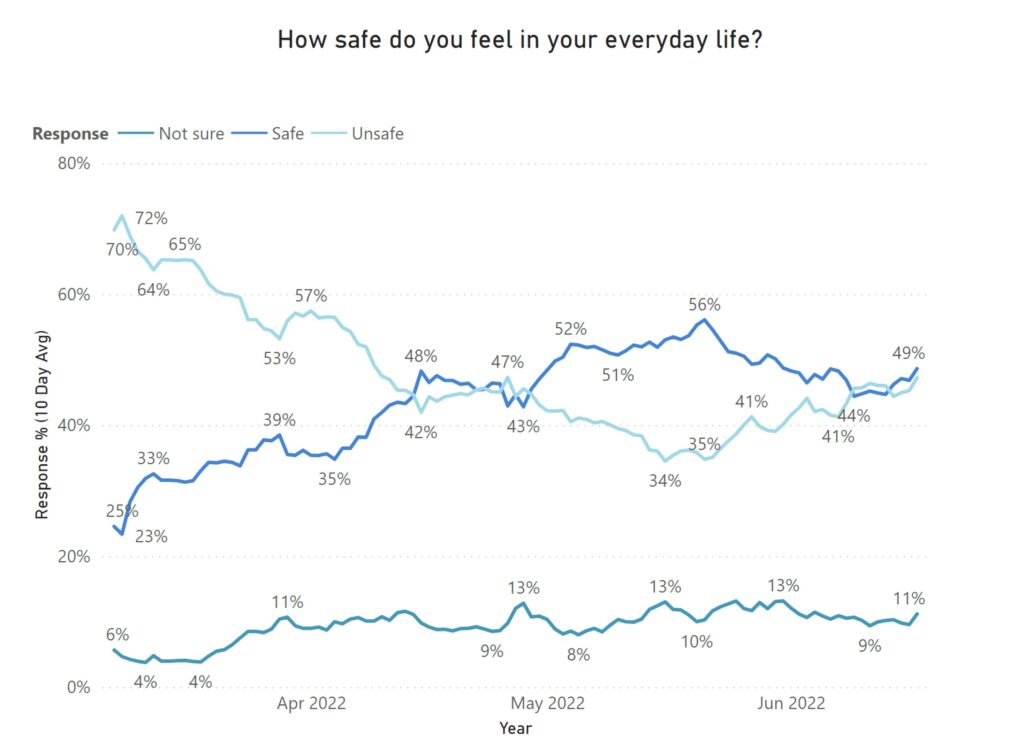 Eastern Ukraine remains the epicenter of the current conflict, though shelling and airstrikes persist in other regions causing widespread damage to infrastructure and essential services. In the past few weeks, the situation appears to be taking a turn for the worse. From the end of April until the middle of June, the percentage of respondents experiencing at least occasional shortages of necessities, such as fuel, water, and electricity, rose from 49% to 68%. 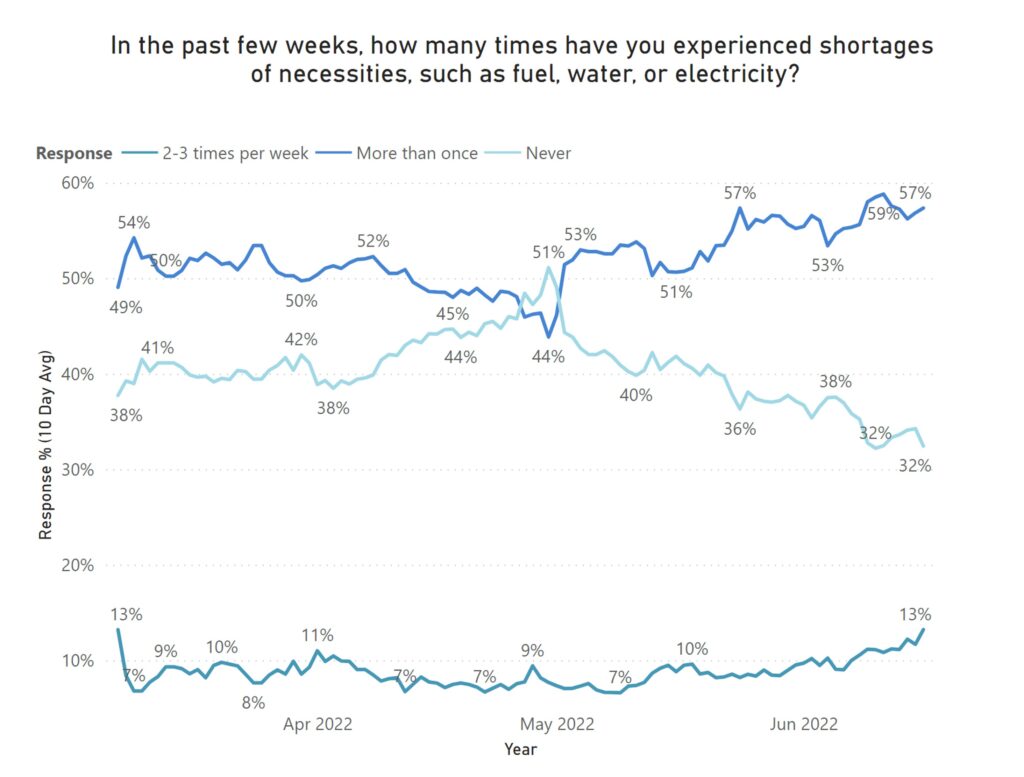 Communication services seem to be fairing slightly better. More than half of respondents (52%) say they have not experienced any phone or internet outages in the past few weeks – up from 32% in early March.

The World Food Programme (WFP) estimates that approximately 1 in 3 households in Ukraine are food insecure. In our study, the strategies families are using to cope with a lack of food or money to buy food have remained relatively consistent over the past four months. The chart to follow compares the results from GeoPoll’s initial survey conducted on March 5 to the data accumulated in the weeks and months since. 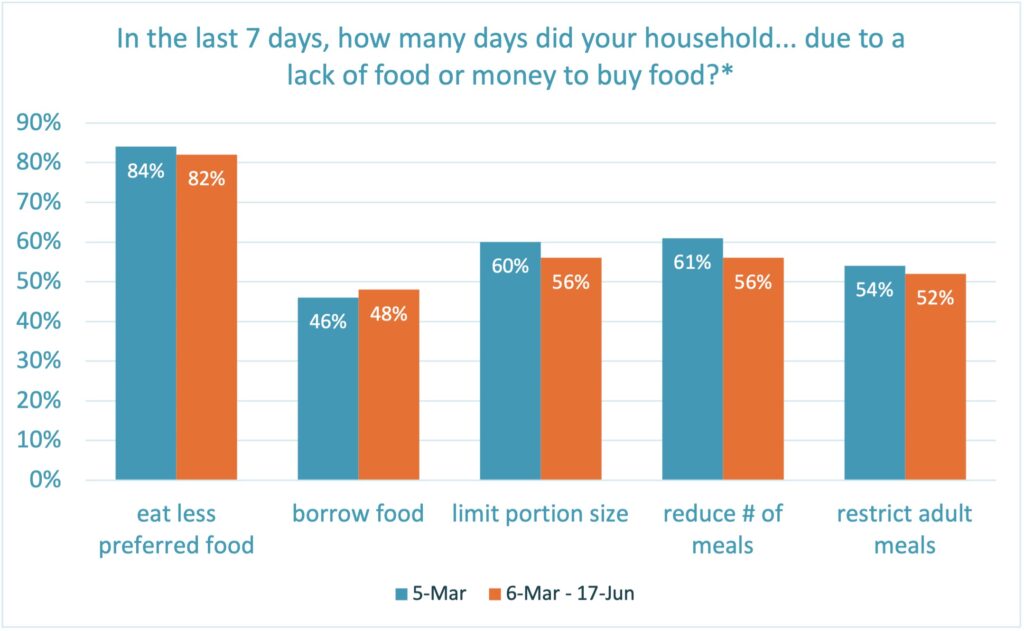 *       The chart above shows the percentage of respondents that used each coping strategy at least 1 out of the past 7 days.

Social media has proven a critical resource for gathering and disseminating information about the war in Ukraine. President Zelensky has effectively used the tool to inform and inspire his own people as well as to communicate with the outside world. Viral photos, videos, and information from government entities and civilians spread quickly across social media platforms, enabling millions to experience the war viscerally on their mobile phones.

In our ongoing research study, reliance on social media as a news source has increased steadily over the past few months. In early March, 69% of respondents reported using social media to follow the news. By April 17, 81% of respondents claimed to be using the platform.

Conversely, reliance on TV as a news source has dropped from 66% in early March to 48% in mid-June. The use of websites has oscillated above and below 50%. 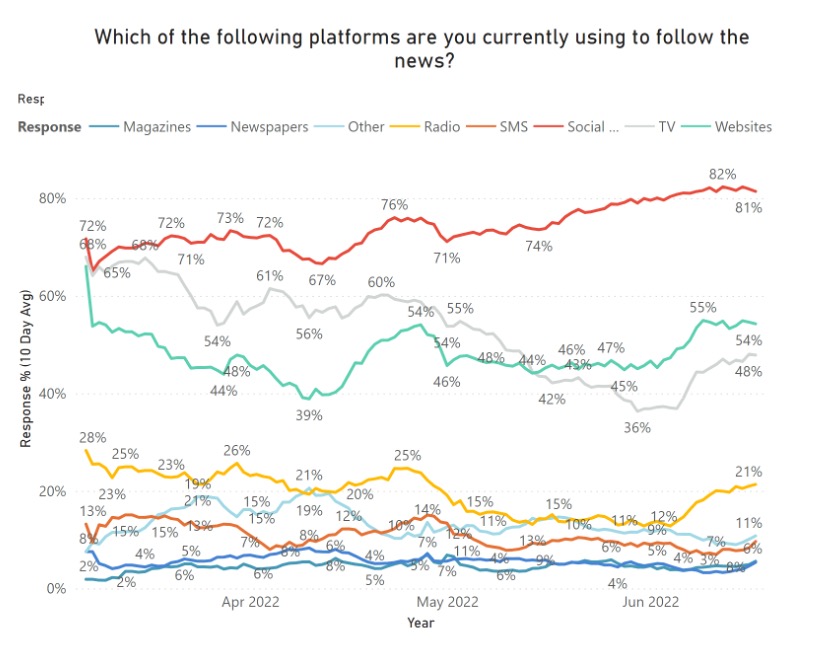 Ukrainians are not the only ones using social media. Russian state media and supporters are leveraging the platform to spread misinformation. Although most social media services have taken steps to remove Russian misinformation, Telegram, which is widely used in both Russia and Ukraine, has not.

The percentage of respondents in Ukraine that had witnessed Russian misinformation campaigns and news was already high in the first week of March at 73%. Since then, it has risen to 78%. 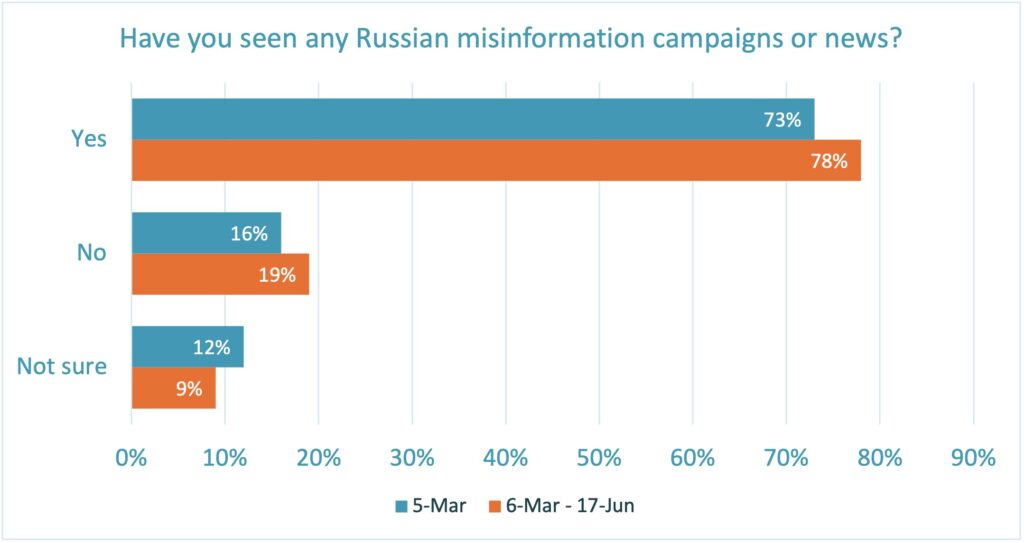 Heavy fighting and restrictions from authorities have made it difficult for humanitarian organizations to reach certain areas in Ukraine. Still, the percentage of respondents in our study that say humanitarian aid organizations are currently in their area to provide relief has climbed from 60% in early March to 82% on June 17. 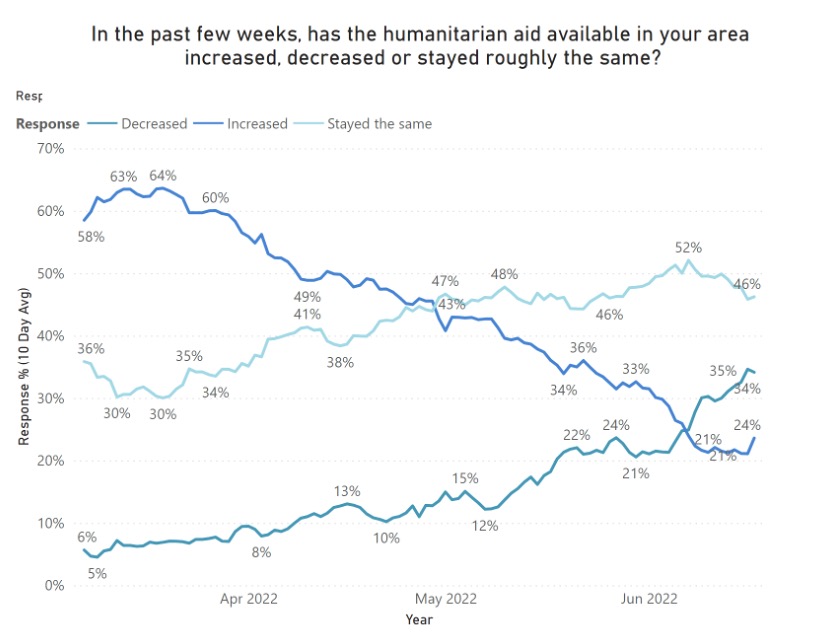 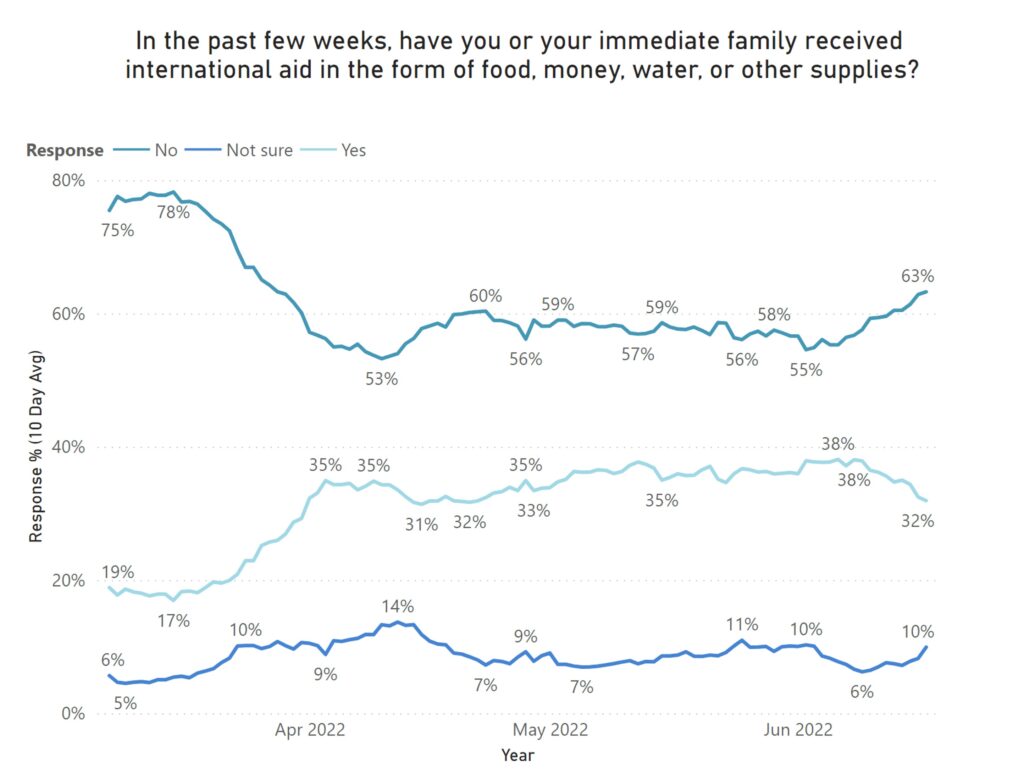 The UN and its humanitarian partners report having reached more than 8.8 million people across Ukraine since the war started. As the situation continues to deteriorate, particularly in the Donbas region, more aid and life-saving assistance are desperately needed.

Gathering information on the ground in Ukraine is critical for assessing humanitarian needs and developing action plans for aid assistance. GeoPoll has extensive experience conducting research in times of conflict and crisis using our remote mobile-based systems and methodologies. GeoPoll can facilitate custom surveys in Ukraine remotely using a variety of modes and deliver results in near real-time. Inquire about running your own custom survey in Ukraine, today.

To track our ongoing data collection in Ukraine, access our interactive data dashboard. The dashboard displays the full results from the ongoing survey, including responses to each question filterable by region, age group and gender, as well as trends over time.

GeoPoll Report: On the Ground Data on the Humanitarian Crisis in Afghanistan