The Russian government’s misinformation campaign about the war in Ukraine started before the first shots were fired. Kremlin news sources initially denied plans to invade Ukraine, despite unprecedented military buildup along the border, then denied it was at war after the invasion began.

In the weeks to follow, Russian state media has continued to wage an information war online and across the airwaves to justify what it has described as a “special military operation” against its neighbor.

International journalists have been forced to flee areas under heavy bombardment as the war intensifies. Photographers for the Associated Press report being targeted by Russian forces in Mariupol before narrowly escaping with the assistance of Ukrainian soldiers. Without reports and photos of the devastation from independent journalists on the ground, disinformation fills the void.

Russian citizens have largely been cut off from private media and social media, including Facebook, Twitter, Instagram and TikTok. The Russian government, however, is leveraging those same platforms to disseminate disinformation outside the country. 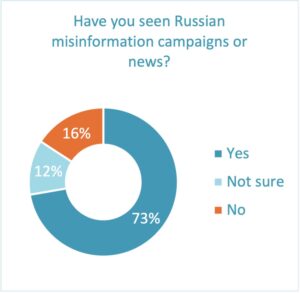 In GeoPoll’s study in early March 2022 on the Russian Invasion of Ukraine, 73% of Ukrainians said they have seen the Russian government’s misinformation campaigns.

Those respondents were then asked to describe the misinformation campaigns they had seen. This post details the open-ended responses to that question.

The primary message or focus of the Russian misinformation campaigns described by respondents in Ukraine can be sorted into the following 12 themes. The numbers in the chart indicate how many times each theme was mentioned. 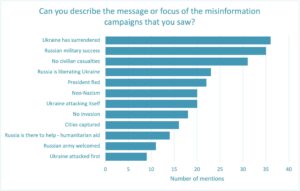 Many of the misinformation campaigns described by respondents attempt to justify Russia’s invasion of Ukraine. Others try to confuse Ukrainian soldiers and citizens and undermine their will to fight.

So far, most of the Ukrainian respondents in our study recognize the Russian misinformation campaigns for what they are. As the information war intensifies and the bombardment of falsehoods continues, however, separating fact from fiction may become more difficult.

To dive deeper into GeoPoll’s data on the Russian invasion of Ukraine, click here to access the report and interactive dashboard. The dashboard provides responses to each question in the survey, filterable by region, age group, and gender.

GeoPoll has extensive experience conducting research in vulnerable areas through remote mobile-based methodologies. In times when it is otherwise impossible to get information from people on the ground, remote data collection can play a pivotal role in capturing the sentiment and realities in hard-to-reach locations.

GeoPoll is continuing ongoing data collection in Ukraine to shed light on the situation and assist in the targeting of humanitarian relief.