In October 2022, the new Government of Kenya lifted a decade-long ban on the cultivation and importation of genetically modified food products (GMOs). The move has split opinions , with politicians and pressure groups clashing with biotech scientists over the safety of consuming GMO foods, which had been the main reason cited for effecting the ban in 2012. This comes on the back of the worst drought to affect the East African region in 40 years, with the government hoping that incorporating GMOs into the food basket will improve crop yields and food security.

It is on this basis that GeoPoll conducted a Rapid Survey at the beginning of November to assess citizen awareness of GMOs, their perceptions on the government approval, information gaps, and concerns that need to be addressed. This article details the results of the survey.

Awareness and concern regarding GMO foods and the Kenya government approval

A big part of the population (86%) is aware of GMOs, likely because of the amount of discussion that has been ongoing since the government recently lifted the ban. Compared to a similar study on GMOs that GeoPoll conducted with the Bill and Melinda Gates Foundation in 2014, this is a significant improvement on the 65% that stated some knowledge of GMOs at that time. 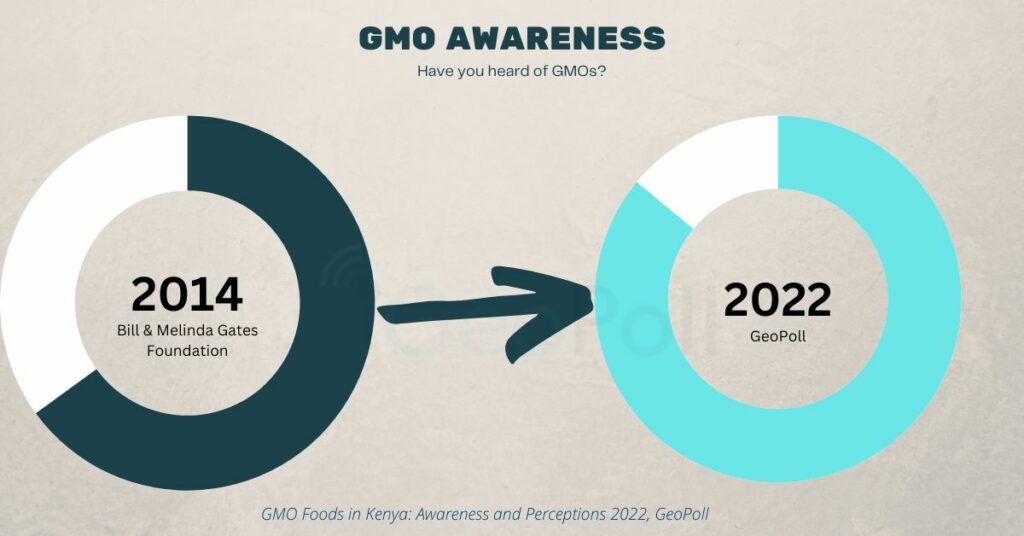 Of those that were aware of genetically modified foods, 91% have heard about the government approval. Just over half of respondents (51%) agree in varying levels with the government’s decision to approve GMOs, while 21% strongly disagree with the decision. 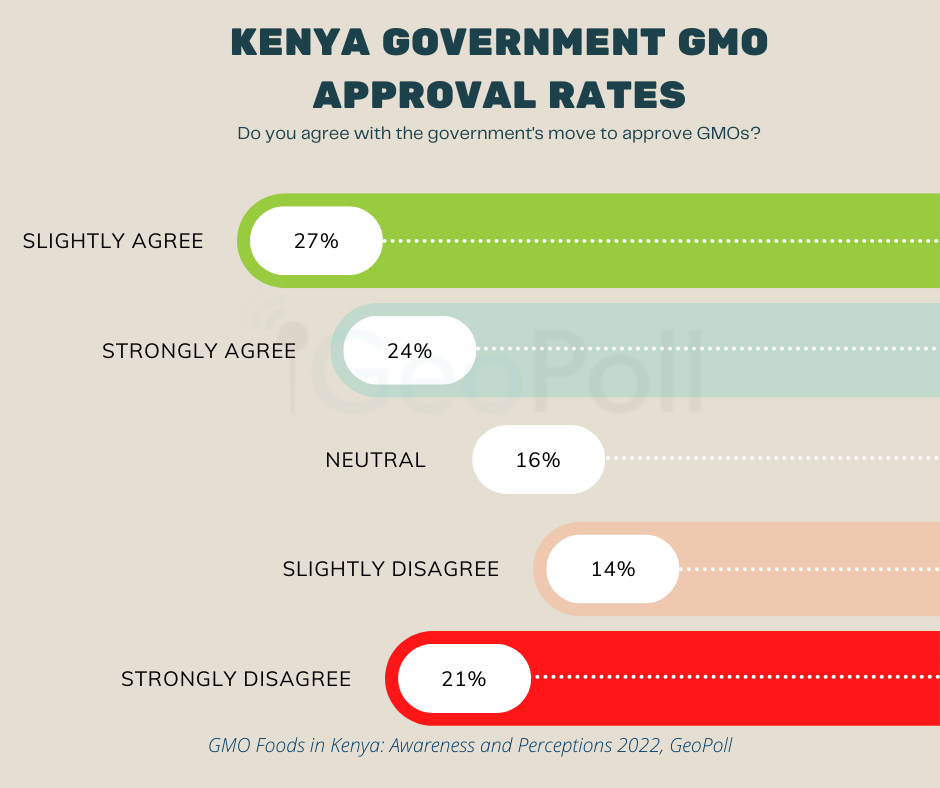 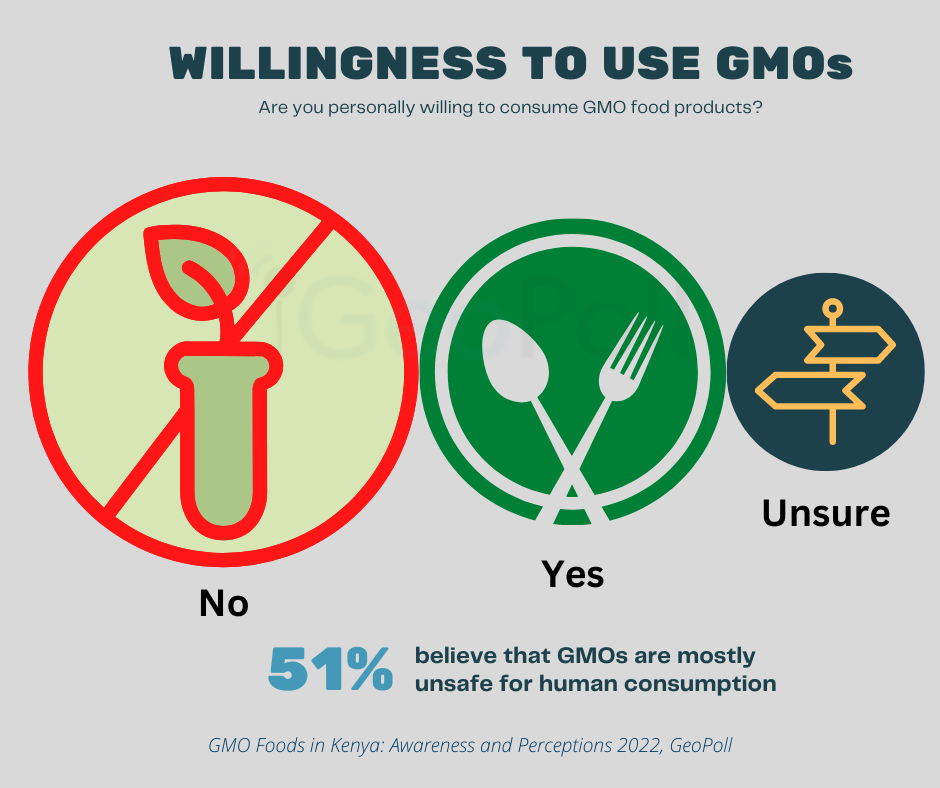 The largest segment of respondents has gotten most of their information about GMOs via television. According to the Kenya Media Establishment Survey 2022, TV is one of the most accessed media channels overall, which may explain why it has the largest individual reach. However, online sources (social media and other websites) combine to provide the largest source of information about GMOs to a significant number of Kenyans. Given that online channels are largely unregulated, could this create an environment for fake news and misinformation which may further fuel unverified information and myths regarding GMOs? 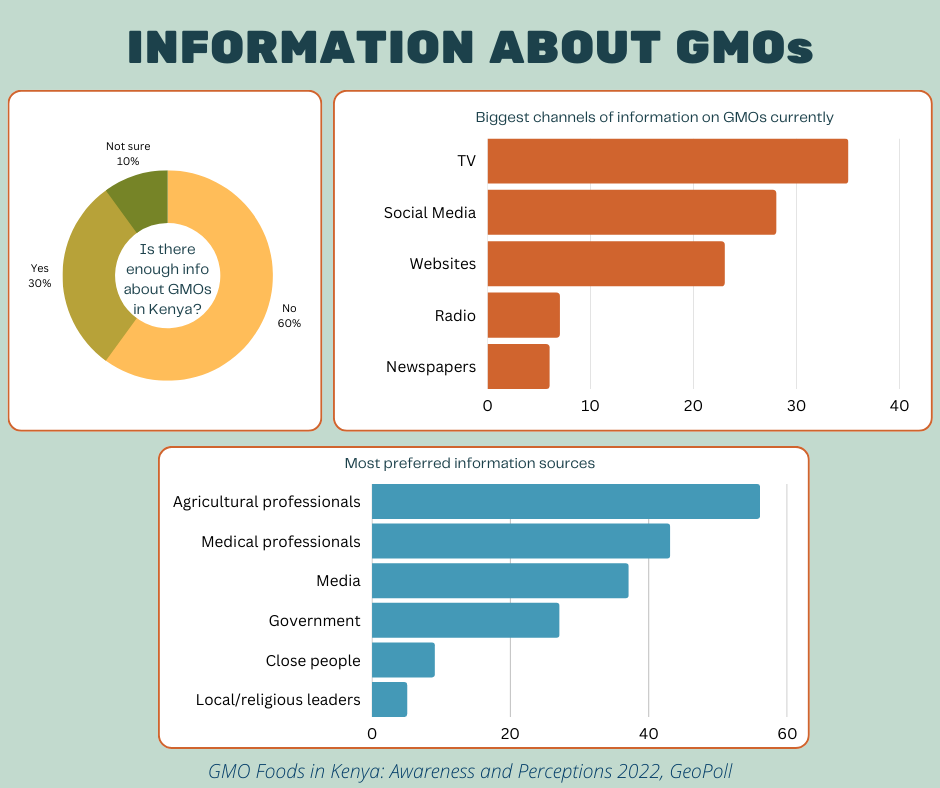 Over the course of human existence, food compositions have been changing. Genetic modification of food, however, is a relatively new technology. Officially, the first GMO technology was developed in 1973 with the first FDA regulation framework coming about a decade later.

Like anything new, there are conflicting viewpoints about many issues surrounding the use of GMO foods. One area that draws a lot of attention is whether they are safe to eat. Some studies in the past have attributed GMOs to health concerns, but they have mostly been discredited by health and biotechnology experts. In GeoPoll’s study, over half (51%) believe that GMOs are mostly unsafe for human consumption – 27% believe they are safe, while 22% need more information to make up their minds. 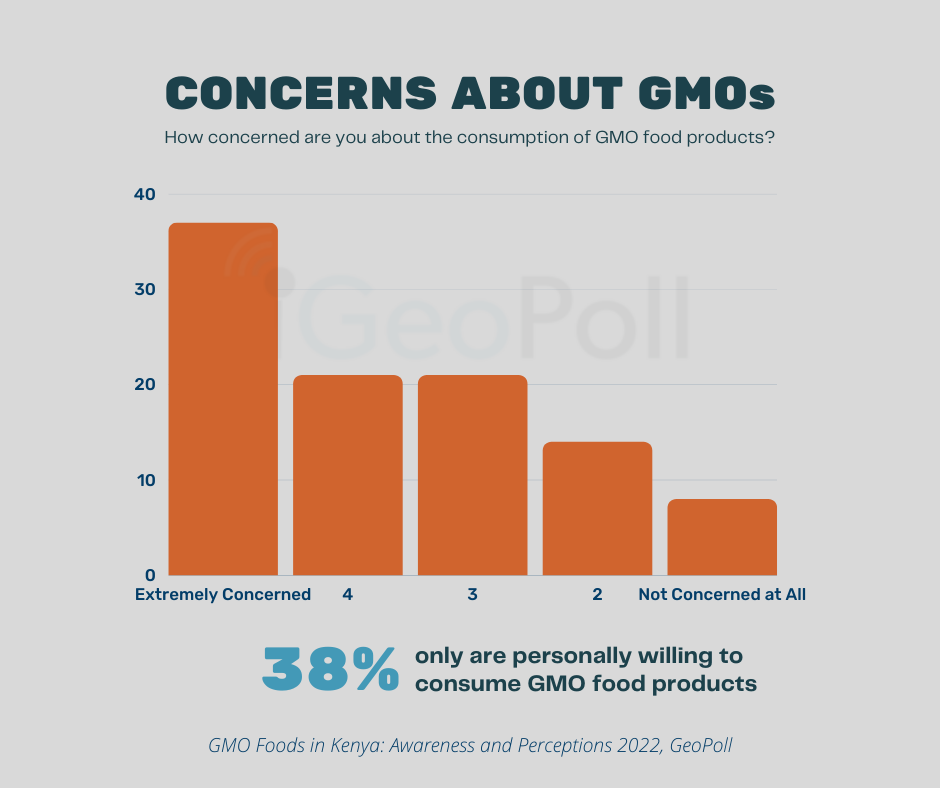 Concerns about safety may stem from the supposed disadvantages of genetically modified foods cited by respondents. The largest proportion (59%) believe GMOs may lead to unexpected or harmful genetic changes, while 51% fear they can cause diseases such as cancer. Twenty-five percent of respondents claim GMOs have less nutritional value.

Several research sources indicate that GMOs have several benefits to nutrition, global food security, and the climate. According to the FAO, humans will need to produce 70% more food to adequately feed the global population by 2050, and innovative approaches such as genetically engineering our food will be required to solve this problem.

For respondents, the advantages cited most often are that genetically modified plants and animals grow faster (48%) and are more drought-and disease-resistant (43%) – hence better for Kenya’s food security. That follows GeoPoll’s study from 2014 in which 48% of respondents believed GMOs could have a high or very high impact on reducing hunger in Kenya. In this study, 27% also believe GMOs may be less expensive, which would be a significant advantage given the ballooning cost of living. Another 24% like that GMOs typically use less pesticides. 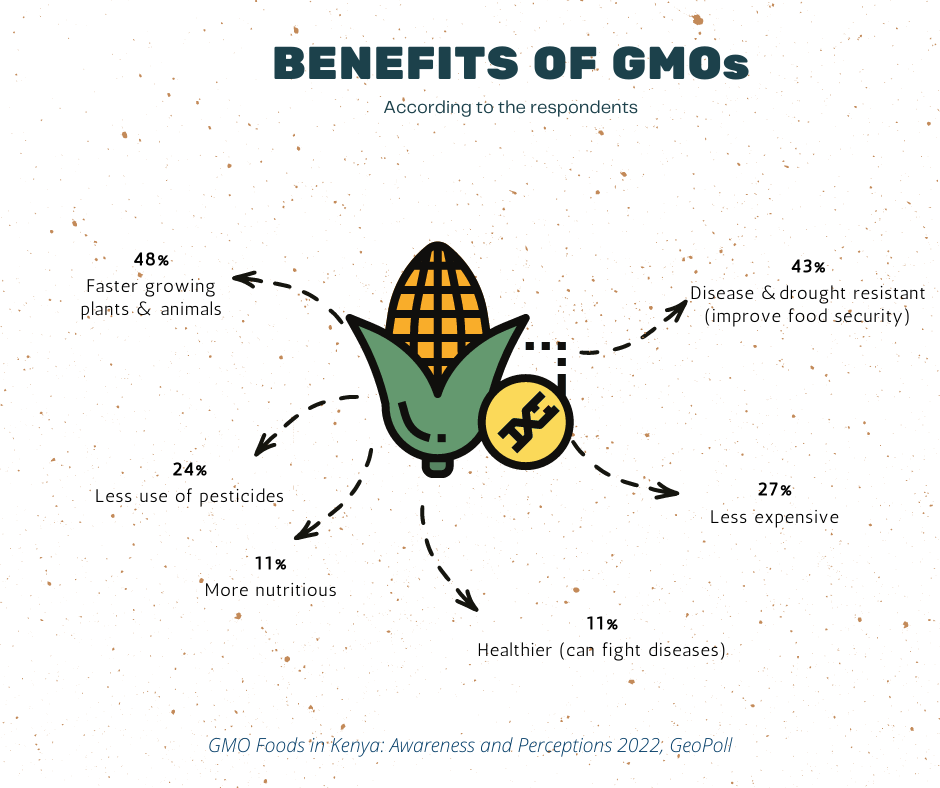 The conversation about genetically modified foods is here and debates will be swirling for some time. Indications from this survey are that GMOs are highly misunderstood. For GMOs to take off, not just in Kenya, but in all nations where GMOs are still in infancy, it is imperative for governments, food and agricultural organizations, and the medical fraternity to heavily engage the masses, both in education and addressing their concerns.

In the meantime, food security and the quality of food remain important to most people. When we asked respondents if the food quality is better or worse than in the past, 57% said food is worse.

About this GeoPoll survey

This Rapid Survey was run via the GeoPoll mobile application between 3rd and 4th of November 2022 in Kenya. The sample size was 708, composed of random App users between ages 18 and 60. Since the survey was randomly distributed, the results are slightly skewed towards younger, male respondents.

To get more details about rapid GeoPoll surveys or to conduct a scientific study on food security and agriculture, public health and nutrition, or other topics in Africa, Asia, and Latin America, please contact us.