GeoPoll is pleased to release the Kenya Establishment Survey Report 2022. The establishment survey comprehensively covers all media touchpoints in the country, establishing audiences for each media and diving into details such as the intensity of engagement, the channels used, and how each channel is consumed, among others.

Drawing experience from the GeoPoll Audience Measurement service which has been powering important decisions for media houses, brands, and agencies around the world for close to a decade, the Kenya Establishment survey provides some of the most comprehensive media insights in Kenya yet.

This year’s establishment survey is different in many ways. Since the digital migration, there has been a steep rise in the number of new local television stations offering niche content, either by genre, demographic target audience, or language. Television viewership today is largely accessed via Pay Television set-top boxes, despite the availability of free-to-air set-top boxes, which has also contributed to an increased viewership of foreign stations.

The fragmentation of media at a regional level also means the need to understand media habits at sub-regional levels is imperative for any media decisions.

The most significant change, though, has been the way we consume media. The rise of the smartphone has revolutionized how people access and interact with media, such as listening to the radio, watching television, accessing the internet, streaming video, listening to music, reading print media, and more.

Because the mobile phone is an on-the-go device with a diverse range of offerings, there is increased access to media and, importantly, competition for attention. For example, people watch TV while using their phones, and smartphones command eyeballs that may have otherwise viewed Out of Home advertisements such as billboards.

The Kenya Establishment survey 2022, therefore, delves into penetration beyond only traditional media. We have looked at TV, radio, and print (newspapers and magazines), as well as the mobile phone, the internet, subscribed video on demand (SVOD), pay TV, social media, messaging apps, free online videos, podcasts, and streamed music.

Beyond the media: other topics covered

While conducting the establishment survey, we took the opportunity to interview respondents on topics such as financial services (savings, mobile banking, loans, banking, insurance, pension, and digital currencies), e-Commerce, and gambling. We also looked at consumer purchasing habits for soft drinks, milk products, personal care, and washing powder, making this study one of the most comprehensive in understanding Kenya through media and day-to-day activities. 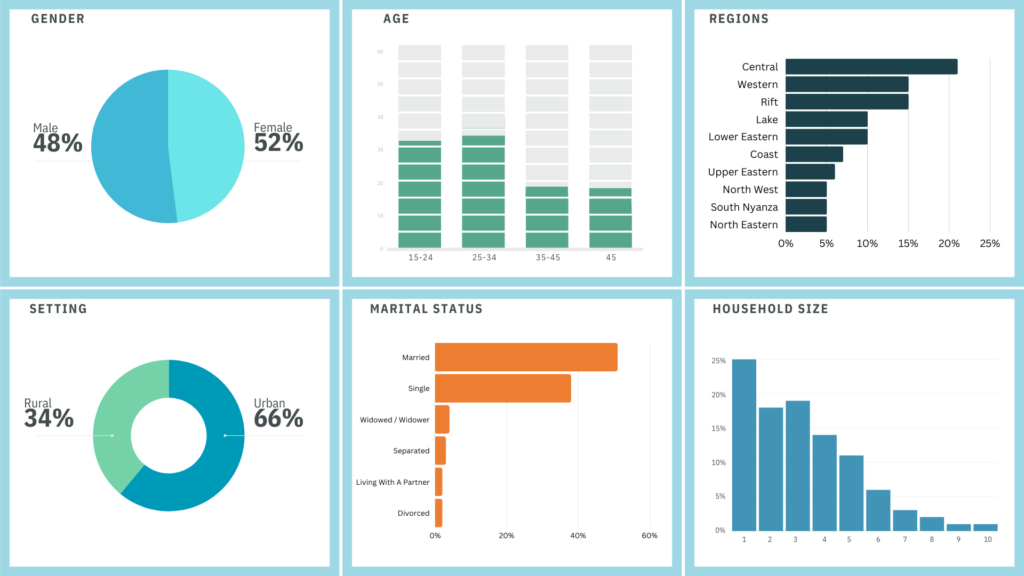 The sampling design covered all 47 counties with the number of interviews spread by the population size of each county. To ensure a representative geographical distribution and to cater to media channels with lower penetration, we proportionately covered the entire country to the sub-county level.

The sampling and data collection methodology we incorporated significantly increased the scientific representativeness of the study to boost our quest to produce the most comprehensive media insights in the country.

Get the Kenya Establishment Survey Report

The Kenya Establishment Survey report is available in several formats, including:

Talk to us to learn more about the Kenya Establishment Survey and discuss the best report for your needs or fill out the form below to request more information.

The GeoPoll Audience Measurement service began in 2014 and is widely acclaimed for its unique mobile-based methodology, which provides next-day audience measurement data for TV, radio, and print from multiple emerging markets in Africa, the Middle East, and the Caribbean; enabling media houses, brands, and agencies to more accurately target their audiences and measure ROI of advertisements.

Key Statistics on GeoPoll Media Audience Measurement over the years (up to July 2022):

GeoPoll Media Audience Measurement is improving to broaden the channels covered and deliver deeper insights in line with the changing times. Talk to sales to understand what’s changing.