How Rising Food and Fuel Prices are Impacting the World

Multiple factors in the past few years have combined to create the cost of living crisis. In the past few months alone, higher-than-expected inflation rates and skyrocketing prices of essentials in most countries have pushed tens of millions of people in the developing world into poverty according to the United Nations Development Programme.

Despite enduring multiple waves of COVID-19 throughout 2021, many parts of the world showed promising signs of economic recovery. In early 2022, Russia’s invasion of Ukraine along with a sharp downturn in China halted much of that progress. Experts now project global economic growth to slow from an estimated 6.1 percent in 2021 to 3.6 percent in 2022 and 2023.

One of the results has been the rise of prices for essential commodities mostly stemming from increases in energy prices and bottlenecks in global supply chains. In this article, we dive into the findings of the GeoPoll Report on the Global Cost of Living Crisis to enumerate the experiences of citizens in nine countries, and what the impact has been.

All nine countries in our study have experienced significant price increases. Overall, 85% say prices of goods and services have increased in the past 6 months, with a staggering 67% saying prices have “increased a lot.”

This runaway inflation is, understandably, worrying for most people. The largest segment of respondents in every country say they are “extremely concerned” about rising prices. The percentages range from 32% in Tunisia and Guatemala to 82% in Sri Lanka.

More than 3 out of every 4 respondents in South Africa (77%), Kenya (79%), and Nigeria (80%) report feeling extremely concerned about rising prices.

The majority of respondents (75% overall) in all nine countries agree that food prices have increased a lot in the past six months, illustrating the scope and severity of the crisis.

In Kenya, 89%,  claim the price of food products has “increased a lot” in the past 6 months underscoring the fact that the inflation rate in Kenya reached a five-year high in August, primarily driven by an increase in food prices. Only Sri Lanka shows a higher percentage (96%). Skyrocketing food prices in Pakistan, where the average household spends more than 40% of its income on food, have pushed many families to the brink. With 85% of respondents in Turkey saying food prices have “increased a lot” in the past 6 months, even food staples have climbed out of reach. 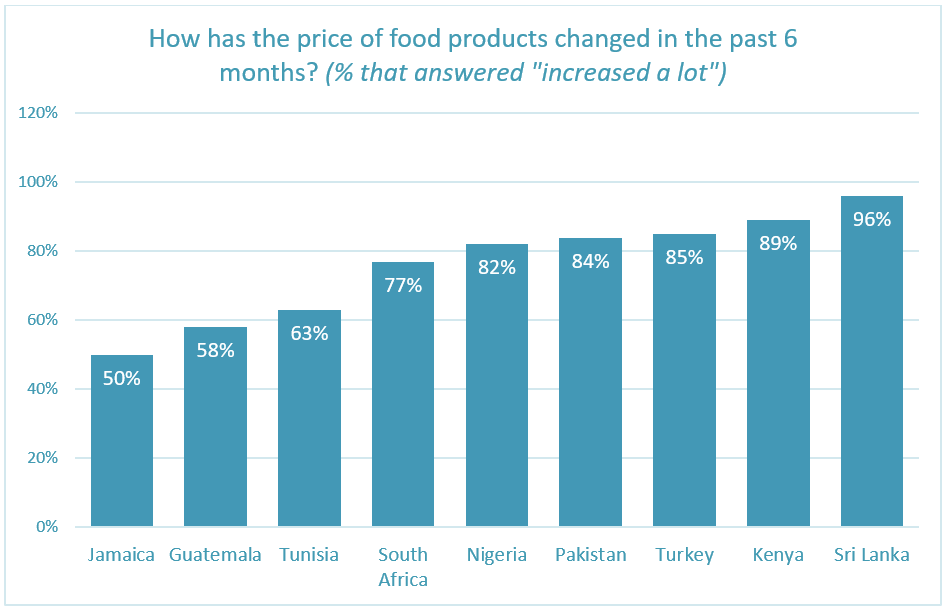 Overall, meat/eggs/fish surface as the type of food products that have increased the most in price (50%), followed closely by cooking gas/fuel (47%) and cooking/edible oil (47%). You can see the full lineup of foods by increase in prices in the dashboard.

What does the rise in food prices mean for food security? 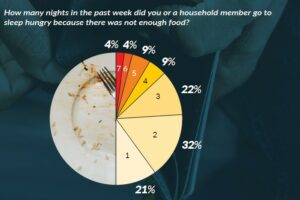 The ultimate impact of rising food prices is that vulnerable populations cannot afford to feed their families. In our study, 1 in 4 respondents overall says they or a household member has gone to sleep hungry in the past 7 days because there was not enough food. That number rises to 44% in Kenya and 36% in Nigeria. The Integrated Food Security Phase Classification (IPC) estimates that 3.1 million Kenyans are facing acute food insecurity.

This is a signal for governments and humanitarian organizations to step in an avert the nutrition and starvation crisis that these populations are staring at.

Runaway price increases have not been confined to food products. Most respondents across countries are feeling the pinch in almost every aspect of their lives. 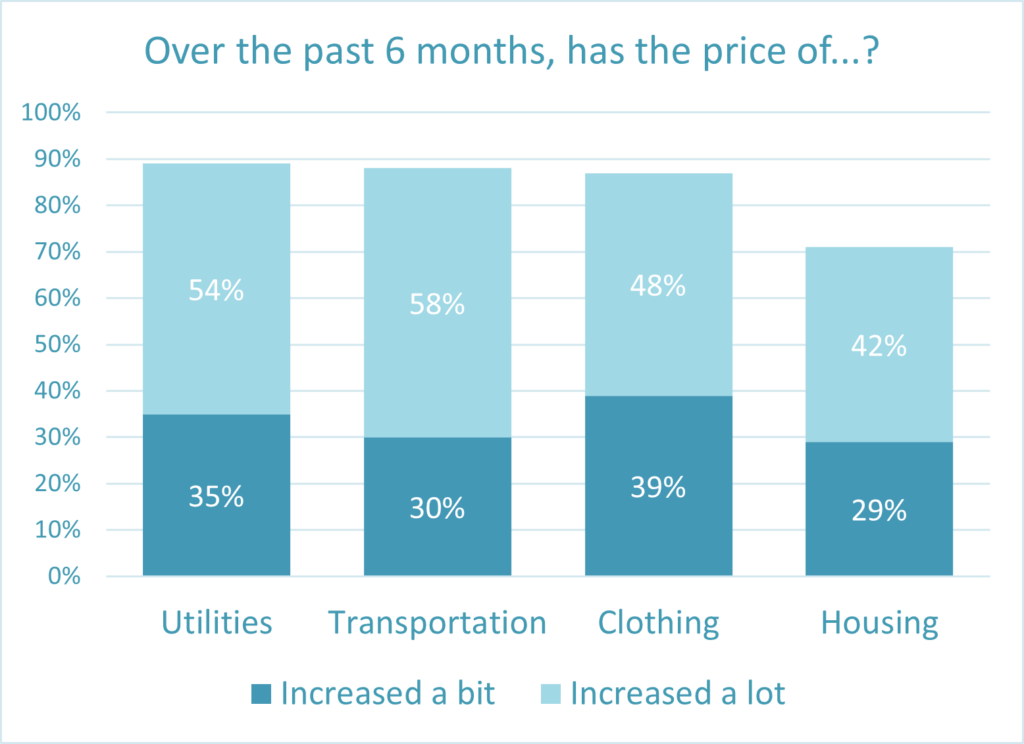 Russia’s invasion of Ukraine has turned an already tight energy market into a global energy crisis. Fuel shortages are raising both utility and transportation costs in import-dependent Sri Lanka and Pakistan. More than 8 in 10 respondents in Sri Lanka and 7 in 10 in Pakistan say their utility costs have “increased a lot” in the past 6 months. Power cuts and blackouts have become common in both countries.

Overall, only 2% of respondents say the price of utilities, transportation, clothing, or housing has decreased even a bit in the past 6 months.

Get the full report