Kenya goes into the General Election 2022 on August 9th. To gather insights into some of the aspects surrounding the election, GeoPoll ran an internally sponsored opinion poll covering a number of topics, which we are pleased to release in this report.

The voter turnout for the 2017 Kenya General Elections was 79.51%. This year, according to our survey, 92% of registered voters answered yes to the question “Do you intend/plan to participate in the upcoming elections on August 9th, 2022?” Five percent said they do not plan to vote, while 3% were yet to make up their minds.

A growing voters base: 29% will be voting for the first time in this election.

Battleground: A good number of voters are still undecided

With a week to the elections, only 67% on average are decided on who to vote for (for all seats except the presidential election). More than 1 in 4 (27%) are still undecided and 2% plan to go with the 6 piece – voting for their party candidates.

When the respondents were asked if they feel able to access all the true/accurate information they need about the 2022 General Election, 56% replied in the affirmative. A significant 26% responded “no” and 13% claimed to be unsure.

The media plays a critical role in any democratic and governance process, and it is imperative that news and information around elections be credible to guide the decisions of the voters. But trust is relative and can be tied to the perceptions the people have of the media channels.

In this survey, most people said they trusted TV (60%) and radio (55%) to provide the most credible information. In an environment where blogs are considered too informal and unregulated, news websites were the least trusted.

This survey was conducted in person by trained enumerators between July 19 and August 2, 2022 using GeoPoll’s Computer-Assisted Personal Interviewing (CAPI) mode. It is a nationally representative survey meaning that GeoPoll proportionately covered the entire country to the county and sub-county levels, deriving the sample from population data from the 2019 Kenya National Bureau of Statistics Census. 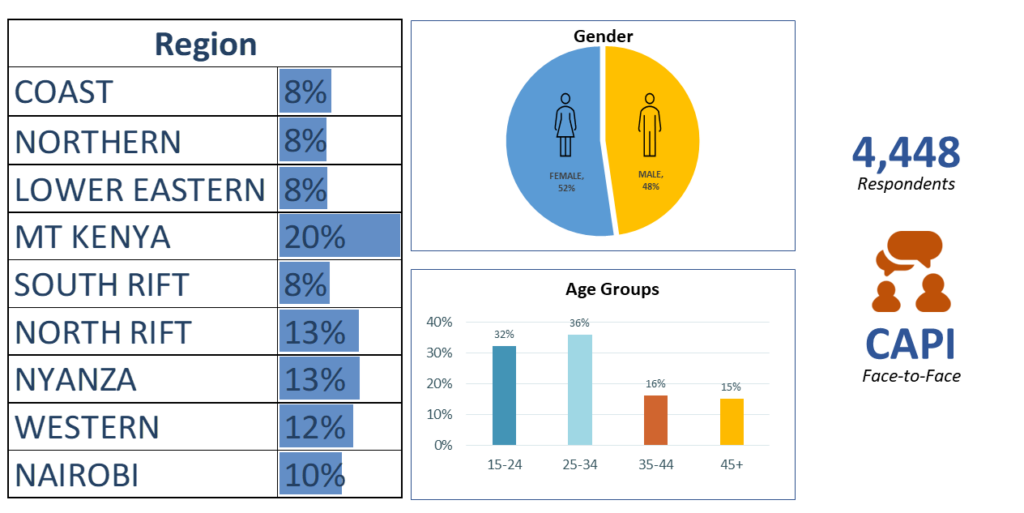 If you have questions or would like more information about this survey, the methodology used and the sampling frame, please contact us via info-at-geopoll.com.