GeoPoll Report Supplement: The Impact of Education and Employment on Climate Change Perceptions in the Caribbean

In April and May 2022, GeoPoll conducted an SMS survey across 13 countries in the Caribbean to assess residents’ perceptions about climate change.  The initial free report from that study along with an interactive dashboard of all the data are available here. The dashboard provides responses to each question in the survey, filterable by country, age group, and gender. 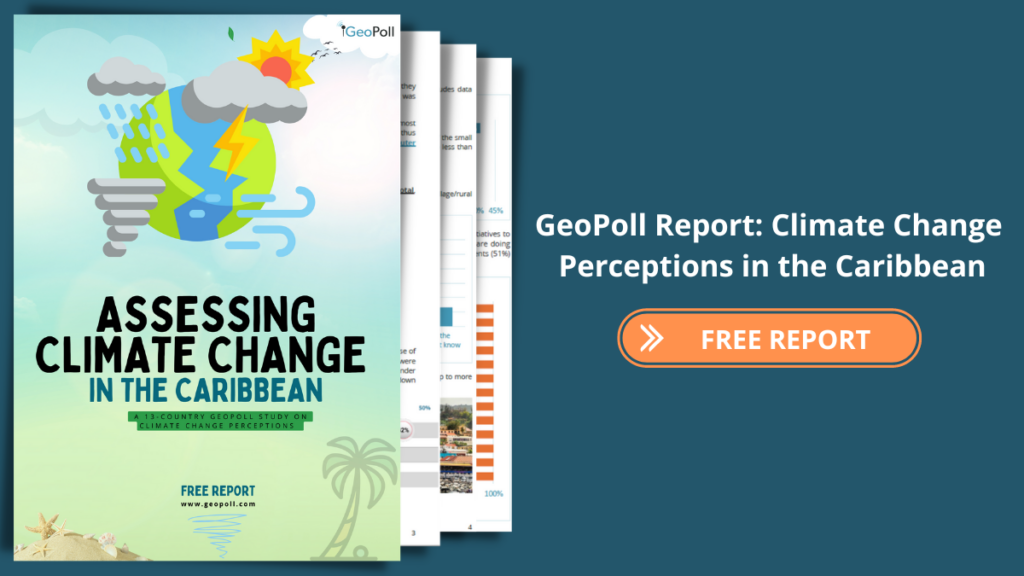 This post takes another look at the data, exploring the potential influence of education and employment on climate change perceptions.

Most Caribbean residents believe climate change is happening. Diving deeper into the data shows that belief in climate change increases incrementally with educational level, while uncertainty decreases. According to the UN, education is a critical agent in addressing the impacts of climate change. 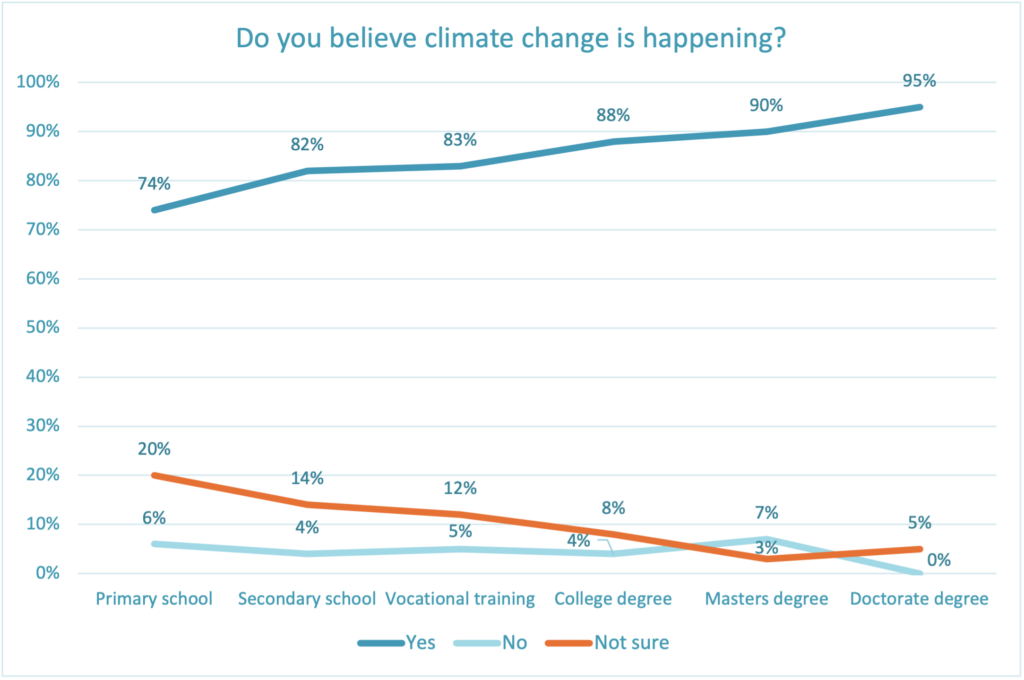 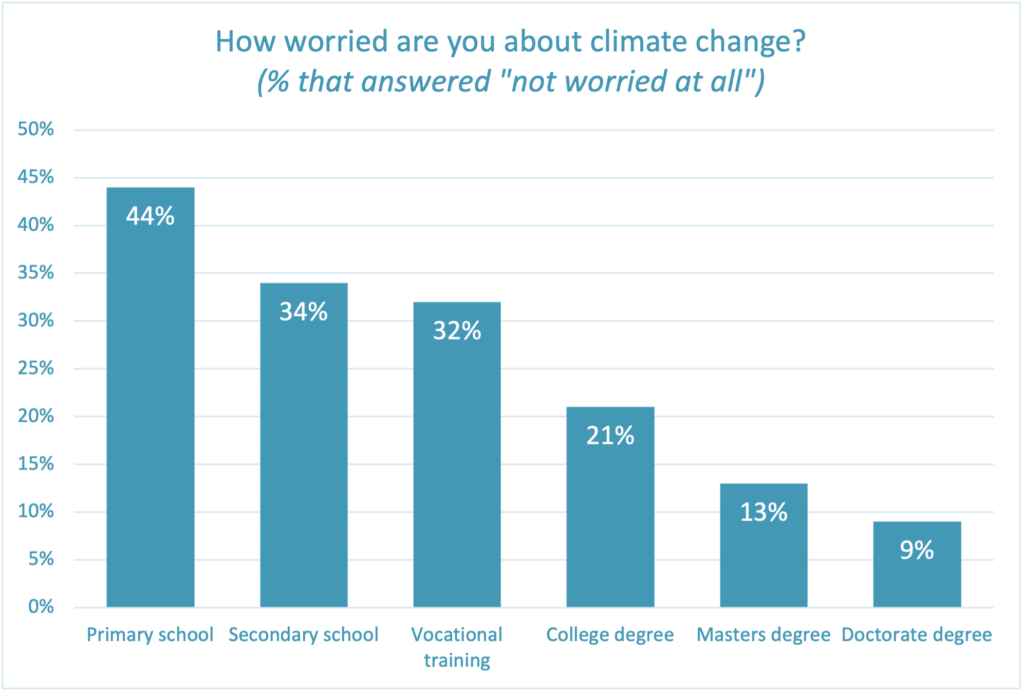 The consequences of climate change disproportionately impact the most vulnerable populations, furthering inequality. In lower income countries like many in the Caribbean, poorer communities are often the hardest hit by climate catastrophes and the least equipped to adapt and recover from them. In our study, respondents with less education, which shows a positive correlation with poverty and inequality, are more likely to say they have personally experienced the effects of climate change than more highly educated respondents. 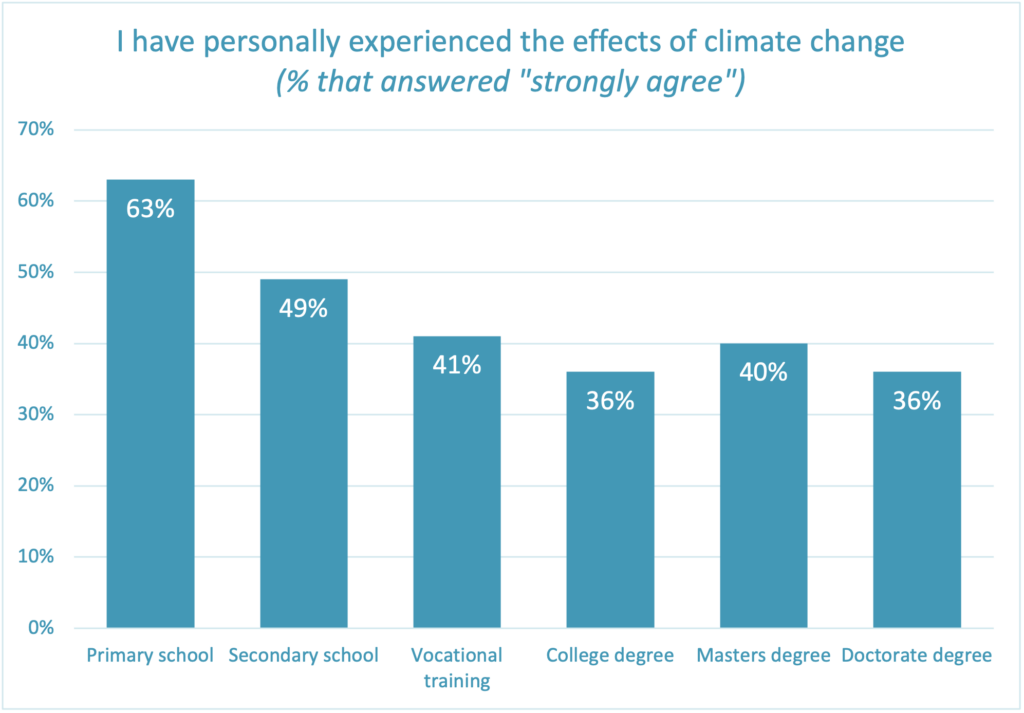 Less educated respondents are also more likely to have moved or plan to move due to the effects of climate change. As extreme weather events, coastal flooding, and erosion increase, Small Island Developing States (SIDS), like those in the Caribbean, project to be some of the fastest displaced populations across the globe. 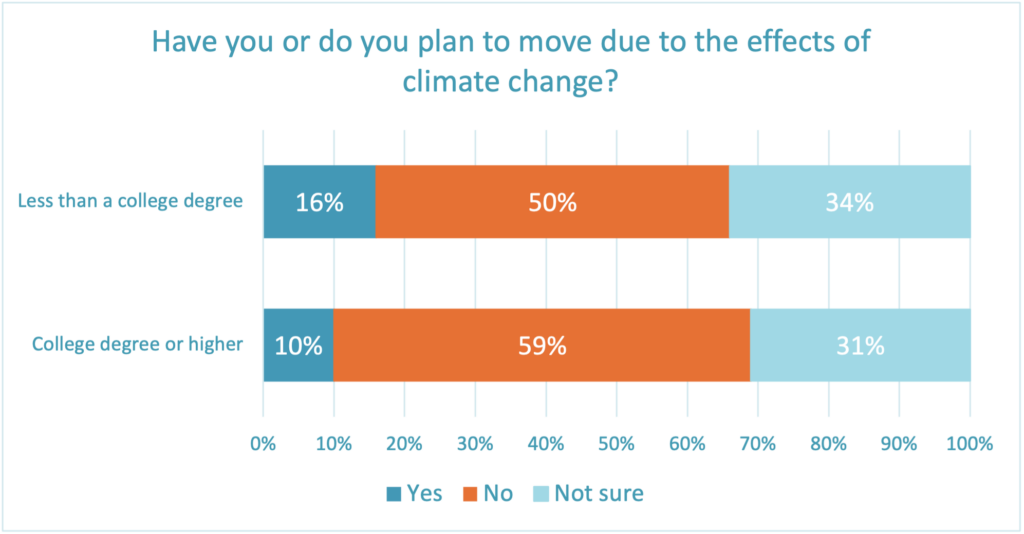 The same pattern applies to respondents that are currently unemployed/retired versus those that are employed full time. 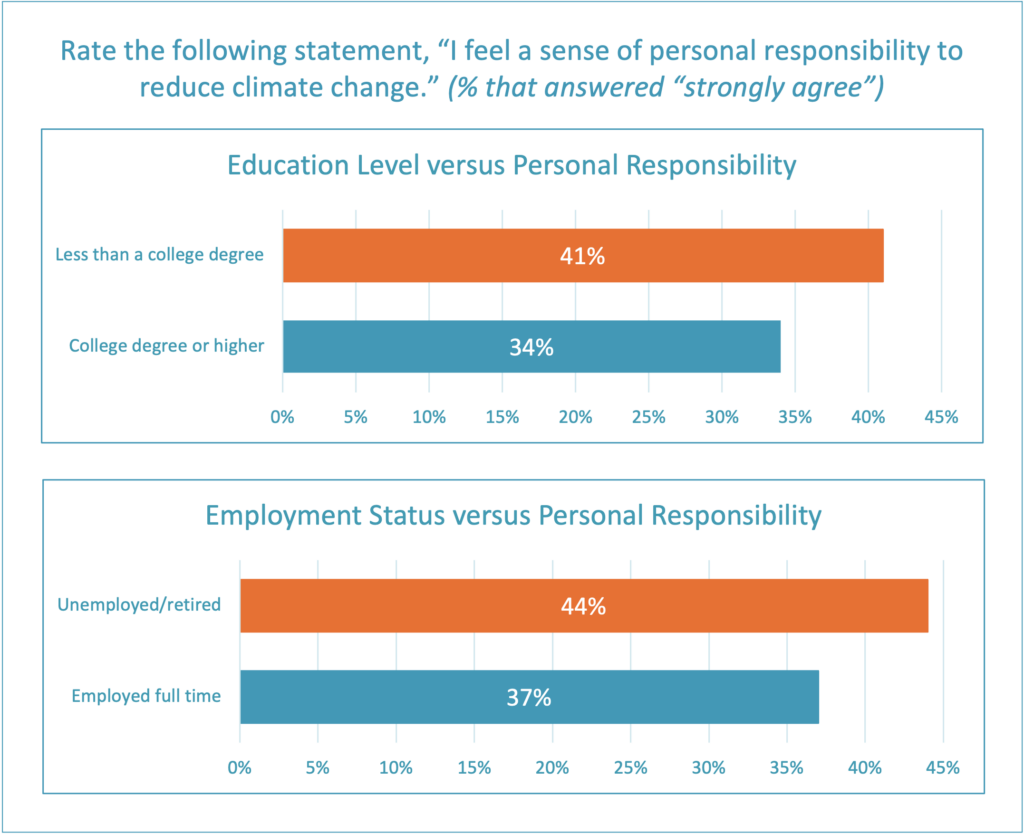 Looking towards the future, respondents with less education more strongly agree that climate change poses a “very high risk” to the Caribbean in the next 10 years – as do respondents that are currently unemployed versus those that are employed full time.

Assessing the influence of education and employment on climate change perceptions in the Caribbean surfaces several interesting patterns. Although respondents with college degrees and those that are employed full time exhibit higher levels of awareness that climate change is happening, they are less likely to have personally experienced the effects of climate change or to feel a sense of personal responsibility to reduce climate change. This suggests that increasing awareness alone is not enough. Opportunities exist for governments and environmental agencies to help citizens from all backgrounds to internalize the oncoming risks of climate change (without having to personally experience the effects) and to become more personally involved in climate action.

This study was implemented by GeoPoll using our own mobile research platform and respondent database. The questionnaire was designed by GeoPoll researchers and conducted via SMS across 13 Caribbean nations.

Conduct Research in the Caribbean with GeoPoll

With the 2022 Atlantic hurricane season currently at hand, the Caribbean once again finds itself in harm’s way. In times of natural disaster, NGOs, governments, humanitarian groups, and other stakeholders in the development and relief sectors turn to GeoPoll for fast and affordable data collection. Our unique remote research system and methodologies, robust database, and direct integrations with mobile network operators enable us to reach affected populations otherwise cut off from the world.

To learn more about GeoPoll’s capabilities and coverage in the Caribbean, please contact us today.