The global media market is worth just over two trillion US dollars, and growing fast. The digitization of the media and the proliferation of mobile-based media platforms is a big driver of this growth, especially in developing markets where huge numbers of people are joining the digital revolution every day.

But despite this growth, in most developing markets it is still traditional media like TV and radio that attract the most advertising spend and attention from strategists. Forays into new media channels, as well as new approaches such as programmatic advertising, are tentative at best. This is a massive opportunity for media practitioners that is being held back in part by a lack of actionable audience data.

The first radio audience ratings were released in the USA in 1947, and much of the audience research being conducted in Africa and other developing markets in 2022 would be strikingly familiar to the Nielsen pioneers who developed them. The focus is on traditional media, each media type (TV, radio and print) is assessed in a self-contained bubble with no influence on the others, and audiences are measured at household level as if we all live in nuclear families that sit down together every night to watch TV.

That’s not how the new media works. We don’t consume media any more, we are immersed in it. Channels have proliferated and permeated all aspects of our daily lives. They compete for our attention like brands in a supermarket, and it is this perspective that inspired the GeoPoll Attention Landscape model. Designed for the developing market in the 21st century, our model has two key features:

Since developing the model in 2021 we have run bespoke Attention Landscape surveys for multiple clients in several developing countries, for clients and partners ranging from media agencies to NGO’s. One such partnership has resulted in cross-platform measurement and insights data for Botswana, Namibia, Lesotho, and Eswatini media audiences.

The Namibia study was conducted via mobile web in March-April 2022, the first media audience research of any sort to have been conducted in this country since 2019. Being a web-based survey the audience being measured are “connected” Namibians, approximately the 50% most affluent and urbanized part of the population. So this is not nationally representative data, but it does reflect the most economically active audiences and paints a picture of future trends as connectivity increases further.

While a lot of digital activity is to be expected from online survey respondents, it is significant that they are occupying around two-thirds of the audience’s collective media attention across all the markets. Namibia is an outlier, however, as it has by far the strongest print sector of any of the markets we have researched. Channel Analysis reveals that there is one title primarily responsible for this strength – The Namibian:

An independent publication with a reputation for fearless investigative reporting, The Namibian is, after Facebook and Instagram, the media channel that attracts the most collective attention from the connected Namibian population across all platforms. Radio, by contrast, is a very cluttered landscape with government offerings in ten different languages and a strong competitive set of independents competing for a relatively small share of total attention:

TV is less fragmented than radio, but the way we interact with it, even our understanding of what TV is, is changing. Traditional audience measurement techniques and devices are good at counting the number of traditional TV sets that are tuned to a specific channel, but is that enough data to guide crucial media planning and strategy decisions?

How many of us have the habit of “watching” TV while using a mobile phone, to the extent that we have no idea what is on? In Namibia, and everywhere else we’ve measured this, it’s about half the TV audience:

In such a dynamic, complex media environment the best strategy might be to focus on content. Our Content Analysis component allows us to understand what is driving audiences to each channel in the first place. For example, among female Namibians the single biggest driver of media engagement across all channels is job hunting on the internet:

GeoPoll provides interactive reports for our Attention Landscape surveys to give viewers full control of the data they want to see. The data can be filtered by aspects such as gender, age, profession, household income, location, and more to give a deep dive into actionable media insights. 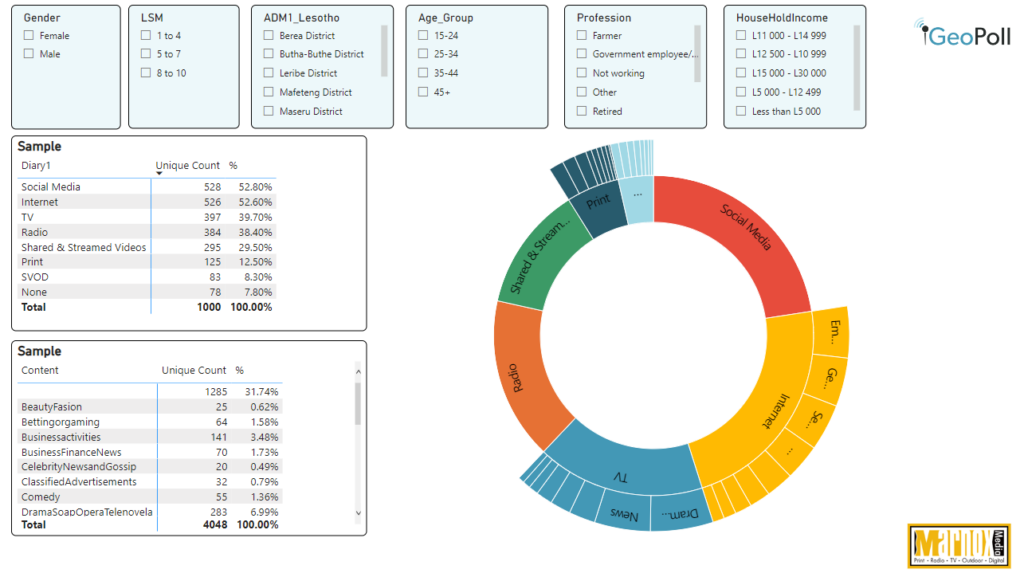 Fill out this form to grab an up-to-date Attention Landscape dashboard for free:

Marnox Media is an independent Media Representation Company connecting Advertisers with Media Owners across the African continent for the past 20 years. We implement Advertising campaigns for our clients from “Brief to Flighting” in both Traditional (Radio, TV, Print, OOH) and on Digital Media Platforms.

GeoPoll’s Attention Landscape measures and analyses all media touchpoints in terms of their competition for the audiences’ attention. Bringing a new perspective to media insights, our Attention Landscape model maps out the touchpoints across both traditional and new media and goes beyond audience numbers to explore how and why they capture attention. Contact GeoPoll to learn more.