Pakistan is one of the most populous countries in the world, housing over 200 million people, and is a country of interest for many sectors due to its strategic geolocation, growing middle class, and diverse cultural history.

GeoPoll recently ran a survey in Pakistan to gather information on citizen’s perceptions of climate change, conflict in the region, female empowerment, social media usage and other key topics of interest in the country. GeoPoll gathered 379 completed surveys via SMS from across the country in order to answer questions on these topics and is pleased to share the results here. Read the summary below or jump to the full, interactive dashboard of results.

Climate change is a topic of increasing concern in Pakistan, which has suffered from an increase in floods and drought in the past years and is counted as one of the top 10 countries most affected by climate change. When asked about their level of concern over the effects of climate change in Pakistan, the largest portion of respondents, 37%, rated their concern level at 10, the highest level. Interestingly the next highest portion of respondents listed their concern at a 1, for “not at all concerned” indicating there may be differences in awareness over climate change depending on region, education level, and other factors which could be further explored through future research. 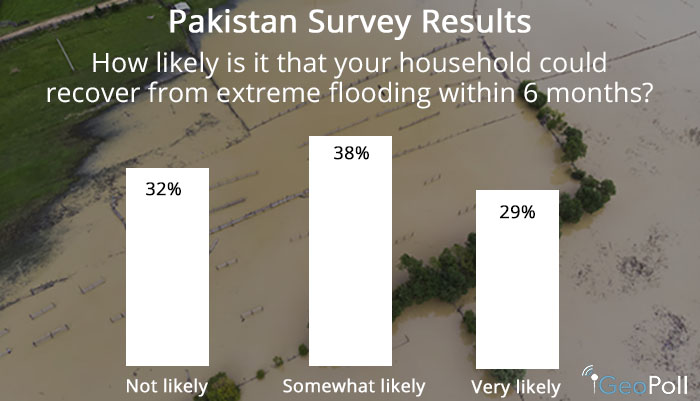 As flooding has been one of the most visible consequences of climate change in Pakistan, we asked several questions on respondents’ ability to recover if they were to experience extreme flooding. In terms of recovery following flooding, 39% think it is somewhat likely their household could recover fully within 6 months if they experienced extreme flooding, and 33% thought it was not likely at all that their household would recover in that timeframe. Local government was listed as the most popular source of help in the event of flooding, followed by the military and religious groups.

Respondents were asked several questions about their communities and the economic growth in Pakistan. In term of community improvements, education was selected as the service most in need of improvement, with 37% of responses, followed by water with 23% of responses. Responses were quite split on economic growth, with 32% saying the level of economic growth in Pakistan is high, and 29% saying there has been no growth at all. Approximately 61% listed growth on the lower end of the scale, between 1-5 out of 10.

Despite the majority of respondents believing there has been low growth in the economy, 39% are cautiously optimistic about the country’s economic state, and an additional 27% who are very optimistic, and 20% who say they are not optimistic at all about the economy.

Female empowerment is an important topic in Pakistan, which has traditionally been a male-dominated society. Increasing access to education is one way that development organizations hope to improve women’s opportunities in the country, and 45% of our male survey respondents agreed that improving access to education was the most important way to empower women. Interestingly, among females themselves, answers are more split, with 28% saying education, 23% increase in civic participation, and 23% stating a reduction in gender violence is the most important factor in empowering women. This demonstrates that while men generally believe education is the most critical factor in improving women’s opportunities, women themselves are equally focused on other issues they face.

Pakistan has a diverse media landscape that is classified “partly free” by Freedom House, with more journalists being threatened in the past decade than in earlier years. Internet penetration in the country remains quite low, and social media usage is estimated at around 18% of the population. GeoPoll found that 44% of those surveyed rated their social media usage at the lowest level, with just 19% saying classifying their usage of social media as “high”. Facebook is the most used social media channel, with 49% saying they use Facebook, compared to 14% using the next highest-used channel, YouTube. Newspapers remain the most popular overall source of information, followed by TV and Radio, demonstrating the dominance of traditional news outlets in the country.