The 2018-2019 Ebola epidemic in the Democratic Republic of Congo is the country’s largest outbreak of the disease. The number of cases has been consistently rising since April 2019, with WHO declaring the crisis a public health emergency in July 2019. As international aid organizations enact plans to slow the spread of Ebola in DRC and mitigate its long-term effects, GeoPoll is releasing the results of an SMS survey conducted with 483 people on-the-ground in the North Kivu province, including over 300 individuals in the city of Goma. SMS and other types of mobile-based surveys are useful in fast-moving situations such as disease outbreak, as they rely on the mobile connectivity of those already in affected areas.

The study was conducted from the 20th – 26th of August 2019 in Swahili and French, with respondents randomly selected from GeoPoll’s database of mobile subscribers in North Kivu. Out of 483 respondents, 313 were from Goma, with the remainder from other areas in North Kivu. The gender split was 58% male to 42% female, and the age breakdown was 45% 15-24, 43% 25-34, and 14% aged 35 and older. GeoPoll used our previous experience conducting surveys around Ebola and other disease outbreak to develop the questionnaire, the results of which can be seen below. Data provides a snapshot view of the on-the-ground situation and demonstrates the importance of further research in the region.

Awareness of Ebola in the DRC

A slightly smaller percentage were aware of the recent spread of Ebola in their own area, though still a strong majority of 79% reported that they knew of the outbreak. We do find some differences in the results by education level: those who had completed post-secondary school had higher levels of awareness of the outbreak, at 83% reporting awareness of Ebola, compared to 74% of those who had completed secondary school or lower levels of education. 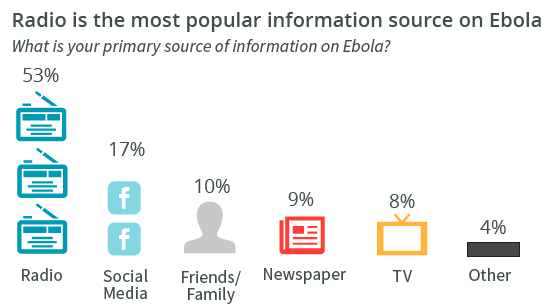 Health Actions and Perceptions of the Ebola Response

Aid organizations often focus on both treatment of Ebola and the distribution of information about the ways to prevent the spread of Ebola, and our survey asked several questions around the perception of the response to Ebola as well as perceived risk to disease exposure. In terms of aid presence, we found that 62% thought that healthcare or aid organizations had been more present in their area in the past two weeks. High levels reported fears about visiting health facilities for non-Ebola related illnesses, with 74% stating that people are scared to visit facilities for other health concerns. Additionally, public places are seen as the highest risk areas for exposure to Ebola, with 41% stating public transport poses the biggest risk to exposure and 39% stating general public places are the biggest risk. 86% report that they know how to prevent themselves from contracting Ebola, with no significant difference between genders. 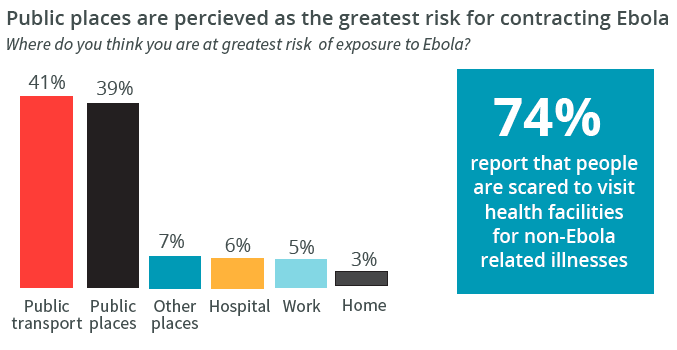 We also examined perceptions of the Ebola response, finding relatively high levels of support for the handling of the outbreak by both the government and hospitals. In terms of how the hospitals are handling the current outbreak, 65% report the hospital response is ‘average’ or higher, while 69% reported the same regarding the government. Only 15% and 14% reported that the hospitals and government respectively are doing an ‘excellent’ job at handling the outbreak, indicating there are still areas for improvement. We also found differing levels of confidence in the government’s ability to handle a larger outbreak: If there was a wider outbreak, 37% say they are ‘not confident’ in their government’s ability to handle it, while 35% say they are ‘very confident’. We did not observe differences between age and gender for the level of confidence in the government.

Much of the focus around Ebola in DRC recently has been centered on Goma, a border city with Rwanda, a transport hub for the region, and the capital of North Kivu. Due to concern around Ebola’s spread in this strategic location, we targeted this survey to ensure a high number of responses from Goma and asked several questions to the 313 respondents from the city.

Regarding treatment plans, we find that a high majority in Goma, 90%, would go to a health facility or hospital if they thought they had Ebola, rather than going to a private doctor or using traditional medicine. Further supporting the perceived value of hospitals to treat Ebola, we find that 93% say if someone in their household had symptoms they would go to a health facility quickly rather than treating them at home. Despite this, when asked specifically about Ebola Treatment Units, units specifically designed to treat and prevent the spread of Ebola, we found less knowledge of their uses. Just over half of Goma respondents said they were familiar with what happens at an ETU.

During high-profile disease outbreaks such as Ebola in DRC, there can be a level of concern over notifying officials of symptoms due to perceived stigma, however, we find that 84% in Goma would tell official Ebola response workers if they became infected with the disease. Despite high levels of worry over contracting Ebola, with 46% of respondents from Goma stating they are ‘very worried’ about becoming infected, we find a split response on people avoiding public spaces due to the disease: 48% have avoided areas like markets and stadiums, and 52% say they have not avoided public spaces.

Conducting Surveys in the Democratic Republic of Congo

To learn more about how GeoPoll’s mobile-based surveys and communications can be used to aid the Ebola response effort in DRC please contact us.