Using the daily data collected through GeoPoll’s Media Measurement Service, GeoPoll has analyzed the top TV stations in Tanzania for the first quarter of 2015, from January 1st – March 31st. We examined both ratings* and share** for the top stations in Tanzania. The below chart shows the average ratings for the top 5 channels during peak viewership, from 7:00pm to 9:30pm. 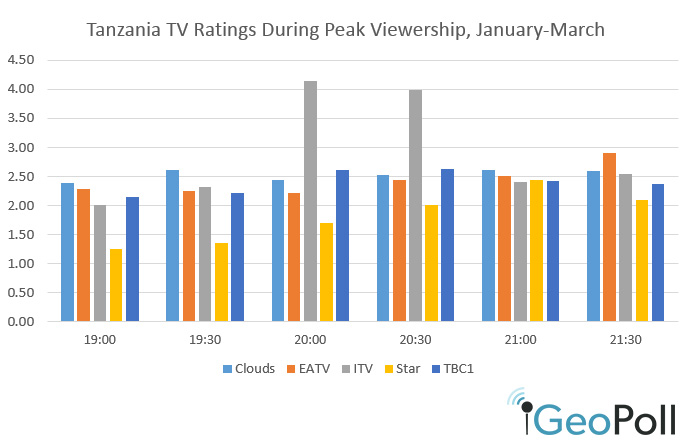 As displayed in this chart, the 5 most dominant TV stations, ITV, EATV, Clouds, Star, and TBC1, are fairly even in terms of ratings during prime time, with a few exceptions. This is in contrast to Uganda’s top TV stations, where just two stations, NTV and Bukkede, dominated the ratings during prime time.  From 7:00pm-8:00pm, ITV, EATV, and TBC1 show similar ratings on average. Clouds leads them slightly, with an average rating of 2.39 at 7:00pm and 2.6 at 7:30. Star lags behind, with an average rating from January-March of 1.26 at 7:00pm and 1.35 at 7:30pm.

GeoPoll also examined average share** over the entire period from January 1st – March 31st. GeoPoll found that on average, Clouds, EATV, TBC1, and ITV have a similar share of the total audience. Clouds has the highest share, with an average of 15.9%, and EATV has 15.2% of the total audience. Full results are below: 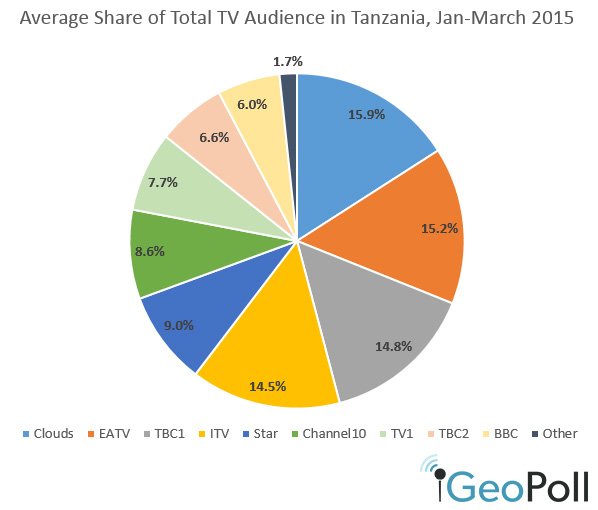 Top TV Stations In Tanzania, January-March
by average share from 6am to 10pm