Using the daily data collected through Kantar-GeoPoll Media Measurement, GeoPoll has analyzed the top radio stations in Uganda for the past three months from May 1st – July 31st. We examined both ratings* and share** for the top stations in Uganda. The below chart shows the average ratings for the top channels during the day from 06:00 to 22:00 (6am to 10pm). 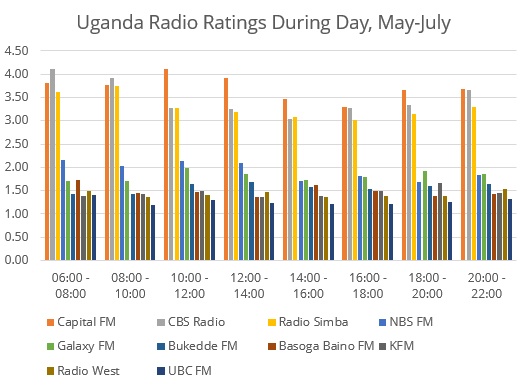 It is important to note the presence of a lot of stations in Uganda which are mostly regionalized. The net effect of this is that the listenership is fragmented and 44.6% of listeners are tuning into the “other” grouping of many smaller stations, which are not represented in the chart above.

CBS Radio FM, Capital FM and Radio Simba have higher listenership ratings throughout the day compared to the other stations. CBS Radio listeners appear to be tuned more in the morning period between 06:00 – 10:00. Capital FM gets slightly higher ratings between 10:00-12:00 when their show ‘AM to PM’ airs.

GeoPoll also examined average share over the entire period from May 1st – July 31st.  While 44.6% are listening to stations other than the top national stations listed here, GeoPoll found that Capital FM, CBS Radio and Radio Simba get the highest share with 9.6%, 9.0% and 8.5% respectively. We note an almost similar share between NBS FM, Galaxy FM and Bukkede FM, who all get between 4-5% of the audience share. 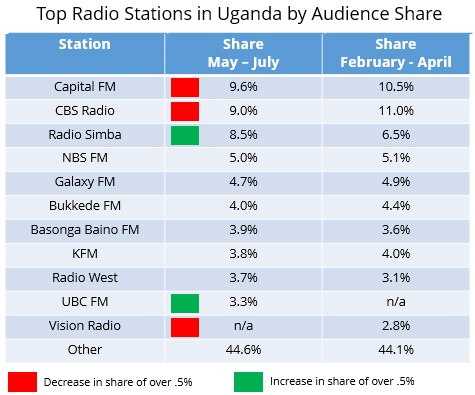 To view more data on audience size, ratings, and share of radio, TV, or print in Uganda contact us by clicking below.