Kantar-GeoPoll Media Measurement provides daily data on TV and Radio in 6 countries in Africa, and GeoPoll has analyzed the top radio stations in Nigeria for the past three months, from May 1st – July 31st. We examined both ratings* and share** for the top radio stations in the Nigerian states of Abia, Edo, Enugu, Federal Capital Territory (Abuja), Kaduna, Lagos, Oyo, and Rivers. 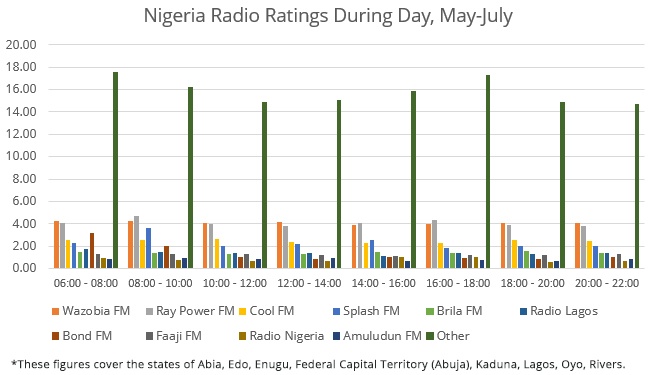 Nigeria boasts numerous radio stations that are organized by state and ultimately the high rating for “other” in the above chart points to fragmented listenership across these 8 states. Wazobia FM and Ray Power FM have higher listenership ratings throughout the day compared to the other stations. Bond FM listeners appear to be tuned more in the morning period between 06:00 – 08:00, and Splash FM gets higher ratings between 08:00-10:00.

GeoPoll also examined average share over the entire period from May 1st – July 31st as a way of ranking the top stations. GeoPoll found that Wazobia FM and Ray Power FM are the top stations in the 8 states studied, with a combined share of 24%. Wazobia FM and Ray Power FM are in close competition for listeners, with an average of 11.6% of the radio share each. Cool FM and Splash FM follow with 7.0% and 6.6% shares respectively. We also see Brila FM, Yes FM and Radio Lagos closely competing for share. 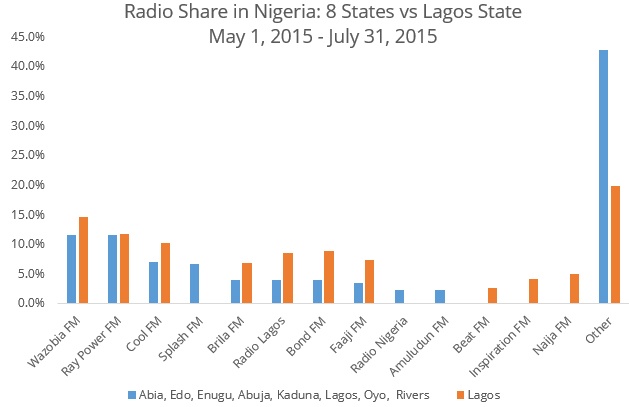 The rankings of top stations by share has stayed largely the same since our last study, which observed share from February to April 2015. During that time period, Ray Power had a slightly higher share than Wazobia, 13.2% to 11.6%, and Splash FM was ranked third with 6.8% share. Cool FM has increased in ratings since the February-April report, jumping from 5.45% share to 7.0% share.  You can see the full report from February – April 2015 here.

For more insights from Kantar-GeoPoll Media Measurement, keep checking the GeoPoll blog, or contact us to subscribe to our daily media data.
{{cta(‘0293b5b1-1898-4c0b-8e61-2807e80ea331’)}}
*Rating is the proportion watching/listening to a station out of the total sample at that time, multiplied by 100. If 50 people out of 500 surveyed watched Station X, the rating for Station X would be (50/500)*100) = 10. In Uganda, GeoPoll’s Media Measurement Panel includes a sample of over 500 respondents for every time period.