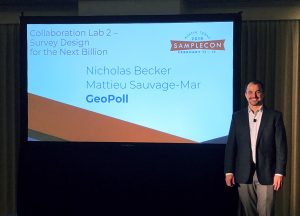 GeoPoll was excited to attend SampleCon this week in Austin, Texas. Focused on the survey sampling industry, SampleCon brought together experts from both sample providers such as GeoPoll and brands who require sample for their research projects. GeoPoll attended sessions that delved into some of the new trends in sampling and survey design, including automation, programmatic surveys, blockchain, and the future of panel building.

The need for reliable and engaged survey respondents around the globe was also discussed in several sessions, and GeoPoll was pleased to present on designing surveys for the next billion – individuals in emerging markets who represent a large percentage of the world’s population, and are of increasing interest to brands looking to build loyalty among a growing consumer class.

Due to their increasing spending power and the sheer size of the population throughout Africa, Asia, the Middle East and Latin America, emerging markets are the next frontier in market research. However, the majority of the market research industry has not had to think about the key differences in reaching respondents in these markets and sending them user-friendly surveys.

Recent data from Pew Research shows that internet connectivity in emerging markets such as South Africa, Nigeria, Mexico, and the Philippines is growing, buoyed by the level of smartphone adoption: in South Africa 60% own a smartphone, and an additional 33% have a mobile phone that is not a smartphone. This next generation of Internet users is coming online in a mobile-first society, used to accessing banking tools, sending messages, and playing games on a mobile phone, rather than a desktop computer.

This also means survey respondents in emerging markets will answer questions via their mobile device, and researchers must keep several important factors in mind when designing surveys for this population. For example, not all mobile browsers support JavaScript, which is used in some web link-based surveys, and long matrix questions may not show up correctly on devices with small screens. Photo and video questions can also present a challenge in areas with slow internet connectivity and expensive mobile data, as the survey respondent is charged for each photo they view.

Additionally, researchers must keep cultural context in mind when writing survey questions and understand that questions may be interpreted differently than intended – for example, GeoPoll has found that respondents asked the question “Do you work in market research?” often answer “yes” because they take surveys in exchange for a small incentive, when in fact the question is intended to identify professional researchers.

As brands and other groups begin to request more data from these markets, industry leaders must be educated on how to shift their mindset towards reaching basic mobile browsers, respondents that speak multiple dialects, and areas with poor mobile service. In our SampleCon presentation, GeoPoll went through best practices for survey design in emerging markets. To help the audience reach a better understanding of the overall importance that user experience can have on survey completion, GeoPoll presented a video that shows the lengthy and tedious process that a respondent must go through to complete a survey when it is not coded with their device type in mind. As market research continues to grow in countries outside North America and Europe the topic of user experience on basic mobile devices will become more and more prevalent so the video showcasing negative user experience is included below.

If you’re interested in learning more about how to design surveys for respondents in Africa, Asia, and Latin America, download our free guide to conducting research in emerging markets here. For more information on GeoPoll’s respondent panel and multi-modal mobile survey platform, contact us anytime.