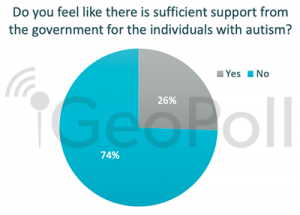 Autism Spectrum Disorder (ASD) is a neurodevelopmental disorder that affects an individual’s ability to interact with others, communicate and display or repetitive behaviours or interests.  Since autism is a spectrum disorder, this means that individuals with the same diagnosis may have very varied abilities and difficulties. The Centre for Disease Control (CDC, 2014) estimates a prevalence rate of about 1 child in 59 as having a diagnosis of ASD in the US. There are no current prevalence rates of ASD in Kenya, however an increase has been seen over time. This could be as a result of more cases of autism, or of better awareness on the disorder.

In 2014, Pooja Panesar from Kaizora Institute conducted some research on the perception and understanding of various disabilities among Kenyans. A correlation on the educational background and level of exposure to the perception of various disabilities was found whereby individuals from the rural areas with less educational access have a higher perception of disabilities as a result of witchcraft or being cursed. They seek out treatment in the form of prayers and traditional healers among others. In the cities, there is a better understand of autism being a disability for which a medical doctor should be consulted with followed by various interventions. There is still a gap on awareness of evidence-based interventions for ASD. Based on the informal results obtained from this survey in 2014, GeoPoll and Kaizora put together a survey that helps to give a better idea on awareness of ASD in addition to the rate of diagnosis and where the diagnosis is being done (the validity of the diagnosis).

In order to fill the gap on prevalence and understanding of ASD, GeoPoll and Kaizora Institute collaborated to run a survey with 1354 respondents. While full conclusions cannot be drawn from the scope of this study, results show an initial view of autism in the country. Respondents were age 18-35, with 48% in the 18-25 age range and 52% in the 26-35 age range, 50% male and 50% female. In terms of location, 52% of respondents were from a rural area and 48% from an urban area. Respondents came from 45 of Kenya’s 47 counties.

There is no blood test or other straight forward blood test that can diagnose autism. A diagnosis requires in-depth observations of the child along with parent questionnaires by a team of qualified professionals. Red flags for autism can be seen in a child as young as 9 months and autism can be diagnosed as young as 18 months of age. Early detection is imperative as it leads to early intervention which has been shown to improve symptoms significantly.

Challenges for those with autism 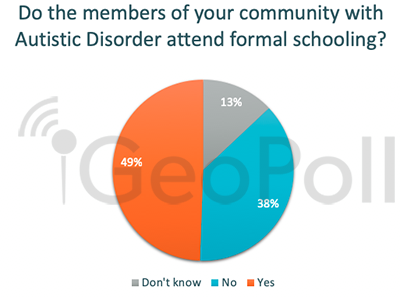 The lack of data on autism in Kenya and many other countries can prevent funding for financial assistance, specially-designed educational programs, and awareness campaigns. Initial data from this study shows the need for more research on autism in Kenya so that more inclusive programs for those with autism can be developed over time.