GeoPoll’s Media Measurement Service produces daily ratings and audience size for TV, radio, and print in Kenya, Ghana, Uganda, and Tanzania, so we have been closely following news around the switchover from analogue to digital television transmission in Kenya. This transition, which has already started to occur in the capital city of Nairobi, will mean that by June 2015 all households in Kenya will need a set-top-box to access television stations. Currently, many people in Kenya access TV stations through free-to-air analogue signals, which do not require additional equipment to receive.

Digital signals have several benefits to analogue: digital signals provide clearer pictures and sound, a wider selection of channels, and use less bandwidth to transit, which will enable Kenya to use more bandwidth for other services. However, the required set-top boxes are expensive, an average of around 5,000 Kenya shillings, or about $55. To assess the knowledge and perceptions of the switchover, GeoPoll conducted a mobile survey with 400 Kenyans from across the country on January 12, 2014. This sample equals a margin of error of 4.9% at the 95% confidence level. 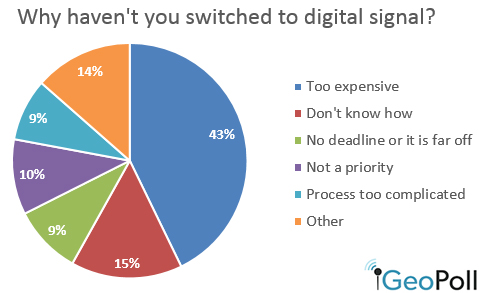 Finally, we asked respondents who had not yet made the switch what factors were impacting their switch, finding that the high expense was the most popular response (43%), followed by “don’t know how” (15%). Examining when these respondents were planning to switch from analogue to digital, we found that 29% plan to switch in the next month, and 21% plan to switch in the next two to three months, in line with the government’s deadline of June 2015. However, 18% said they will wait a year to switch, and 14% indicated they would never switch, demonstrating some resistance to the change.