In February 2015, Kenya TV transmission underwent a transition from analogue to digital signal, a move that required TV owners to acquire a set top box to continue to receive television signal.

GeoPoll has followed the trend closely since January 2015, when we conducted an initial survey that indicated that less than half of TV owners had access to digital signal.  This percentage increased throughout 2015, and by July 2015 we found that 63% of those with TVs owned a set top box and were able to access digital signal.

The study also indicated an increase in the number of people paying a monthly fee to access services from 62% in March 2015 to 70% in December 2015.

The digital migration increased the number of channels available from the analogue platform. Surfing for new channels has dropped from a high of 67% in March 2015.  In December, 55% of respondents indicated that they are still exploring new channels.

In December, 45% of those who have not yet switched to digital indicated they had not made the switch because it was too expensive. This percentage has declined since March, possibly due to increasingly affordable set top boxes: in March 58% said they hadn’t switched over because set top boxes were too expensive. 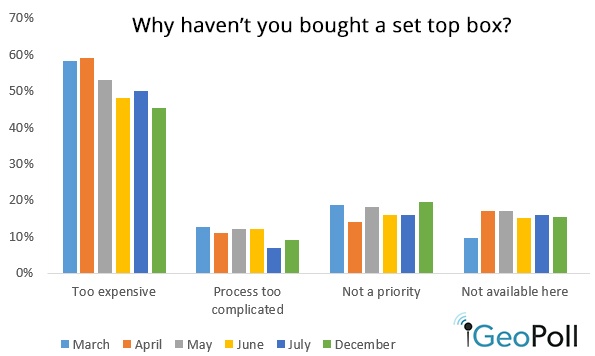 If you are interested in the full data set, which includes set top box penetration broken down by region, data on popular channels, and more, please click below to contact us.