Ghana Tunes in for Close African Cup of Nations Final

For the past month, African football teams have been playing in the African Cup of Nations, the equivalent of the World Cup for the African continent. The final game was Sunday February 8th, between Ghana and Cote D’Ivoire. It was a dramatic match, with Cote D’Ivoire winning 9-8 in a penalty shootout following a scoreless game. Through GeoPoll’s Media Measurement Service we examined the viewership numbers for the final match, finding that nearly 3.7 million Ghanaians tuned into the event.

Viewership was also high for the semi-final match on February 5th, when Ghana beat host nation Equatorial Guinea 3-0, and fan riots stopped the match for 40 minutes with only 10 minutes to go. During that game, viewership peaked at 3,093,000 at 7pm. Interestingly in the Greater Accra Area, viewership went down from 8pm – 8:30pm, and then up again at 9pm, which may indicate viewers in Accra heard about the riots and tuned back in to see what was going on. At 9pm on February 5th, there were 725,000 viewers in Greater Accra watching the match. 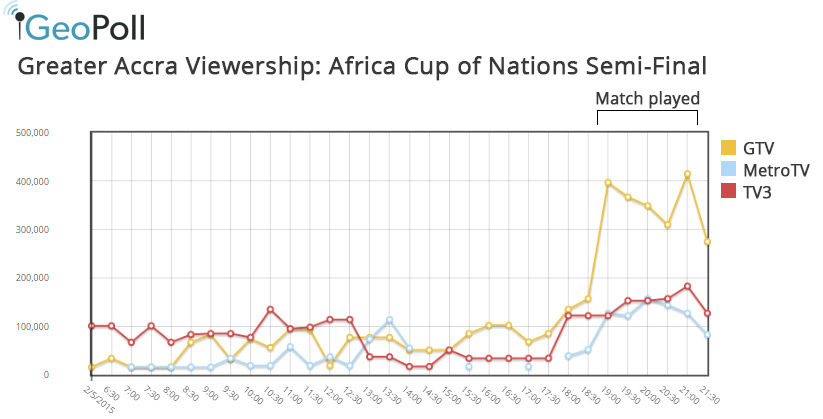 Learn more about GeoPoll’s Media Measurement Service here, and click below to get a demo of our platform and data in Ghana, Kenya, Tanzania, Uganda, Mozambique, and Nigeria.

World Cup 2018: Over 29% of TV watching audiences from 5 African Countries watch the Nigeria Vs. Argentina match