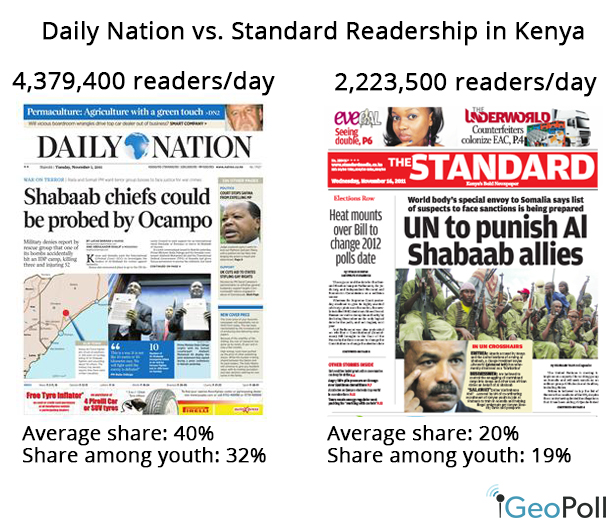 GeoPoll’s Media Measurement Service now includes daily measurement for print outlets, and we’re excited to share some of our findings on Kenya’s print media. GeoPoll measures newspaper and magazine audience size and share daily, and data can be filtered by demographics including age, sex, and location.

When we examine share by different age groups and genders, we see a more diverse picture of newspaper readership. Interestingly, young people (ages 15-24) are less devoted to Daily Nation and Standard; while these two newspapers still have the most share, 32% and 19% respectively, they also read other newspapers including Taifa Leo, with a 12% share, sports publication Mwanaspoti, 10% share, and The Nairobian, part of the Standard Group, 10% share.

Gender also has an effect on readership: men of all ages read Mwanaspoti more than women, and while The Nairobian has a 10% share with women, it only has a 6% share with men. Citizen also has a higher share with women than men, 8% to 5% respectively. Among the different provinces of Kenya there is also a slight difference in readership: in Central province the Daily Nation has an even bigger lead over The Standard: they hold 45% share compared to only 14% for Standard.

On the magazine side, we find that Parents and True love are consistently the most read magazines: Parents had an average readership of 1,844,500 daily over the past 30 days, and True Love had a readership of 1,986,500 daily. On the weekends, Saturday Magazine jumps up in readership, bringing in over 2 million readers, and up to 2,255,000 on weekends after it has been published.

Stay tuned for more updates from our print measurement service, and click below to subscribe to GeoPoll’s Media Measurement Service.