The match between Nigeria and Argentina on Tuesday 26th June was watched by an average of over 29% of all TV watching audiences in the six African countries where GeoPoll collects daily audience measurement data. The match which was the final one for both teams was the most anticipated as both teams desperately needed to win. Nigeria lost to Argentina 2:1 in group stage dashing their hopes of taking the glory.

Over 12% of all TV viewers from 12 of the 36 states in Nigeria tuned in with a palpable hope for their homegrown heroes. The Super Eagles were once again confronting their all-time rivals Argentina. For the Nigeria viewers, Super Sport was the channel of choice. The DSTV channel had the largest share of TV viewers at 6.6% followed by Nigerian Television Authority (NTA) at 5.7%.

In Kenya, over 40% of all TV viewing audiences were glued to this match with NTV and Kwese having the highest channel share at 18% and 15% respectively.

In Uganda, 22% of all TV audiences tuned in with UBC having the highest TV ratings among other World Cup channels at 8%. Rwanda’s viewership of the match was at 55% with Rwanda TV taking Lion’s share. Finally, in Tanzania, 23% switched from watching other channels with a majority preferring TBC1 at 16% channel share to watch that final match for Nigeria.

Most Watched Nigeria Game in the World Cup 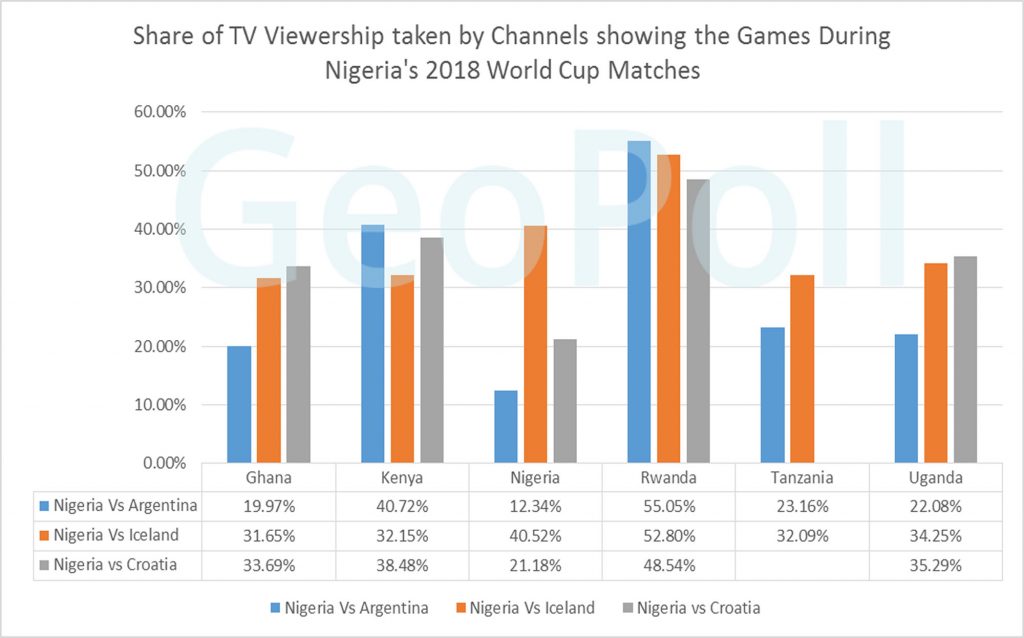 Out of the three matches in which Nigeria faced Croatia, Iceland, and Argentina in the group stage, the most watched match across the six countries was when they played Iceland.

An average of 35% of all TV viewers watching this match in which Nigeria beat Iceland 2:0.  That match was also the most watched by Nigerians in 12 out of the 36 states in which GeoPoll’s audience measurement service runs. In Nigeria, over 40% of all TV viewing audiences watched the match with Supersport having the highest share of channel at 35%

With the elimination of Nigeria, Morocco, and Egypt at the group stage, the only remaining African teams that will be playing later today (29th June) are Senegal and Tunisia.

In this last day of the group matches, Senegal has emerged as the continents underdogs. Tonight they will be facing Colombia as Tunisia meet Panama in the last group matches.

GeoPoll has been and continues to collect media audience measurement data throughout the World Cup in Kenya, Ghana, Tanzania, Nigeria, Uganda, and Rwanda. Contact us now to get these deeper insights into the World Cup viewership in Africa or to sign up for our exclusive World Cup offer!