GeoPoll had a busy 2018, from opening new CATI call centers to expanding GeoPoll Audience Measurement into additional countries in Africa and the Caribbean, and launching new services such as mobile-based Market Research Online Communities. We have also produced multiple in-depth reports on everything from World Cup viewership to holiday spending habits, and have shared them here on the GeoPoll blog. As 2018 comes to a close and we look forward to new projects and launches in 2019, we would like to highlight some of our top moments from the last year. 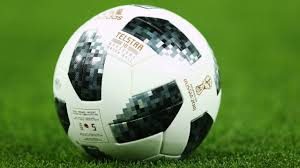 GeoPoll has closely followed the World Cup and other major sporting events through GeoPoll Audience Measurement data since 2014, when we launched our media product prior to the World Cup in Brazil. This year, we were pleased to release two full reports on World Cup interest in Africa and activities surrounding the World Cup such as betting, as well as regular blog posts on individual game and round viewership. Get the reports here:

GeoPoll works regularly in the food security and agriculture sector, and in 2018 we conducted surveys in two areas which have been plagued with violence and food insecurity: South Sudan and the Democratic Republic of Congo’s Ituri province. GeoPoll’s SMS survey in Ituri province found that 60% of residents are displaced, and 64% reported not having enough food to feed their family in the next week. GeoPoll also deployed Computer Assisted Telephone Interviewing (CATI) surveys in South Sudan, which found that almost half of respondents thought 80% or more of their community was struggling with food insecurity, with high prices contributing to the lack of food availability.

Guide: How to Conduct Research in Emerging Markets 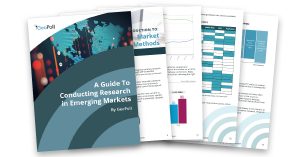 GeoPoll has been conducting research in Africa, Latin America, the Middle East, and Asia since 2012, and this year we put together a guide which includes many of our lessons learned. Identifying and recruiting a representative sample, conducting background research, and writing and administering surveys in emerging markets can be a challenge due to low rates of internet and landline penetration, cultural context and language differences, and more. In this guide GeoPoll walks through the considerations researchers need to make when embarking on a research project in an emerging market. Download the in-depth guide on how to conduct research in emerging markets here.

Data on Farmers in Kenya 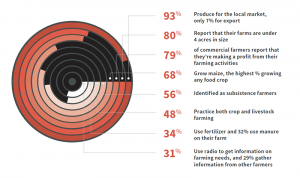 In the second half of 2018, GeoPoll recruited a panel of farmers throughout Kenya who are available to take our mobile-based surveys. We also conducted a detailed study on the habits of this segment of the Kenyan farming population, and released data on land size and ownership, type of crops and livestock farmed, and usage of mobile phones and apps such as mobile money, chat groups, and other mFarming apps. This report also examines the challenges faced by farmers in Kenya, including changing climate and inconsistent prices, and looks ahead to the latest trends in agriculture, as predicted by farmers themselves. Download the report on farming in Kenya here.

GeoPoll looks forward to sharing more data insights, best practices, and guides with you in 2019. To conduct your own research using GeoPoll’s panel of respondents and multi-modal survey platform, contact us here.