In partnership with Ipsos and the Congo Research Group at New York University, in late December 2018 GeoPoll conducted surveys around the Democratic Republic of Congo elections which occurred on December 30th. GeoPoll and Ipsos reached 902 Congolese respondents through the mobile phone and administered a survey that examined the popular opinion of the candidates, the potential for violence and unrest following elections, and the likelihood for each candidate to win in a free and fair election. 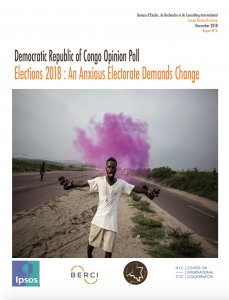 The same questionnaire was administered to different respondents by research firm Bureau d’études, de Recherches, et de Consulting International at the same time, and results were compared. Findings demonstrated that both firms reached the same general conclusions, with some differences, mostly based on differing education levels in each sample.

Major findings included that the potential for violence following elections is extremely high, with 48% saying they would “most certainly and/or probably” protest against rigged elections. Over 50% do not trust courts to fairly resolve electoral disputes. Data also found there is a highly engaged electorate in the DRC, with over 90% saying they intended to vote in the election. According to the survey, opposition candidate Martin Fayulu was the favorite candidate.

Full results are available in the report produced by NYU’s Congo Research Group, which is available for download here.