To understand how brands’ reactions to the world around them influence consumer behaviors and perceptions, GeoPoll conducted a study in July 2021 in South Africa using our mobile web platform. The study addressed three primary research topics:

The survey gathered feedback from approximately 700 respondents with a gender composition of 61% females and 39% males, an age breakdown of 27% ages 15-25, 33% ages 26-35, and 39% ages 36 and over, and representation from all nine provinces in South Africa.

GeoPoll produced an initial summary of the research findings along with an interactive dashboard of the research data in early August. In this supplemental summary, we detail consumers’ responses to the five open-ended survey questions listed below:

The social and economic disruption caused by the coronavirus pandemic has impacted how consumers across the globe interact with brands. According to a McKinsey study, 79% of consumers in South Africa have changed stores, brands, or the way they shop due to the pandemic. In our study, most respondents (64%) say how brands reacted to COVID-19 in their advertising influenced which products or brands they purchased.

South Africa has suffered the highest number of confirmed cases and deaths from COVID-19 in Africa. With limited access to the vaccine, many are forced to rely on public health measures to slow the spread of the disease. And they appreciate brands using their advertising spend to promote public health. 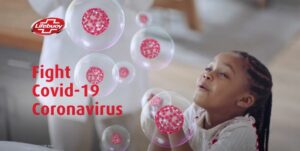 When asked which brands responded well to COVID-19 in their advertising, the top two brands mentioned by far, Lifebuoy and Dettol, produced ads informing consumers how to use their soap, sanitizer, and disinfectant products to lessen the spread of coronavirus. 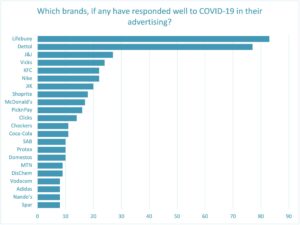 Johnson & Johnson, the US pharmaceutical company that is providing and manufacturing its COVID-19 vaccine in South Africa also produced ads that resonated with many respondents, as did Vicks, which offers products used to alleviate the symptoms of respiratory illnesses. 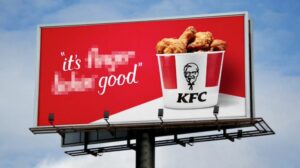 Taking a completely different approach, KFC decided to keep its ads light-hearted and entertaining, temporarily blurring out part of the brands well-known slogan, Finger Lickin’ Good, for the sake of public health.

Whether sharing helpful COVID-19 information, promoting COVID-related products and vaccination, or just providing some much-needed comic relief, consumers do not want brands to shy away from the pandemic. In our study, practically no one believed brands should ignore COVID-19 in their ads (3%) or stop advertising completely (4%).

Consumers had a more difficult time citing brands that responded poorly to COVID-19 in their advertising rather than positively. Approximately 2 out of 3 respondents were not able to list a single brand. 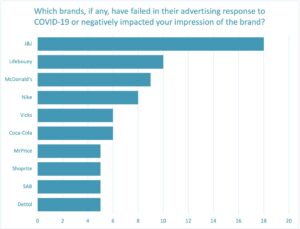 The tumultuous rollout of the Johnson & Johnson vaccine in South Africa apparently caused negative perceptions for some consumers. After the vaccine was administered to healthcare workers in February, and conditionally approved by the South African Health Products Regulatory Authority in April, the company was forced to halt production and destroy more than two million doses due to contamination in a manufacturing plant in the US. Johnson & Johnson’s advertising was not able to overcome all that negative press for some respondents in this study.

While Lifebuoy’s COVID-19 ads received more positive feedback than any other brand, a relatively small number of respondents had negative reactions. Either way, Lifebuoy’s ads have been clearly noticed by many.

Major international brands McDonald’s, Nike, and Coca-Cola also produced ads that generated mixed reactions. Applying the industry adage that “bad press is better than no press,” all three companies are likely at least somewhat pleased with the recognition of their campaigns.

The Importance of Diversity and Inclusivity in Advertising

Diverse and inclusive advertising portrays people from all backgrounds, regardless of race, ethnicity, gender identity, age, religion, ability, sexual orientation, or otherwise. It portrays people from marginalized communities previously excluded from most ads. In our study, approximately half of respondents (49%) consider it “very important” for brands to portray diversity and inclusivity in their advertising. That number jumps to 62% for respondents ages 15-25, demonstrating heightened social consciousness in the younger demographic. 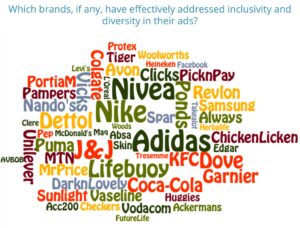 Several brands stand out for specifically and effectively addressing inclusivity and diversity in their advertising:

Respondents claim to be inspired by diverse and inclusive advertising. Most in our study (66%) said they were inspired to take some kind of action after seeing an ad they considered to be diverse or inclusive. Almost half (46%) “bought or considered buying the product or service” advertised.

The Impact of Influencer Marketing

An influencer is an individual who has created an audience or fan base that they are able to influence via online channels, such as social media, blogs, podcasts, etc. In many cases, influencers profit through promoting products to their audiences, a strategy known as influencer marketing, which has now become a multi-billion dollar industry. 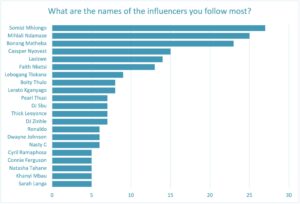 On the other hand, many consumers express more interest in following someone whose life seems more real and attainable than a celebrity’s. Although most of the hundreds of different influencers mentioned by respondents are regular social media users (with relatively small followings), some have built up substantial followings to become social media sensations. Some of the most frequently mentioned include, Mihladi Ndamase, Faith Nketsi, Lebogang Tlokana – commonly known as “The Funny Chef,” and Thick Leeyonce.

Many businesses are now engaging online influencers to push products and improve brand awareness among their target audiences – especially young consumers. In our study, most younger respondents (65%) said they have purchased a product based on an influencer’s recommendation, compared to 47% of older respondents. Even a 47% purchase rate, however, illustrates the powerful impact influencers have in promoting brands and driving real results.

The brands and products respondents claim they were influenced to buy cover the gamut, from apparel companies, to technology companies, to soap companies. 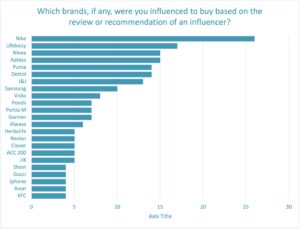 International apparel brand, Nike, has been at the forefront of embracing influencer marketing. In addition to producing campaigns with A-list celebrities and athletes (Ronaldo, Serena Williams, Colin Kaepernick, etc.), Nike also partners with youth influencers and social media sensations, allowing them to evaluate Nike products on their own terms. Other popular apparel brands, such as Adidas and Puma, implement similar strategies.

In a time of crisis, many influencers are using their elevated status for social good. In our study, 73% of respondents in South Africa say the influencers they follow have “promoted social distancing, good hygiene, mask-wearing, etc.” That is reflected in the number of health and hygiene brands respondents say they have been influenced to buy, including Lifebuoy, Dettol, Johnson & Johnson, Vicks, ACC 200, JIK, etc. 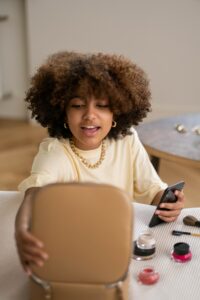 Influencers have proven extremely effective in promoting beauty brands. Consumers want to see real people using and evaluating a beauty product rather than hearing a sales pitch. More than half the respondents in our study consider “pictures of the influencers using the product,” “live videos explaining the product or unboxing,” and “product reviews” from the influencer to be highly influential content. They report being influenced to buy a range of beauty products, including Nivea, Ponds, Portia M, Garnier, Herbalife, Revlon, and more.

To dive deeper into GeoPoll’s data on how brands’ reactions to the world around them influence consumer behaviors and perceptions in South Africa, click here to access the dashboard. The dashboard allows you to view all the data from this study, filterable by country, age group, gender, and question.

To request more information about this study or get a quote for an upcoming project of your own, please contact us.