The social and economic disruption of the past year has impacted how consumers across the globe interact with brands. In South Africa, record-high unemployment rates and reduced incomes mean consumers have less money to spend and are therefore more discerning about how they spend it.

Evolving social norms are also altering what consumers expect from brands. Rather than churning out the same brand-centric advertisements year after year, consumers expect companies to be in tune with what is happening globally – and are quick to make changes if they are not. According to a McKinsey study, 79% of consumers in South Africa have changed stores, brands, or the way they shop due to the pandemic. To stay relevant, brands have to consider, adapt and respond to a rapidly changing world and marketplace.

To understand how brands’ reactions to the world around them influence consumer behaviors and perceptions, GeoPoll conducted a study in early July 2021 in South Africa using our mobile web platform. In this initial report, we present some of the highlights from that survey.

Consumers admit to being influenced by advertising. More than 68% of both men and women in this study say they purchased something based on ads in the past few months. Younger respondents (ages 15-25) claim to be less influenced by ads (61%) than the older age groups.

Social media (68%) and TV (64%) stand out as by far the most noticed and influential ad channels across genders and age groups. 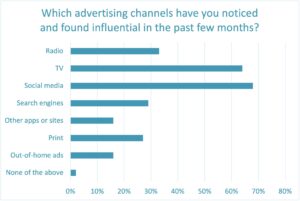 Consumers also admit to paying attention to what brands are saying in their ads. South Africa has suffered the highest number of confirmed cases and deaths from COVID-19 in Africa, and the crisis is far from over. Most respondents (64%) say how brands reacted to COVID-19 in their advertising influenced which products or brands they purchased. Respondents under age 36 report being far more influenced than those ages 36 and over (71% to 52%, respectively). 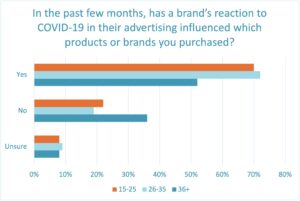 Ideally, consumers want brands to use their advertising dollars for good. Rather than promoting their products in a time of crisis, 71% of respondents say they would like brands to “share helpful COVID information” in their ads. Others would like to see brands put out ads “promoting COVID vaccination” (54%) or “showing the brand helping others or the community” (52%). 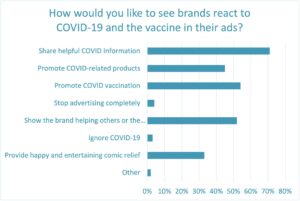 Practically no one believes brands should ignore COVID-19 in their ads (3%) or stop advertising completely (4%).

The Importance of Diversity and Inclusivity in Advertising

Diverse and inclusive advertising portrays people from all backgrounds, regardless of race, ethnicity, gender identity, age, religion, ability, sexual orientation, or otherwise. In our study, approximately half of respondents (49%) consider it “very important” for brands to portray diversity and inclusivity in their advertising. That number jumps to 62% for respondents ages 15-25, demonstrating a heightened social consciousness in the younger demographic. 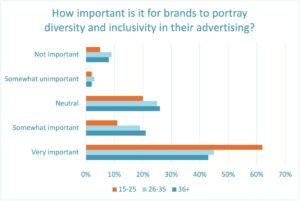 The age disparity is especially prominent amongst women, with 69% of women ages 15-25 considering diversity and inclusivity in advertising very important, compared to only 46% of women ages 26-35 and 41% of women ages 36 and over.

Respondents also claim to be inspired by diverse and inclusive advertising. Most (66%) say they were inspired to take some kind of action after seeing an ad they considered to be diverse or inclusive. Both young men (83%) and young women (75%) were more likely to be inspired than older respondents, suggesting that building an inclusive brand will become more and more important in the future. 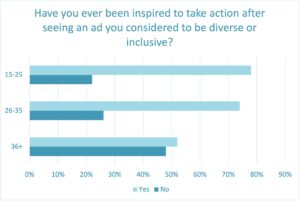 The survey asked respondents to select which, if any, of the following 14 categories they believe it is important for brands to be conscious of in their advertising: gender identity, gender equality, age, body type, race/ethnicity, culture, sexual orientation, skin tone, language, religious/spiritual affiliation, physical ability, disabilities, socio-economic status/income, and overall appearance. 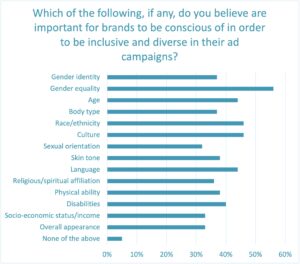 At least a third of respondents selected each of the 14 categories as important. More than half (56%) believe it is important for brands to be conscious of “gender equality” in their advertising.

The Impact of Influencer Marketing

The shift to a global digital marketplace began more than a decade ago, but the coronavirus pandemic has accelerated that transition. With digital interest and behavior on the rise, brands are experimenting with new ways to engage their customers. Specifically, an increase in online shopping and significant growth in the adoption of social media platforms has led many brands to prioritize influencer marketing campaigns.

An influencer is an individual who has created an audience or fan base that they are able to influence via online channels, such as social media, blogs, podcasts, etc. In many cases, influencers profit through promoting products to their audiences, which has now become a multi-billion dollar industry.

Influencer marketing is essentially a digital form of word-of-mouth marketing. According to Nielsen, 92% of 18-to-34 year-olds say they seek recommendations from friends and family when considering a product purchase – making word-of-mouth the highest ranked source for trustworthiness for younger consumers. 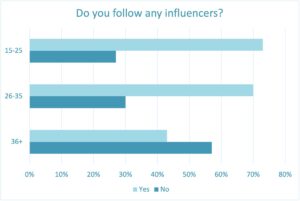 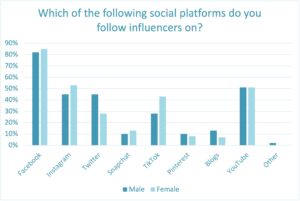 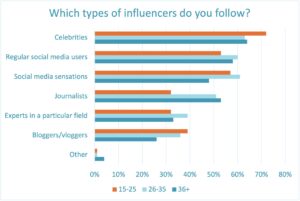 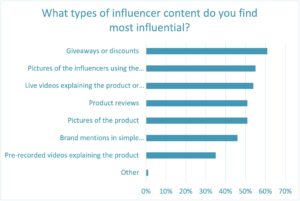 Consumers often trust people more than brands. They want to see people using and evaluating a product rather than hearing a sales pitch. More than half of respondents consider “pictures of the influencers using the product,” “live videos explaining the product or unboxing,” and “product reviews” from the influencer to be highly influential content. Many businesses are now engaging online influencers to push products and improve brand awareness among their target audiences – especially young consumers. It is important to remember, however, that influencers can bring both positive and negative attention to a brand. Approximately a third of respondents in this study say the behaviors of an influencer have caused them to have negative impressions of a brand. Men are much more likely to be impacted, with 44% developing negative impressions compared to 24% of females. That number jumps to 52% for men ages 26-35. Clearly, brands must spend considerable time and effort identifying influencers that connect with the brand’s core values and act accordingly.

According to respondents, the influencers they follow have primarily acted responsibly and positively throughout the pandemic. With delayed vaccine rollouts, many in South Africa have had to rely on public health measures to slow the spread of the virus. In support of those efforts, 73% of respondents say the influencers they follow have “promoted social distancing, good hygiene, mask-wearing, etc.” Another 62% say influencers have used their platform to “promote COVID-19 testing and vaccination” and 53% say influencers have “promoted/donated to charities and social causes.” 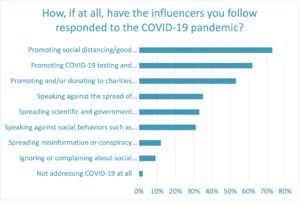 Far fewer, but still a substantial number of respondents report influencers reacting to the pandemic in negative ways, including “spreading misinformation or conspiracy theories” (12%) or “ignoring or complaining about social distancing and government restrictions” (9%).

Consumers are more aware and discerning than ever before about how brands react to the world. As observed in this study, consumers in South Africa notice how brands respond to crisis, the values they espouse, and the types of people they choose to represent them – and they make purchasing decisions based on that information. To stay relevant, particularly with younger consumers, brands must not only say the right things but act accordingly. They need to keep their fingers on the pulse of society so they are ready to adapt and respond to a rapidly changing world, worldview, and marketplace.

Dive deeper into GeoPoll’s data on how brands’ reactions to the world around them influence consumer behaviors and perceptions in South Africa using the dashboard below. Here, you can view all pieces of data from this study, filterable by Province, age group, gender, and question:

This GeoPoll survey was conducted using GeoPoll’s mobile web platform in early July 2021 in South Africa, surveying approximately 700 respondents. It is not purely a scientific study as there were no strict measures to limit demographic quotas. A good mix was achieved, however, with a gender composition of 61% females and 39% males, and an age breakdown of 27% ages 15-25, 33% ages 26-35, and 39% ages 36 and over. Respondents from all nine provinces in South Africa were included in the study.

To request more information about this study or get a quote for an upcoming project of your own, please contact us.

Influencer Marketing in Kenya and Nigeria