Advertising has come a long way, but the objective has remained the same – reach an audience and appeal to it to procure a product or service. What has evolved continuously are the audience’s tastes and preferences and the mediums through which brands and organizations can reach them.

To shed more light on consumers’ tastes and the channels they can be reached through, GeoPoll ran a Rapid App survey in Ghana, Kenya, Nigeria, South Africa, Tanzania, and Uganda between the 10th and 15th of December 2020, with a sample size of 999. This report summarizes the findings on topics such as the most popular media channels, media consumption changes, trust in advertisements, the prevalence of online channels, and the most effective types of advertisements.

Most popular media channels in Africa

GeoPoll’s study found that the internet (social media and other websites) and TV are the most consumed media channels by respondents in this study. Fifty-five percent of the respondents said they access online media channels every day. In contrast, 23% said they watch TV daily. Sixteen percent said radio was their go-to channel, and only 5% said they read newspapers and print media every day. This differed from country to country and between genders. For example, females in Ghana said they prefer TV (45%) over social media (20%), compared to males (24% for TV and 39% for social media). In Tanzania, on the other hand, females preferred social media (56%) over TV (just 4%) while males were relatively even with 33% picking social media over TV (26%). 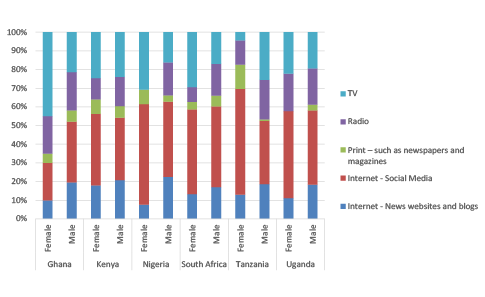 To gauge how media preferences are changing, we examined how much more or less of each channel the respondents were consuming in the last 12 months, compared to the previous year. A large majority (72%) reported that they are using social media more than they did a year ago. TV also had an upsurge in viewership, as discovered in recent GeoPoll Audience Measurement reports, with 54% saying they are watching more television, which was in direct contrast to print, which over half of the respondents (54%) said they are reading less of compared to last year.

The influence of a media channel depends, to a great extent, on if its audience can trust it, especially so for advertising. In the survey, we asked the respondents which media channel they trusted advertisements on the most. TV was cited as the most trusted by almost half of the respondents (46%). The internet and radio followed with 30% and 12% trust levels, respectively. 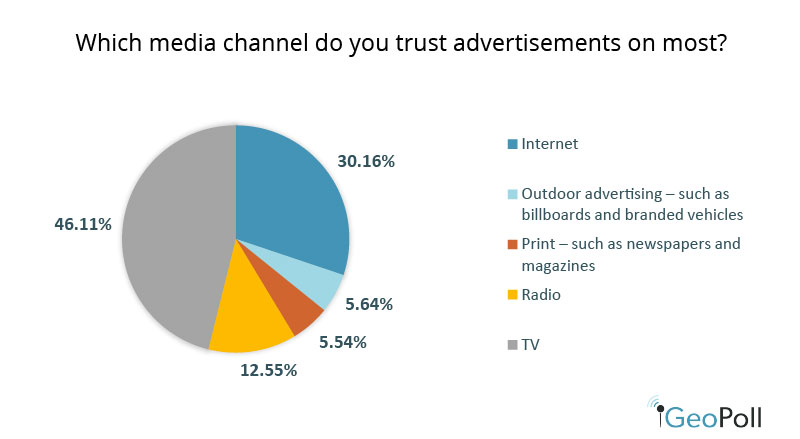 Overall, asked about which of traditional channels or modern channels they find more trustworthy, the respondents were split almost evenly, with 43% trusting online advertising over traditional media (41%). Seventeen percent said both are about the same. 85% of the respondents have purchased a product or service after coming across an advertisement. 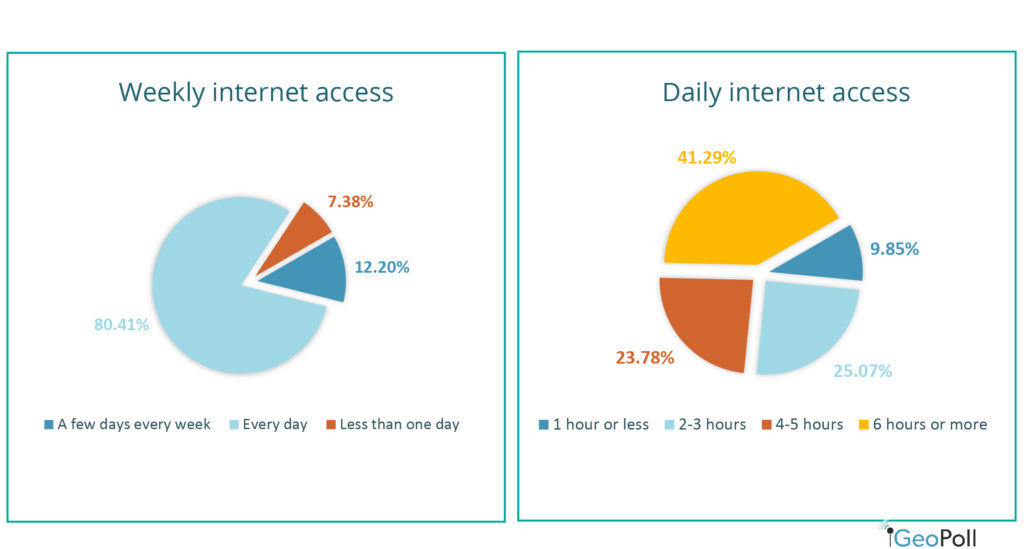 Having established the popularity of online channels over other channels, the next question becomes which specific online channel is most popular. As we have found out in other surveys we have conducted across Africa, Facebook was the most popular in all the countries we surveyed, by a big margin, with 45% choosing Facebook as the favorite channel. Overall, YouTube was second with 15%, followed by Twitter at 14%. However, the order varies when we look at the findings by country.

SUGGESTED  GeoPoll's Mobile Survey Modes and How Each Works 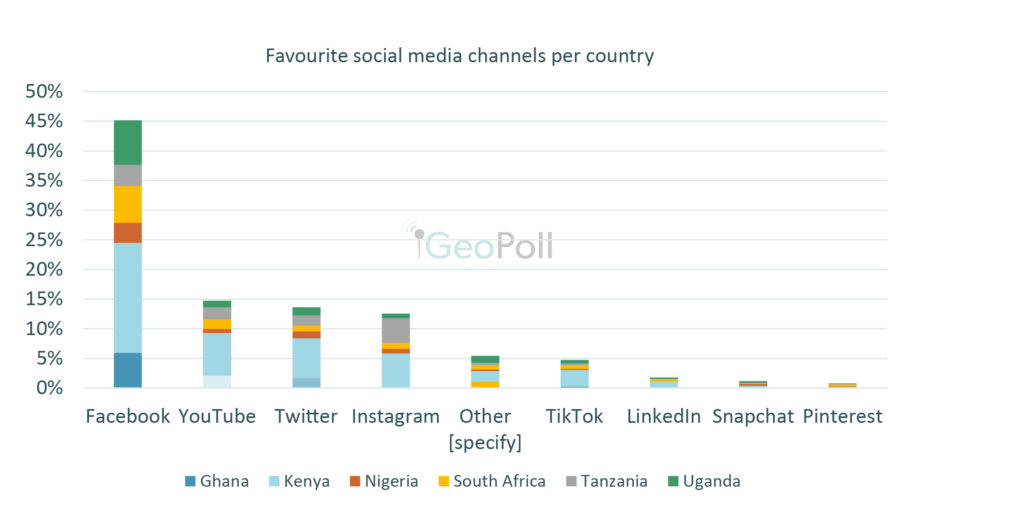 The Most Effective Advertisements

Many factors go into an advertisement. Channel selection, which we have already looked at, is as important as the message, the design, and the target audience, among other factors. The GeoPoll survey also sought to know what ad elements are most influential from a selection we provided. The offer (price) was the most crucial element (28%), followed by relevance to the person seeing the advert (24%) and access (convenient availability of the product, at 19%). So, it is essential to pay attention to the price and discount being offered, audience targeting options, and how the product will reach the buyers if you are an advertiser.

Finally, the survey sought to establish the type of adverts that customers find most enjoyable; hence the advertisements advertisers need to create most. In a society that craves reality, lifestyle images and videos of real people such as influencers were the most popular, as well as creatively designed banners. 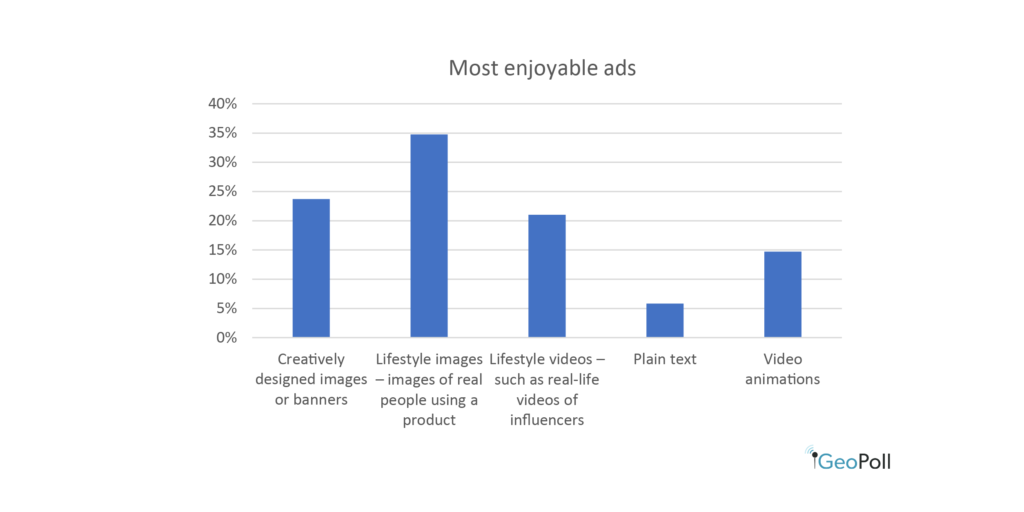 About this GeoPoll Survey

This Rapid Survey was run via the GeoPoll mobile application between the 10th and 15th of December 2020 in Ghana, Kenya, Nigeria, South Africa, Tanzania, and Uganda. The sample size was 999, composed of random App users between ages 18 and 64. Since the survey was randomly distributed, the results are slightly skewed towards younger, male respondents.

To get more details about such GeoPoll surveys or conduct a scientific study on advertising or other topics in any region in Africa, Asia, and Latin America, please contact us.

Africa’s Musical: A Survey Report on Music in Africa