The Youth demographic in Sub-Saharan Africa encounter digital advertisements more frequently on a daily basis than any other form of advertisement; Coca – Cola advertisements are the most memorable due to their creativity, this is according to a recent GeoPoll Straw Poll.

In June 2017, GeoPoll engaged 3,710 youth respondents aged between 15-35 years old in Kenya, Uganda, Tanzania, Ghana, Nigeria and South Africa with the aim of understanding how the shift towards mobile usage due to increasing mobile and internet penetration is affecting the reach and consumption of advertising in those countries.

In the first part of this series on advertising to youth in Africa, we focused on the rise in consumption of digital advertising among this demographic. We explored on the advertising call to action, as well as the role that online channels are playing in being a source of information for consumers in their buying process.

In this second and final part of the series, we focus on advertisement recall as well as the most creative advertisements as voted by our panel of respondents of this straw poll. The aim was to determine how easily consumers recall advertisements they encounter on different media daily, which media channels they consume these ads from, and which advertisements they felt were very creatively done hence the recall factor.

The insights from this survey are not representative of the total population in these countries, however, they do give us some valuable pointers on the consumption of advertising by the youth demographic. It also provides insights for marketers, media buying and creative agencies on how their target market is responding to their messaging. 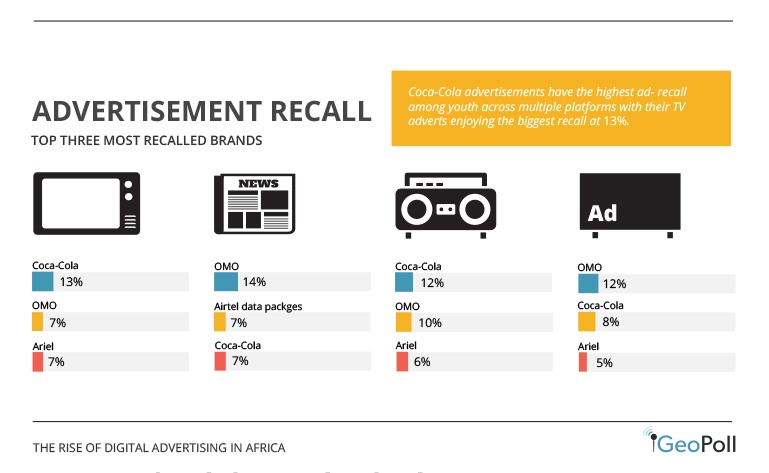 Most Creative Advertisements
Coca-Cola advertisements were picked as the most favorite among respondents across all media due to their creativity and ad-recall factor. Looking at advertisements in the respective media channels, the 3 most listed favorite TV adverts across respondents who consume TV are: 1) Coca-Cola at 11% 2)Nivea Personal Care (6%) and 3)Indomie Noodles and Omo at 2% each.

Brands and Youth Consumers
The strive by marketers, creative agencies and media buying agencies to capture the attention of their target market in unique ways is greater now even as the consumer and media platforms become more segmented. Getting the consumer’s attention is not as easy now; the future promises some curveballs.

The spending habits of Youth consumers in Sub Sahara Africa

Holiday Spending in Africa: How Consumers Plan to Shop in 2019