The Olympics are now in full swing! Prior to the start of the games, GeoPoll conducted a survey to gather information on planned viewing habits, favorite athletes, betting activities, and brand/ad awareness surrounding the event. The study was conducted using GeoPoll’s mobile web platform, surveying more than 3,600 respondents in Kenya, Nigeria, South Africa, Ghana, Tanzania, Egypt, Brazil, Colombia, and China.

GeoPoll produced an initial summary of the research findings along with an interactive dashboard of the research data in mid-July. In this supplemental summary, we detail consumers’ responses to the three open-ended survey questions listed below:

Few Olympic athletes in history have achieved the success and international fame of Jamaican sprinter Usain Bolt. Widely considered the greatest sprinter of all time, his dominance in the past three Olympics continues to make him one of the most popular athletes in the world, despite retiring from competition in 2017. In our study, he was selected as the athlete respondents were most interested in watching during the 2021 Olympics, far more than any athletes actually competing. Michael Phelps, the most decorated Olympian of all time, also received a significant number of mentions despite retiring after the Rio games in 2016. 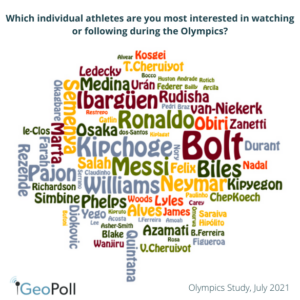 Another all-time great, Eliud Kipchoge, received by far the most mentions of any athlete competing in the 2021 games. The Kenyan long-distance runner is the world record holder in the marathon and odds-on favorite to win the race in Tokyo. Other Kenyan runners who received a significant number of mentions include Hellen Obiri, David Rudisha, Faith Kipyegon, Timothy Cheruiyot, Brigid Kosgei, and Beatrice ChepKoech. In our survey, Kenya’s dominant runners helped make “athletics/track and field” the most anticipated Olympic event in that country at 38%.

Football/soccer stood out as the event respondents are most interested in watching in Brazil, Colombia, Egypt, Ghana, Nigeria, South Africa, and Tanzania. More than half the respondents in Egypt (54%) picked football as their favorite event. That popularity is reflected in the number of football players included in the list of most anticipated athletes. International superstars Lionel Messi (#3), Cristiano Ronaldo (#4), and Neymar (#9) all finished in the top 10. Marta (#14) and Dani Alves (#16) from Brazil and Mohamed Salah (#21) from Egypt ranked highly as well.

In Tokyo, the slogan for diversity and inclusion is “Know Differences, Show Differences,” and the International Olympic Committee has branded the 2021 games as “the first-ever gender-balanced Olympic Games in history.” In our study, the list of the top 10 most anticipated athletes is equally divided with five men and five women.

Three of those women will not be participating in the games. Tennis legend Serena Williams (#6) had already decided not to compete before sustaining an injury at Wimbledon this year. Simone Biles (#7), the winner of four gold medals at the 2016 Games in Rio, has withdrawn from the competition to focus on her mental health. South African runner and two-time Olympic champion Caster Semenya (#10) is among several women who are not allowed to compete because of elevated testosterone levels.

The other two women in the top 10 include Olympic champions Caterine Ibargüen (#5) and Mariana Pajon (#8), both of Colombia.

Support from the business community is crucial to the staging of the Olympic games. The challenge for brands and sponsorship has always been about leveraging enough positive association to justify their investment.

In our study, the brands consumers most associate with the Olympics include a mix of official sponsors and non-affiliated marketers and suppliers. 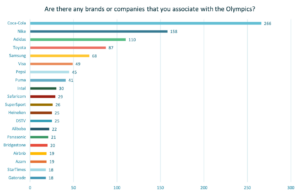 At the top, no brand is more highly associated with the Olympics around the world than Coca-Cola. The company sponsored the 1928 Olympic Games in Amsterdam and has supported every Olympic Games since. Only Nike, the international sportswear brand, was mentioned even half as many times as Coca-Cola. Nike received the second-highest number of mentions, despite being only an “official supplier” rather than a “sponsor” of the Olympics. Adidas, another iconic sportswear brand and official uniform provider (not a sponsor) ranked third in mentions.

However, the next three brands in the list, Toyota, Samsung, and Visa, are all members of the Olympic Partners program – the highest level of Olympic sponsorship, which grants category-exclusive marketing rights for the games.

Toyota became the first car company to sign up as a worldwide Olympic sponsor in 2015. In 2021, with rising COVID-19 case numbers, a state of emergency in Tokyo, and divided public opinion about whether the games should even be happening, the Japanese company decided its executives would not attend the opening ceremonies, and it would not show Olympic-related TV ads – despite being one of the game’s top corporate sponsors.

Advertising for the 2021 Tokyo Olympics

The Tokyo Olympics are being held without fans due to a rise in Covid-19 infections in the city, and that has many TV networks and advertisers concerned. TV ratings for virtually all major sports leagues were down during the pandemic, even as other at-home entertainment options like streaming and gaming skyrocketed with consumers stuck inside. According to a study by Kantar, two-thirds of US sports fans said watching sports during the pandemic was “less enjoyable” than before. Experts attributed those declines, at least in part to the lack of fans in the stands.

Despite those glum statistics, brands are spending billions of dollars in advertising for the 2021 Olympics. No other event compares to the branding opportunities and sheer reach of the Olympic games. And consumers are taking notice. In our study, consumers listed hundreds of different brands whose advertisements they have seen leading up to the Tokyo games. 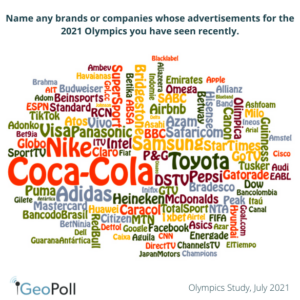 As might be expected, the brands consumers most associate with the Olympics mirror the brands they have noticed advertising for the games. By far the highest number of respondents report seeing ads from Coca-Cola. Despite pulling back its on-site activations and showcases due to the pandemic, the company continues to heavily promote the Tokyo Olympics through its global marketing campaigns.

Olympics advertising often focuses on uniting the people of the world to think positively about the future. Nike’s “Best Day Ever” ads for the 2021 games follow that blueprint, examining how sports can create a powerful tomorrow for champions and everyday athletes. Many respondents in our study (second only to Coca-Cola) claim to have seen Nike’s 2021 Olympics ads. Nike scored a big hit early in the games when the first-ever Olympic gold medal in skateboarding was awarded to Nike athlete Yuto Horigome from Japan. Nike also created the Olympic kits for the national skateboarding teams of Japan, France, Brazil, and the US.

While most of the ads consumers report seeing come from major international brands, several more regional media companies also made the top 20 list, including DSTV from Sub-Saharan Africa, Safaricom from Kenya, Azam TV from Tanzania, Caracol TV from Colombia, StarTimes from China, and SuperSport from South Africa.

Airbnb, a new worldwide partner for the Tokyo Olympics that will reportedly give the International Olympic Committee $500 million through 2028 for the right to be the games’ official housing partner, rounds out the top 20 list of brands producing notable Olympic advertising.

To dive deeper into GeoPoll’s data on the interests, planned viewing habits, and betting behaviors surrounding the 2021 Olympics, click to access the initial report summary and interactive dashboard. The dashboard allows you to view all the data from this study, filterable by country, age group, gender, and question.

This GeoPoll survey was conducted using GeoPoll’s mobile web platform in the week prior to the start of the 2021 Tokyo Olympics in Kenya, Nigeria, South Africa, Ghana, Tanzania, Egypt, Brazil, Colombia, and China, surveying approximately 400 respondents from each country. It is not purely a scientific study as there were no strict measures to limit demographic quotas such as location, gender, and age groups. However, a good mix of young and old, urban and rural, and men and women with a natural distribution was achieved.

To request more information about this study, Olympics audience measurement data, or to get a quote for an upcoming project of your own, please contact us.

Viewership of African Athletes at Sochi 2014