The Olympics are back! After being postponed in 2020 due to the coronavirus pandemic, the games are set to begin on July 23, 2021, in Tokyo, Japan. Although surging COVID-19 rates in Tokyo have forced a ban on in-person fans at events, as many as 4 billion people are expected to experience the Olympics in some form, including watching events live on TV, streaming clips on social media, and being bombarded with ads and logos from sponsors.

In the week prior to the start of the games, GeoPoll conducted a survey to gather information on planned viewing habits, betting activities, and brand/ad awareness surrounding the event. The study was conducted using GeoPoll’s mobile web platform, surveying more than 3,600 respondents in Kenya, Nigeria, South Africa, Ghana, Tanzania, Egypt, Brazil, Colombia and China. The topics covered include:

This post details the initial insights from our survey. View and sort the data across demographics using the interactive dashboard below. 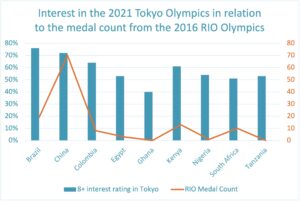 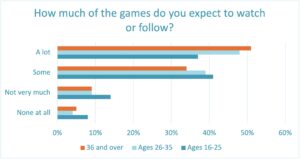 The substantial levels of interest overall explain why 46% of respondents plan to watch or follow “a lot” of the games. That number drops down to 37% for younger male and female respondents (ages 16-25). Only 5% across demographics do not plan to watch the games “at all.” 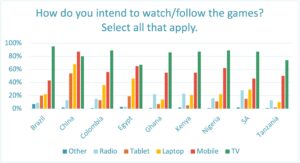 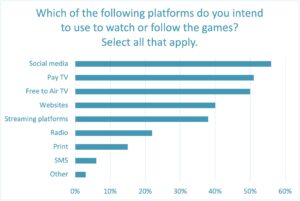 Out of all the respondents that plan to watch/follow the games to some extent, 56% plan to do it through social media. More respondents plan to watch the games via “Pay TV” (51%) than “Free to Air TV” (50%), and most (56%) claim to know which TV stations/channels will be showing the games. Respondents in China are the most informed, with 87% claiming to know. In addition to social media and TV, many also plan to follow the games using “websites” (40%) and “streaming platforms” (38%). Intended platform usage varies significantly across countries and age groups (see the dashboard below).

Variances between countries are even more pronounced when it comes to favorite events. Football/soccer stands out as the event respondents are most interested in watching in Brazil, Colombia, Egypt, Ghana, Nigeria, South Africa, and Tanzania. More than half the respondents in Egypt (54%) pick football as their favorite event.

Kenya’s dominant runners help make “athletics/track and field” the most anticipated event in that country (38%). Athletics is also highly anticipated in Ghana (19%) and South Africa (17%).

Across demographics, the five events respondents express the most interest in watching include:

When forced to pick one event, nothing comes close to football at 33%.

The coronavirus pandemic has cast a dark cloud over the Tokyo Olympics for the past year, leading to eventual postponement in 2020. With COVID-19 cases again on the rise, many Japanese citizens, media outlets, and members of the medical community are calling for the games to be cancelled. Respondents in our study, however, overwhelmingly believe the games should be held in July as scheduled (67%). Men are more likely to believe the games should go on as planned than women (71% to 62%). Only 5% of respondents believe the 2021 Tokyo Olympics should be canceled. Respondents in China, the closest country in proximity to Japan, and South Africa, which is currently dealing with a devastating third wave of the virus, are the most likely to believe the games should be postponed again to a later date (26% and 28% respectively). 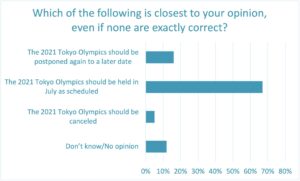 Despite Japan setting strict rules for athletes and spectators to prevent the spread of the virus, several cases have been reported in the week before the games, including three members of the South African football squad. It is unclear whether any athletes that tested positive had been vaccinated. In our study, 58% of respondents strongly support requiring all athletes to be vaccinated in order to compete. Attitudes vary significantly by country, however. In Kenya, 70% strongly support mandatory vaccination compared to 32% in Tanzania. Tanzania has the highest percentage that strongly opposes mandatory vaccination at 17%, likely due to the late President Magafuli’s anti-vaccine stance. Older respondents (ages 36 and over) are more likely to strongly support vaccination than respondents ages 16-25 (64% compared to 52%). 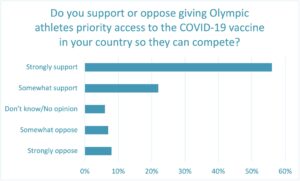 Vaccine availability and distribution remain serious issues across the globe, particularly in developing nations, including several surveyed in this study. Despite delayed vaccine rollouts in their country, most respondents in Kenya (72%), Ghana (68%), Colombia (63%), South Africa (58%), Nigeria (56%), and Brazil (55%) strongly support giving Olympic athletes priority access to the vaccine. Older respondents are more likely to strongly support prioritizing athletes than younger respondents (65% to 48%). Tanzania once again has the lowest percentage that strongly support giving athletes priority access to the vaccine (33%) and highest percentage that strongly oppose it (16%).

Betting on the Olympic Games

The global sports betting industry reached a market size of 203 billion U.S. dollars in 2020. Many countries participate in legal sports betting, one of the more recent additions being the United States in 2019. The increased availability and penetration of mobile technology around the world has played a major role in the recent upsurge in sports betting and paints a bright outlook for its future. According to a report by Technavio, the global sports betting market is expected to grow by $144.44 billion between 2020-2025.

In Kenya, like in many other African countries, gambling is classified and positioned as a legitimate recreational and leisure activity. More than 71% of respondents in Kenya report having engaged in sports betting in the past. At the lower end of the range, only 28% of respondents in Egypt have engaged in sports betting. Egypt and Brazil (43%) are the only countries in our survey below 50%.

The sheer volume of events and athletes included in the Olympics presents a variety of opportunities for sports betting. While 41% of respondents across demographics plan to place bets on an Olympic event, 23% say they are “not sure” – suggesting the number of actual bettors could rise. Almost half of respondents ages 26-35 plan to bet (46%) compared to just 38% of the other age groups. 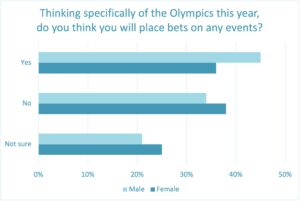 Nigeria and South Africa form two of the largest sports betting markets in Africa. They also express the most interest in placing bets on the Olympics (48% and 46% respectively). At the other end of the scale, only 27% of respondents in Egypt and 28% of respondents in Brazil plan to place bets.

Dive deeper into GeoPoll’s data on the interests, planned viewing habits, and betting behaviors surrounding the 2021 Olympics using the dashboard below. You can view all the data from this study, filterable by country, age group, gender, and question.

This GeoPoll survey was conducted using GeoPoll’s mobile web platform in the week prior to the start of the 2021 Tokyo Olympics in Kenya, Nigeria, South Africa, Ghana, Tanzania, Egypt, Brazil, Colombia and China, surveying approximately 400 respondents from each country. It is not purely a scientific study as there were no strict measures to limit demographic quotas such as location, gender, and age groups. However, a good mix of young and old, urban and rural, and men and women with a natural distribution was achieved.

To request more information about this study or further studies on Olympics viewership and audience measurement, or to get a quote for an upcoming project of your own, please contact us.