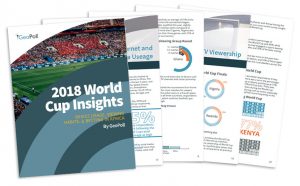 GeoPoll is pleased to release our latest report, which examines viewer engagement and habits throughout the 2018 World Cup in Africa. The report is the second and final release of a two-part series on the 2018 World Cup by GeoPoll. The free, 26-page document examines device usage, viewing habits, and betting on matches in Africa during the tournament. The report includes in-depth data on viewers of the 2018 World Cup in 6 African countries: Kenya, Nigeria, Ghana, South Africa, Rwanda, and Tanzania, and additional insights from a custom survey ran in Ghana, Kenya, and Nigeria.

Social Media and Streaming During the World Cup in Africa

Since the 2014 World Cup, technology advances have changed the way Africans can engage with football programming. The impact of Over The Top (OTT) technology, such as video streaming via smartphones, was felt in Africa in this year’s World Cup due to the ability for viewers to watch on-the-go. Our study found that the mobile phone was the second most used device to follow matches after TV, with 29% of respondents saying they used mobile phones to follow the recent World Cup matches.

In addition to the devices used to watch World Cup matches, GeoPoll’s study also looked to gauge levels of engagement with the World Cup on social media and the Internet. GeoPoll’s study found that in Ghana, Kenya, and Nigeria, social media was the 2nd most popular source of news and information about the tournament after TV, with 40% of respondents indicating TV as their major source of World Cup information and 31% saying social media was their main source for following the World Cup.

Despite the growing usage of online streams and alternative sources to follow the World Cup, GeoPoll found that in Africa, TV was still the most used source to watch World Cup matches. This report expands upon previous findings regarding audience share during the championship match, as well as ranking of the top channels across 6 markets for the finals and third-place game.

Gambling in Africa During the World Cup

In terms of sports betting during the tournament, youth were highly engaged with sports betting throughout the tournament. From our survey in Kenya, Ghana, and Nigeria, GeoPoll found that Kenya led in percentage of respondents who have engaged in sports betting prior to the World Cup, with 80% of respondents having engaged in gambling around sports events prior to the World Cup, while Nigeria and Ghana tied at 55%. Our study also found differences in gambling habits related to gender, age, and lifestyle. Additional findings surround frequency of betting, amount spent, sources of betting funds, betting location, and devices used to place bets.