Cote D’Ivoire is one of the most prominent countries within Francophone Africa, and has experienced high economic growth in the past years. The media in Cote D’Ivoire has played an important role in reporting on recent conflicts and opportunities, however, media is still largely controlled by government-owned media entities. The public Radiodiffusion-Television Ivoireienne (RTI) owns some of the top television and radio stations in the country, including TV stations RTI1 or La Première, a news station, and RTI2 or TV2, an entertainment station. French broadcasters Canal+ and France24 are also broadcast in the country through satellite connectivity and paid subscriptions.

The advertising landscape in Cote D’Ivoire is quite robust following the recent economic growth in the country and boosted by a young consumer base. In 2016 it was estimated that the total advertising spend was $110 million, and international retailers such as the French multinational Carrefour have increased their footprint in Cote D’Ivoire. While traditional media including radio, TV, print, and outdoor advertising remain strong, as higher percentages of the population come online, it is expected that digital modes will also increase in power.

A recent GeoPoll study in Cote D’Ivoire, run in conjunction with GeoPoll Audience Measurement’s regular data collection in the country, examined the usage of traditional and new media, along with purchase habits for several fast-moving consumer goods. 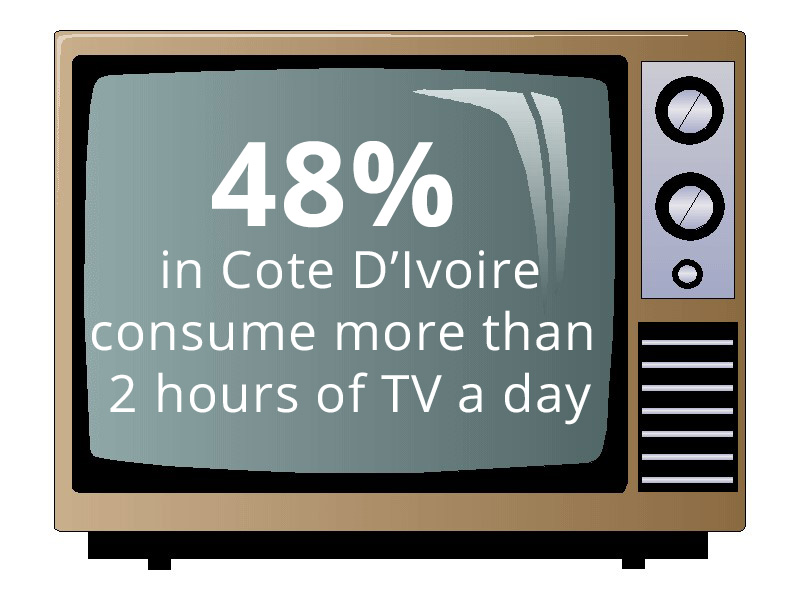 GeoPoll’s study of the media landscape in Cote D’Ivoire finds that Television is the most-consumed traditional media, with 48% watching TV for more than two hours a day, and an additional 43% watching at least some TV each day. The youngest age group (15-24) report slightly higher viewership than older age groups. Radio also performs well, with 32% listening for between more than two hours per day, and a total of 84% listening to radio each day.

Looking at the ratings of TV stations in Cote D’Ivoire for January to February 2020, we can see the dominance of RTI1 and RTI2. RT1 or La Première had a total share of 23% of the TV viewing audience in January 2020, and 16% in February 2020, while RTI2 had a share of 13% in January and 8% in February. Canal+ Sport was the next most popular station, with 8% of share in January and 11% of share in February. Demonstrating the diverse interests of the audience in Cote D’Ivoire, other top stations include Canal+, NovelasTV, NollywoodTV, France24, National Geographic, TraceTV, and SyFy. Stations that are more popular with female audiences include NollywoodTV and Novelas TV, which are both entertainment channels. 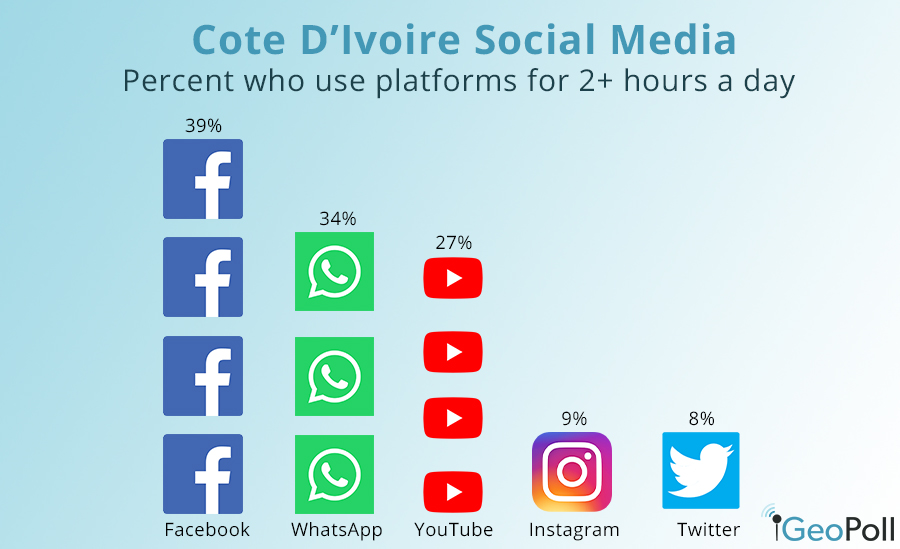 Internet usage in Ivory Coast is low compared to other West African countries such as Nigeria, and GeoPoll found that 41% of our SMS respondents access the Internet on most days, but for less than one hour a day, with only 13% accessing the internet for one to four hours per day. Despite this, several media outlets have started using social media and messaging applications to reach their audience, including La Monde, which has used WhatsApp to grow its audience in Francophone Africa. This study confirmed the dominance of Facebook and WhatsApp in Cote D’Ivoire, with Facebook having the highest levels of use: 39% state that they use Facebook for more than two hours a day, compared to 9% who say the same for Instagram, 20% for YouTube, and 34% for WhatsApp.

Get Data on Ivory Coast TV and Radio Ratings