As part of Kantar-GeoPoll Media Measurement‘s daily surveys on audience habits for TV, radio, and print, GeoPoll is pleased to release this report on top TV and radio stations in Mozambique for Q1, 2016. To learn more about KGMM, see a demo of the system, and sign up for an account please contact us. 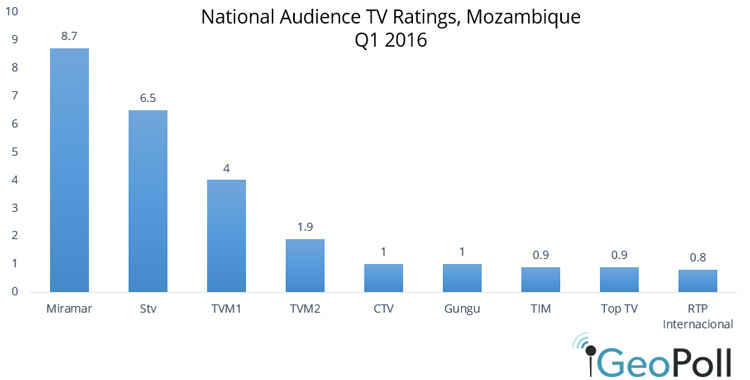 As with other countries, due to the large number of radio stations present in Mozambique it is difficult to determine the top stations nation-wide. When we look at audience share, we see that 47% of those listening to the radio at a given time are tuned in to a station that does not get over 3% of the national audience. Of those that do rank nationally, again Miramar radio leads with an average of 11% of audience share, followed by RM Antena Nacional with 9% of share, 99FM with 6% of share, and Indico with 5% of audience share.  Below is a chart of the top radio stations by share in Mozambique: 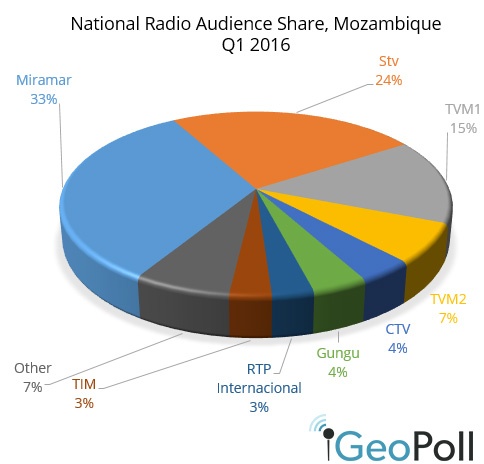 To get a complete breakdown of Mozambique media data, including ratings by region, day-by-day data in 30 minute time blocks for TV and 2 hours for radio, and filtering by demographics and psychographics, please click below to subscribe or see a demo of Kantar GeoPoll Media Measurement.