Using the daily data collected through GeoPoll’s Media Measurement Service, GeoPoll has analyzed the top TV stations in Rwanda for Q2 2015, April 1st – June 30th. We examined both ratings* and share** for the top stations in Rwanda. The below chart shows the average ratings for the top 10 stations during prime time from 19:00 to 21:30. 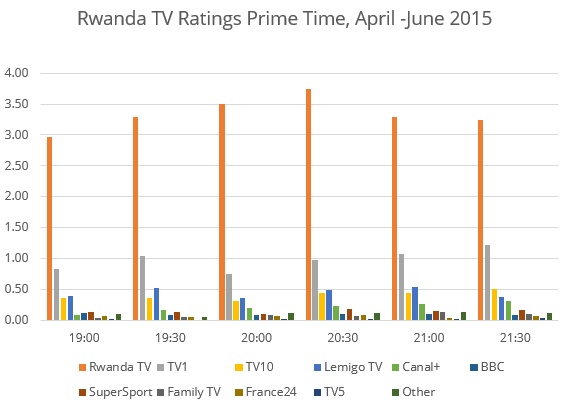 Rwanda TV dominates the Rwandan TV market while TV1 comes in a distant second, experiencing its highest peak between 20:30 to 21:30.  Rwanda TV was for a long time the only TV station in the country and has managed to retain its core audience.  Due to the limited number of TV stations in Rwanda, 60% of the top stations are international stations, including Canal+, France24 and BBC.

GeoPoll also examined average share over the entire period from April 1st – June 30th. GeoPoll found that on average, 5 out of 10 Rwandese who are currently watching TV are tuned into Rwanda TV. TV 1 and TV 10 come in at 2nd and 3rd, and command a combined share of 24%.  TV 1, which only began airing last year, has gained a considerable share for a relatively new channel. Full results are below: 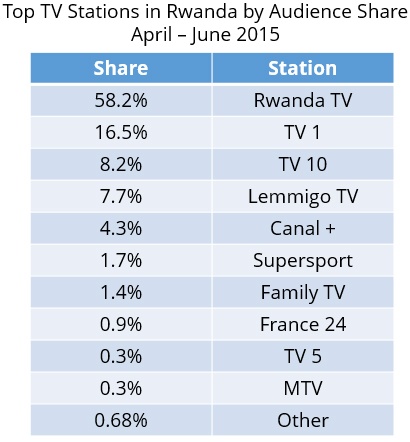