Last month we published the top ten channels in Ghana, compiled from the data included in our new Audience Measurement Service. In May, we collected ratings from more countries, and as our Audience Measurement Service expands we will continue to release highlights on TV ratings from African nations including Ghana, Kenya, Tanzania, Nigeria, Uganda, and more. Each month we will share some insights we’ve found, whether it be the top ten channels of the past month or week, or a more detailed look into one channel or one day of television viewership. Next week we will be releasing World Cup viewership numbers from several African Nations, including Ghana and Nigeria, who have teams playing in the World Cup. We expect to have some interesting findings on TV viewership in Africa over the next few weeks, so keep checking here for updates! 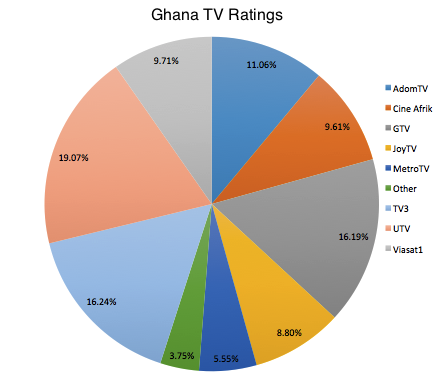 Today we’re looking at the top channels in Ghana, Kenya, and Tanzania for the last week of May. Last time we checked, TV3 was the number one channel in Ghana, but in this particular week UTV, the newest 24/7 TV channel in Ghana, surpassed TV3 in viewership.  TV3 and GTV, the national broadcaster, remained in second and third, with almost the same number of viewers for the week as a whole. Out of the other channels, Cine Afrik had 9.61% of the audience share, Visat1 had 9.71%, and JoyTV had 8.80% of audience share in the last week of May.

In Kenya we see a much different picture: rather than the audience being spread over several channels over the course of the week, Citizen TV was the clear leader, with over 44% of total viewers for the week. Citizen TV calls itself “Kenya’s fastest growing television station”, which we can see clearly demonstrated here. The closest competitor is KTN, with 14.22% of the audience share. The Kenyan national broadcaster, KBC, had only 7.31% of the audience in this week, but we expect this to go up soon, as they are the rights holder for the World Cup games in Kenya. 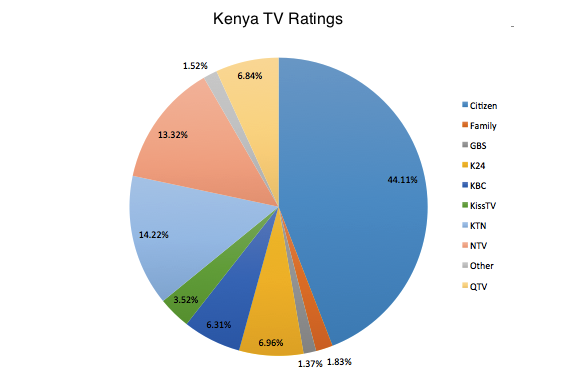 Finally, in Tanzania we measured the audience share of 6 channels: BBC, Channel10, Clouds, EATV, ITV, and Star. In the last week of May we found that ITV was the most popular channel, with 25.66% of the audience share. That was followed by EATV with 23.96%, and Clouds with 16.44%. 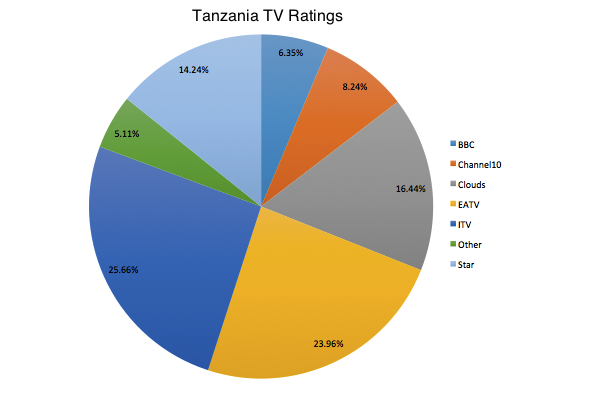