Today we’re looking at the top television stations in Nigeria and how they fared for viewership in the months of June, July, and August. As with our blogs on Kenyan and Ghanaian TV ratings, this data comes from our Audience Measurement Service, a panel-based survey which produces daily data on TV & Radio ratings. Nigeria has the largest population of any country in Africa, and the economy is growing quickly, so it’s interesting to look at how television stations are competing for viewers. 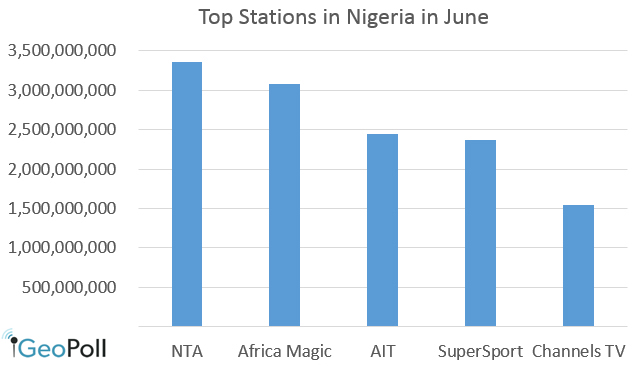 Top Stations
In June, NTA, which is the government-run station and one of the largest and oldest stations in Nigeria, had the most viewers with a total of over 3.355 billion views over the course of the month. Close behind NTA in June was Africa Magic, a more entertainment-focused channel, who had 3.074 billion views. AIT, cable sports channel SuperSport, and Channels TV rounded out the top 5 channels in June. In fact, these 5 stations were the top 5 stations in Nigeria for June, July, and August.  The only change we saw in the top channel rankings over the summer was that in July Africa Magic slightly beat out NTA in terms of viewers. 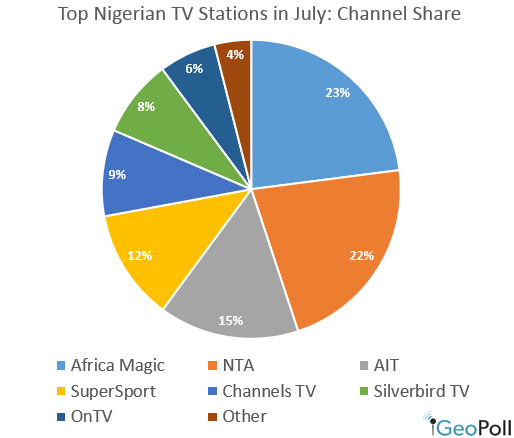 Popular Viewing Times
Our Audience Measurement data looks at viewership in half-hour intervals, so we can use the data to see what days and times are most popular. Unsurprisingly, the most popular time for TV watching stayed consistent over all three months: 6pm, the start of prime-time evening viewership and likely when nightly news shows air. However, we did see an interesting pattern in August, when 2:00pm shot to the second most popular timeslot. In June and July 2pm was one of the top times, but only came in at 10th and 4th respectively.

Get even more detailed data when you sign up for our daily Audience Measurement Service!