In January we shared initial insights on Kenya’s Analogue to Digital Migration, an effort which aims to have the entire country switched to digital TV signals by June 2015. A few months into the migration, we ran another survey to gain insights on the migration and use of set top boxes in Kenya. Here are our findings:

GeoPoll conducted a survey on the 11th of March 2015 to measure the penetration of digital set top boxes (STB) in Kenya. It also measured the satisfaction levels of the digital platform amongst Kenyan consumers. The research was collected through SMS based mobile surveys, conducted amongst 945 respondents across Kenya.

From 1860 people who were invited to participate in the surveys GeoPoll collected 945 completed surveys. All respondents indicated that they had a television in their household. 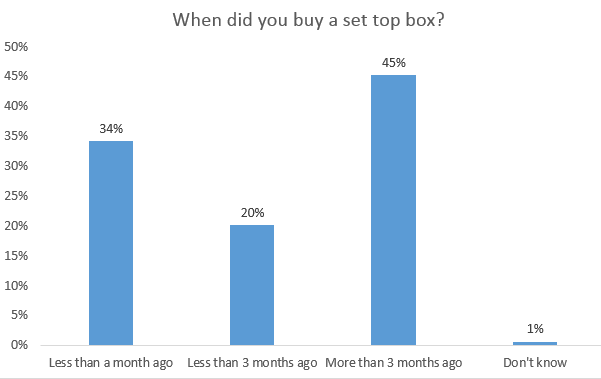 The digital set top boxes penetration was 38% at a national level with Nairobi having the highest penetration of STB at 53%.  GeoPoll’s data demonstrates that the digital switch encouraged the purchasing of STB, with 54% of the respondents indicating that they purchased the set top box during within the last 3 months.

The digital migration was meant to deliver more content with a promise of better picture and sound quality. From the response received, the total percentages of respondents that answered Good or Excellent was 89% for Picture Quality, 91% for Sound Quality, and 89% for Content Quality, indicating that there is a high satisfaction level from people already accessing digital signals.

The digital platform has offered an increased choice of programs and channels available to the consumers. The survey aimed at establishing whether this choice was affecting viewership patterns. Only 33% of the people with set top boxes have maintained their television viewership patterns, with 67% indicating that they were exploring new channels. 34% indicated watching over 15 channels.

The competition for the sales of STB has led to unique offers in the market where the first two months are free and a monthly payment applies after these initial months. 67% of the respondents who purchased STB with this offer indicated that they would pay monthly to continue accessing the premium channels.

Of those respondents who have not yet bought a STB, cost still remains the highest barrier, with 58% saying they were too expensive.  9% indicated availability challenges. 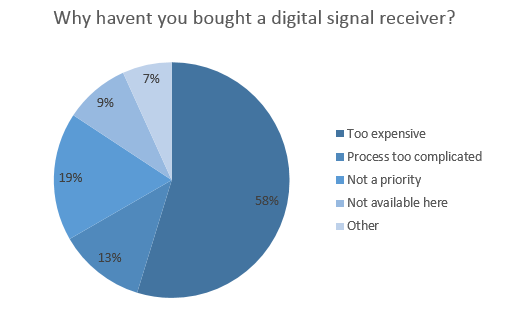 For daily data on media ratings in Kenya, Ghana, Tanzania, Nigeria, or Uganda click below to sign up for our Media Measurement Service.