GeoPoll is excited to announce major updates to the GeoPoll Audience Measurement. Dubbed GAM 3.0. the improved methodology has been tailored to provide advertisers, media houses, agencies, and other users with better media insights for conclusive decision-making in line with the changing media landscape. This update improves upon the methodologies for both television and radio ratings, and introduces new measurement for new (digital) media and print.

This is the latest and one of the biggest improvements we have made on the service over the years, as it remains the most dependable media measurement tool in Africa. 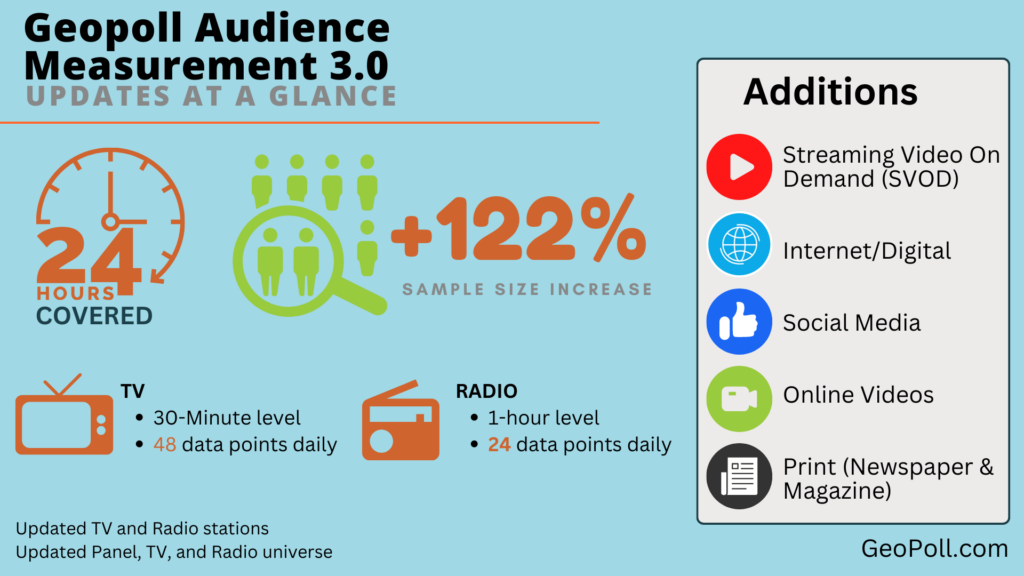 Overall, the new and improved GeoPoll Audience Measurement greatly increases the panel/sample size (122%), number of coverage hours (33%) and maintains a nationally representative sample with weighting across age, gender, and location. To allow for the growth in the number of stations, the list of stations has been expanded to cover most TV and radio stations.

As we found in the Kenya Media Establishment Survey 2022, other media channels, cannot be left out media measurement. The new GAM 3.0 will now include digital media channels and print.

Radio data in the new GAM 3.0 has several upgrades. Data will now be available for 24 hours per day, 365 days per year – an expansion from the previous methodology which did not include ratings between midnight and 6 AM. The data is twice as granular as before, with availability at the 1-hour and each station now has 24 ratings points throughout the day, broken down by several demographic and psychographic variables.

The result of this change is to-the-hour insights for radio listenership utilizing a quick recall period for accurate data measurement, while accurately reflecting expected listenership across the course of a given day.

TV data will now also be available for 24 hours per day, 365 days per year with 30-minute increments. The ratings points are now a whopping 48 daily for each station, broken down by age, gender, location, LSM, and other demographic and psychographic variables.

Users will now be able to see granular changes in the graphs, more consistent with the real TV viewership habits with clearer trendlines as viewership changes throughout the day.

GeoPoll Media Measurement has, over the years, only featured radio and TV, with detours into print from time to time. GAM 3.0 goes beyond traditional media to cover additional channels.

Media data will now be available for Streaming Video On Demand (SVOD), internet/digital, social media, online videos, newspaper, and magazines, with the ability to cross-analyze with TV and Radio data!

The new GAM 3.0 Methodology is now live in Kenya and will be implemented in other countries soon.

For more detail on GeoPoll Audience Measurement’s unique methodology and the update, contact us directly today.