The FIFA World Cup 2022 is underway, and most of the world’s attention has turned to Qatar to follow the biggest sporting event globally! This year’s World Cup is unique in many ways. This is the first time the competition is happening during Winter, moving from its traditional June/July dates to avoid the intense Qatar summer heat. Qatar is the first-ever Middle Eastern nation to host the FIFA World Cup, only the second time the prestigious tournament is happening in Asia after Japan/Korea in 2002.

GeoPoll conducted a study in five countries in Africa – Ghana, Kenya, Nigeria, South Africa, and Uganda – to assess interest in football and the World Cup, viewership habits and plans, gambling, and the level of support both for global countries and African countries. This article outlines the findings.

During half-time, most (55%) keep watching the commentary, 46% switch to their phones and 29% move around to grab a drink or complete other activities. Twenty-eight percent take the opportunity to place or check on their bets. 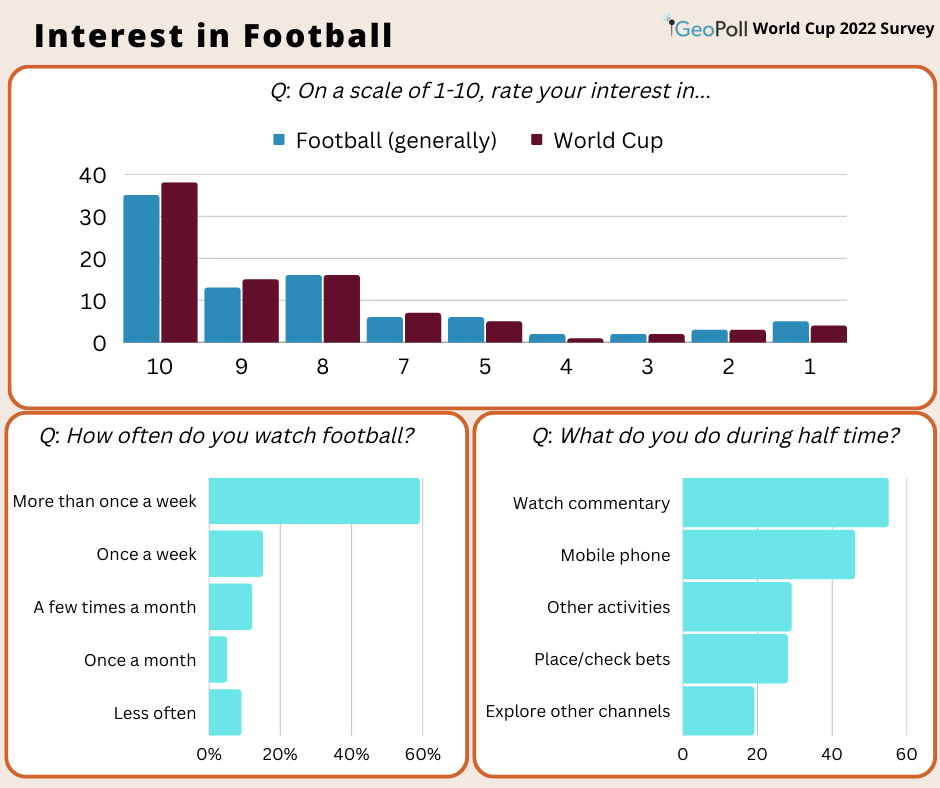 The World Cup is easily the most popular sports tournament in the world. Even those who seldom watch football get pulled into the craze that is the World Cup. A combined 3.572 billion viewers – more than half of the global population – tuned in to the 2018 FIFA World Cup in Russia. In our survey, 38% have the highest interest (10). Overall, half of the respondents rate their interest at over 8 out of 10.

Almost everyone (93%) is watching or planning to watch the current edition of the World Cup games, which is an increase from World Cup 2018 which 85% of the respondents said they watched.

A big number of respondents (85%) were aware of which TV channels in their respective countries will be carrying live broadcasts of the matches.

TV remains the most popular device used to follow the World Cup, with 82% watching on TV. Our recent studies, including the Kenya Media Establishment Study 2022 point to a big media shift towards the mobile phone. Over half of the respondents (54%) say they are following the matches on their phones, which is probably contributed by the fact that, with the tournament in Qatar, many of the matches are happening earlier in the day in Africa, with many people at work, school, or commuting. 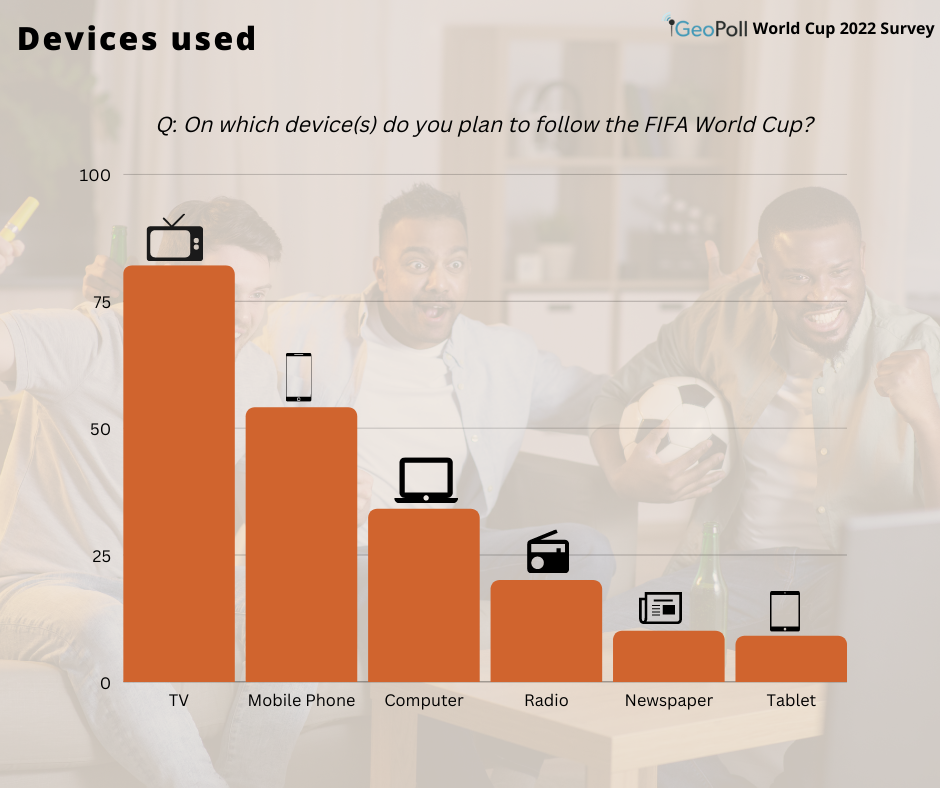 As to the platforms used to watch the matches and other World Cup content, paid TV gets the advantage of showing all the matches. 54% of the respondents are watching World Cup matches on Paid TV channels while 46% will be banking on Free to Air channels. 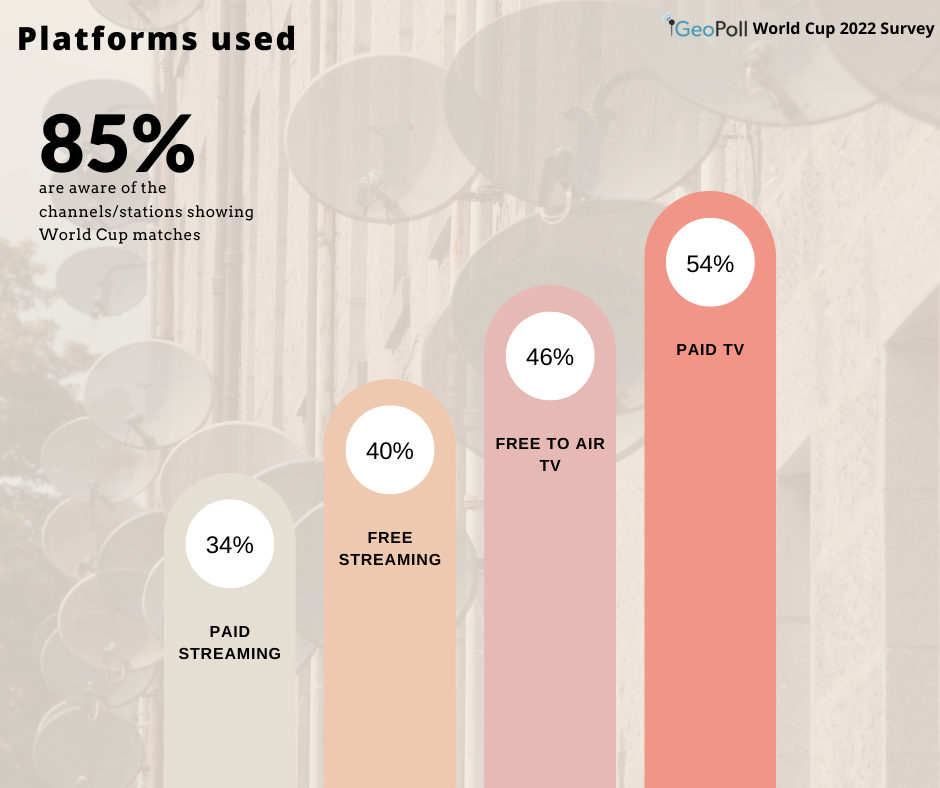 Online streaming is also on the rise, buoyed by the reducing cost of internet in Africa. This might be the reason why paid streaming services such as Showmax are streaming all World Cup matches in Africa, and in our study, 34% plan to stream World Cup matches online. Subscription Video on Demand (SVOD), however, faces stiff competition from multitudes of available free streaming websites, with a good number (40%) depending on them catch up on their matches.

But where will most fans be watching the games from? GeoPoll’s survey finds that for a majority (66%), home is where they will mostly be catching the action from. To highlight the metamorphosis the world has undergone occasioned by the coronavirus pandemic, significantly fewer Africans will be watching World Cup 2022 from restaurants and bars (12%), outdoors (9%), or at friends’ homes (5%).

Gambling on the World Cup

Several GeoPoll studies on gambling over time has shown a high prevalence of betting in Sub-Saharan Africa. In this study, 64% of the respondents said that they have placed a bet in the last 12 months, with Kenya (68%) and Ghana (60%) leading the pack.

Are they betting on the World Cup? Majority are! Sixty-one percent of the respondents said they are betting or plan to bet on World Cup matches. 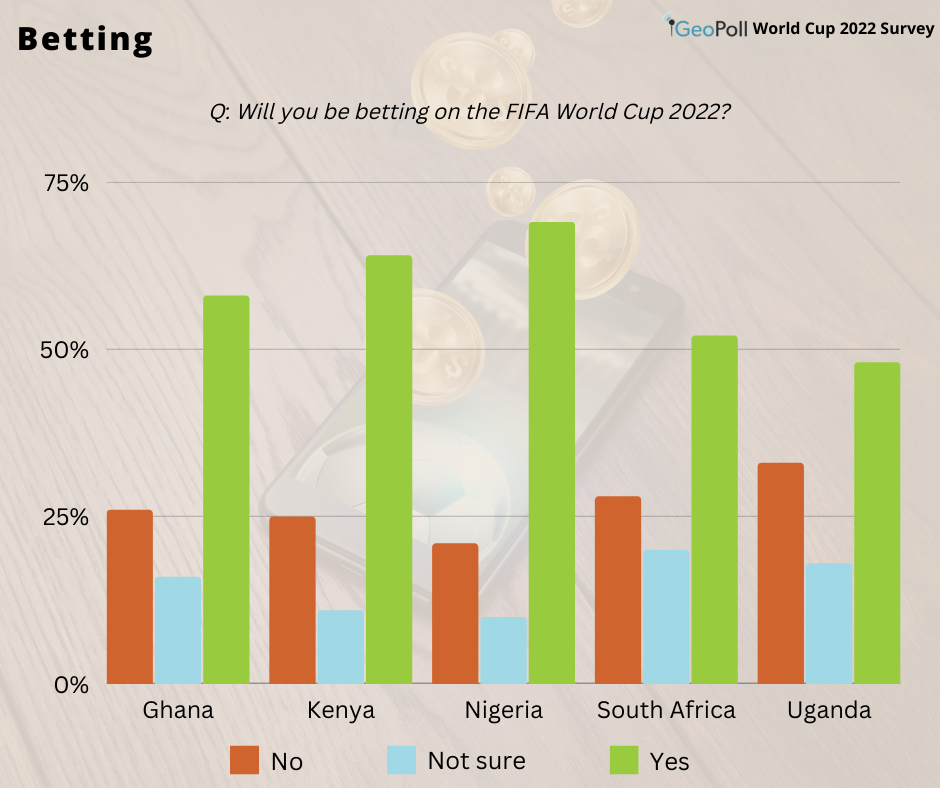 Who will win the World Cup? 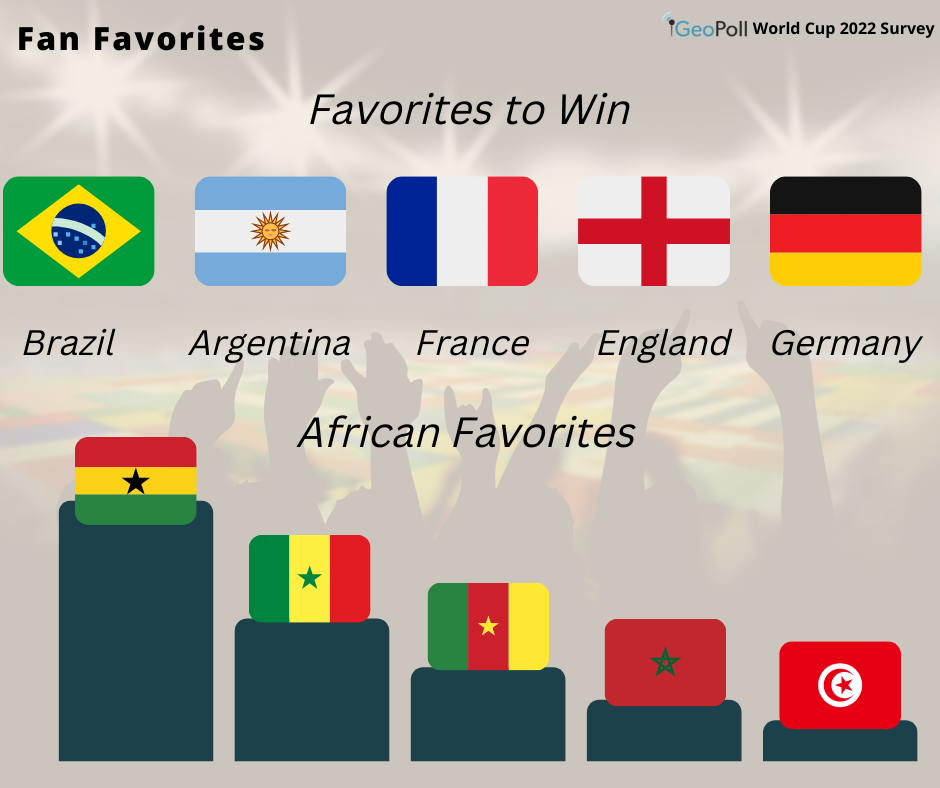 Africa is represented at World Cup 2022 by Cameroon, Ghana, Morocco, Senegal and Tunisia. When we asked the respondents which African team they are mostly supporting in the World Cup, Senegal had the support of most respondents overall (64%). Senegal had the most fans in all countries except in Ghana and South Africa where Ghana polled the most support – 96% and 44% respectively.

The popularity and feel-good fervor of the World Cup provides a tantalizing opportunity for advertisers to capitalize on. With an estimated 5 million people estimated to watch World Cup 2022 and almost universal viewership in most countries, brands, big and small, will try to grab a share of the pie. In the survey, GeoPoll asked respodents to name any brands or companies that came to mind that they have seen running a promotion tied to the tournament.

Beverage company Coca-Cola, sports merchandise brand Adidas, electronics company,  the host national airline Qatar Airways and the PayTV company with a lion’s share of TV rights in Africa DSTV had the most mentions in the open ended question. Other with significant mentions were Budweiser, Nike, Pepsi, Betika, Kenya Broadcasting Corporation (KBC) and Visa.

We conducted this Rapid Survey between 18th and 20th November 2022 via the Mobile Application Mode by targeting a random sample of 1,853 GeoPoll App users in Ghana, Kenya, Nigeria, South Africa and Uganda. Due to the methodology used, the sample skewed towards younger males with access to smartphones.

GeoPoll offers more mobile-based modes than any other research provider in Africa, Latin America, and Asia, allowing our clients to reach their target audience quickly. Our team are experts in producing actionable insights from around the world and guide you throughout the research process. To learn more about the methodology we used in conducting this survey, and learn about our capabilities in different parts of the world, please contact GeoPoll here.