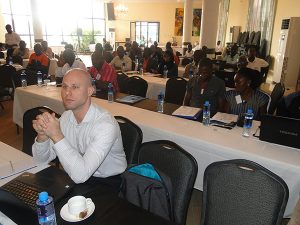 In November, GeoPoll was pleased to participate in the first official Media Market Day in Monrovia, Liberia, hosted by Internews and funded by USAID. The purpose of the Media Market Day was to provide independent media outlets in Liberia with data that GeoPoll has collected as part of an ongoing Internews initiative. Data on radio and TV consumption in Liberia was presented to multiple radio and television outlets so that they could better understand their audiences and make more informed decisions about their advertising and programming. Attendees included representatives from GeoPoll, USAID, the Liberian Ministry of Information, and the Minister of Industry and Commerce for Liberia.

GeoPoll has worked with Internews to collect audience measurement data since 2016, and has previously shared data with media outlets, but this was the first year that the data was presented in a public forum so that media outlets could ask questions about the data and use the data publicly. Data is collected through SMS surveys using the mobile-based methodology that GeoPoll developed as part of its audience measurement product, which was launched in 2014 and has been used to gather audience data in 15 countries throughout Africa, the Middle East, and the Caribbean. 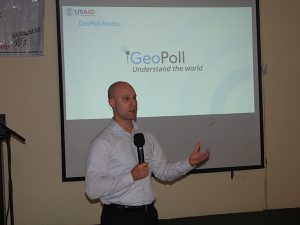 At the Media Market Day, GeoPoll presented the findings, which included data around top watched TV stations nationally, the highest ratings throughout the day, and ratings by gender and age. Media business expert Steve Ahern of AMT Australia explained how stations could use this data to improve program targeting and increase their advertising revenue. The reaction to this data was very positive, as media outlets felt they could use it to better understand their audience and the factors that contribute to ratings, which will ultimately improve their businesses. Interest in similar data for print outlets was also expressed by attendees.  Highlights of the data include the below insights. To learn more about this project or request a copy of the full report presented at the Media Market Day, please contact GeoPoll here.

For more information on GeoPoll Audience Measurement, visit this page.