At a time when there is an increased need for up-to-date data on audience habits in Kenya, GeoPoll is pleased to share insights on radio and television ratings for the first half of February 2019. Using GeoPoll Audience Measurement, which collects daily data on TV and radio ratings in Kenya, we examined audience patterns from February 1-14, 2019. For the below analysis, we focused on the opportunities for advertisers and media owners that may be overlooked when planning media spend or program changes. For full access to GeoPoll Audience Measurement data in Kenya, which includes next-day ratings, share, and affinity broken down by demographics, please contact us. 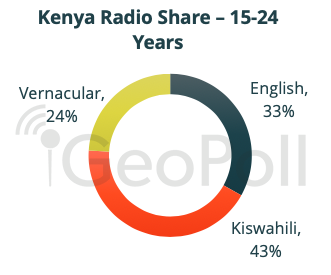 Kenya has a high number of radio stations, including many regional stations which mean only a few stations have a high share when looking at country-wide data. For this analysis, GeoPoll looked at both the top stations throughout the country, and also examined how broadcast language factors into audience demographics. In terms of top stations, GeoPoll data shows that nationwide from February 1-14, Radio Citizen was the leading station with 13% share followed by Radio Maisha with 10% and Radio Jambo in third place with 9% share. 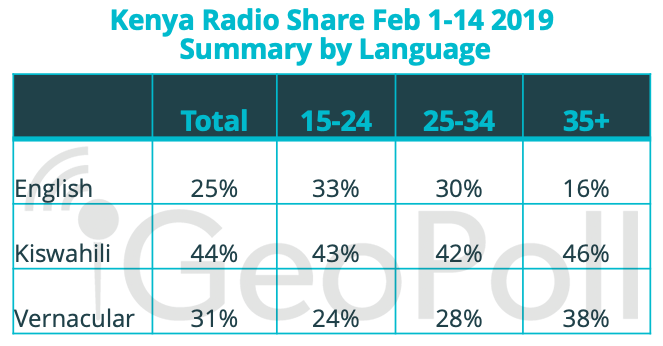 Kiswahili remains the preferred language of broadcast nationally, and across different age groups, it is observed that 46% of radio share for listeners aged 35 years is from stations broadcasting in Kiswahili. Vernacular stations command the second highest listenership amongst older listeners aged 35 years and over, having a 38% share. However, we do observe some differences by age group, finding that older listeners are more likely to listen to Kiswahili or vernacular stations, with only 16% of those aged 35 and older listening to English stations.  By contrast, 33% of audience share for the youth age group (15-24 years old) is for English-language stations.

From February 1-14, Citizen TV has the highest share nationally followed by KTN Home, KTN News, and NTV respectively. Stations that have more female viewers are Citizen TV, Maisha Magic East, and Inooro TV. KTN News, NTV and K24 had had more male viewership in the first half of February 2019. 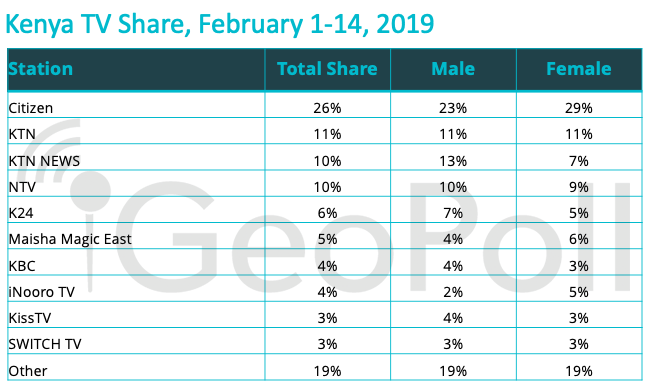 Citizen TV had the highest share of this two-week period on Tuesday, February 12th at 19:00, during Citizen Nipashe News. At this time 41.97% of those tuned in were watching Citizen TV. They also had a high audience share, 41.4%, Saturday, February 9th at 11:30 am, demonstrating their strength during both evening and weekend timeslots. NTV had its highest-rated timeslot at 11:30 am on Friday, February 1st, capturing 26.95% of audience share during that time, while KTN home had a peak share of 25.4% at 18:30 on Wednesday, February 6th, when the Philippine novella The Promise was airing.

In order to identify trends and advertising opportunities outside Nairobi, we looked at TV viewership in all counties except Nairobi. In terms of female viewership for this segment, we found that the most watched timeslot by females was from 10 am to midday. It is also observed that two other time bands are quite popular amongst females. These are at 2 pm and 8 pm in the night, the later mainly dedicated to Telenovelas and Drama Series. Males have peak viewership at 1 pm, 4 pm, 7 pm and 9 pm going to 10 pm, during the time allocated to news for most channels.

When observing trends by age group for those outside Nairobi, we find that TV viewership in the first two weeks of February 2019 is mostly by persons aged 35 years +, with age groups 15-24 and 25-34 years having a lower share of TV viewership across the day. TV viewership for those age 35+ is relatively stable throughout the day, with an increase in the evening hours. The younger age group, age 15-24, has peak viewership towards the end of the day, from 23:00 to 00:00.

To learn more about GeoPoll Audience Measurement or subscribe to our daily ratings data, please contact a member of the GeoPoll team here.