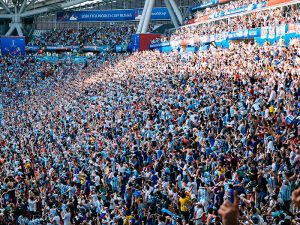 As the month-long football fever comes to an end on Sunday 15th July with France facing Croatia, TV ratings for the World Cup in sub-Saharan Africa have continued to decline. The semifinals took up approximately 29% of all TV viewing audiences at the time of screening, a similar trend from what was seen in the quarter finals, which had an average share of 29% across 6 countries in Africa.

The TV ratings were conducted in Kenya, Uganda, Tanzania, Rwanda, Ghana and Nigeria where both Pay TV and free- to-air channels were beaming the matches. Could this be as a result of the once traditionally favored teams such as Brazil, Argentina, Germany and Uruguay being eliminated in the earlier rounds?

France Vs Belgium Viewership in Africa

France’s national team, Les Bleus, has been christened as the only remaining ‘African team’ due to the high number of players with African origins. However, this did not reflect in the audience numbers for their game against Belgium.  Even in Rwanda, a French speaking country where the national broadcaster Rwanda TV has been broadcasting matches, the viewership was at 35% of all TV audiences, lower than the England vs Croatia match that drew 37%.

England Vs Croatia Viewership in Africa

‘The Three Lions,’ England’s team, were hoping to crush the Croatians, urged on by the slogan that the trophy was ‘going back home’. The showdown between England and Croatia drew a high viewership in most of the countries polled. Kenya had the highest total audience share with 48% of all TV viewers during the game. NTV had the highest share of the numbers with 25%. 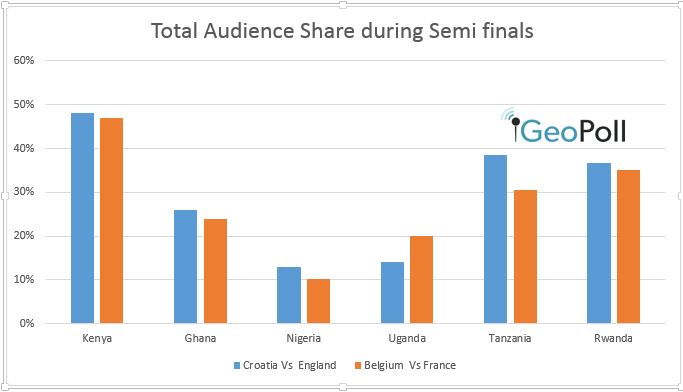 In the quarter finals, the average audience in 12 out of the 36 states Nigerian states was at 15%, compared to just 12% during the semis. In Ghana, 25% TV viewers watched the semis, a 16% drop from those who watched the quarter-finals. 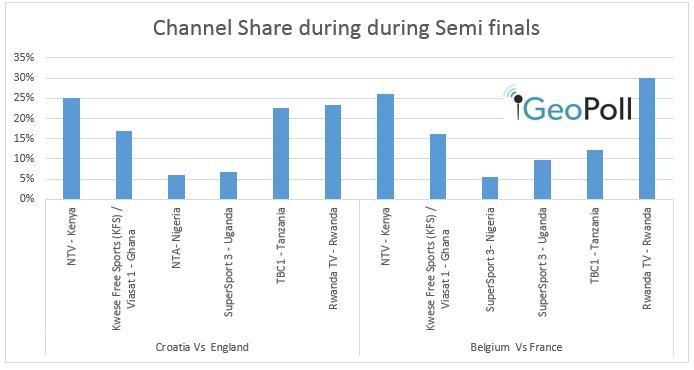 Will the TV ratings recover come Sunday during the finals? On a global scale, more than one billion fans tuned in to watch the final of the 2014 FIFA World Cup Brazil™, according to final figures from FIFA and Kantar Media. We will be following the viewership in the African continent and providing you with viewership insights from the final in the days following the match. Contact us now to get deeper insights into World Cup viewership in Africa or to sign up for our audience measurement service, which provides daily TV and radio ratings for multiple countries in Africa and beyond.