The World Cup finals in Russia had the highest viewership in Sub-Saharan Africa of all matches, GeoPoll data shows. An average of 36% of all TV viewers in the 6 countries observed by GeoPoll (Nigeria, Uganda, Kenya, Ghana, Tanzania, and Rwanda) witnessed the fast-paced match which saw France beat Croatia to win its 2nd World Cup title. Channels that had secured FIFA broadcast rights experienced the highest TV ratings recorded during the last one month, with some locking in up to 58% of all TV viewers in their respective countries.

Audience Ratings record highest increase
After witnessing the loss by England and Belgium to make it to the finals, the third-place match didn’t garner as much interest, drawing an average of just 20% of viewers. Despite a decline in viewership as seen in the semi-finals, where the average viewership was at 29% of all TV audiences, down from an average of 33% share during the quarterfinals, viewers of the final match shot up by 7%, with Kenya recording the highest share of TV viewers who watched as France took the trophy at 58%. 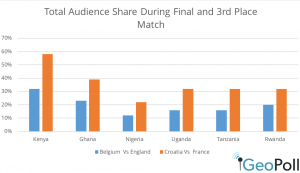 TV ratings for the channels beaming the World Cup in Sub- Saharan Africa recorded the highest ratings during the final clash of football titans as the French team – Les Bleus –  secured their place in history.

As national broadcasters had secured broadcast rights to screen some of the matches, this saw a significant drop in audiences during the quarterfinals. However, they quickly regained their share of viewers of the game during the semifinals and an increase during the final match. The channels that gained significantly during finals were; Rwanda TV with a 31% share of TV viewers; TBC 1 in Tanzania with 25% share;  NTV in Kenya with a 32% share. Kwese Free Sports channel had an audience share of 15% in Ghana, 10% share in Nigeria and 17% share in Uganda respectively. 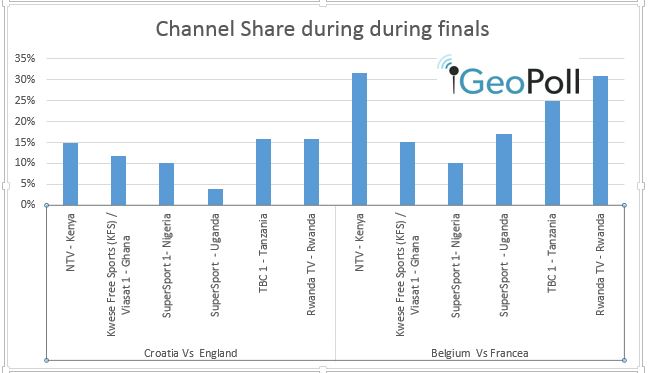 The GeoPoll Audience Measurement service has been running in 6 African countries namely Nigeria, Uganda, Kenya, Ghana, Tanzania and Rwanda, collecting TV ratings and viewership numbers throughout the World Cup season. Contact us now to get a copy of our World Cup audience measurement insights report with a breakdown on: