What is a Likert Scale?

The term Likert comes from the creator of the Likert Scale, Rensis Likert, a social psychologist who invented the scale in the 1930s, and Likert scales are now so commonly used that the term is often used interchangeably with any type of rating scale. While Likert scales are a type of rating scale, they are specific in that they provide respondents with a range of text-based answers that lie along a scale. A full Likert scale consists of a series of related statements, but the term is also used to describe a single-statement question with ‘Likert-type’ responses: 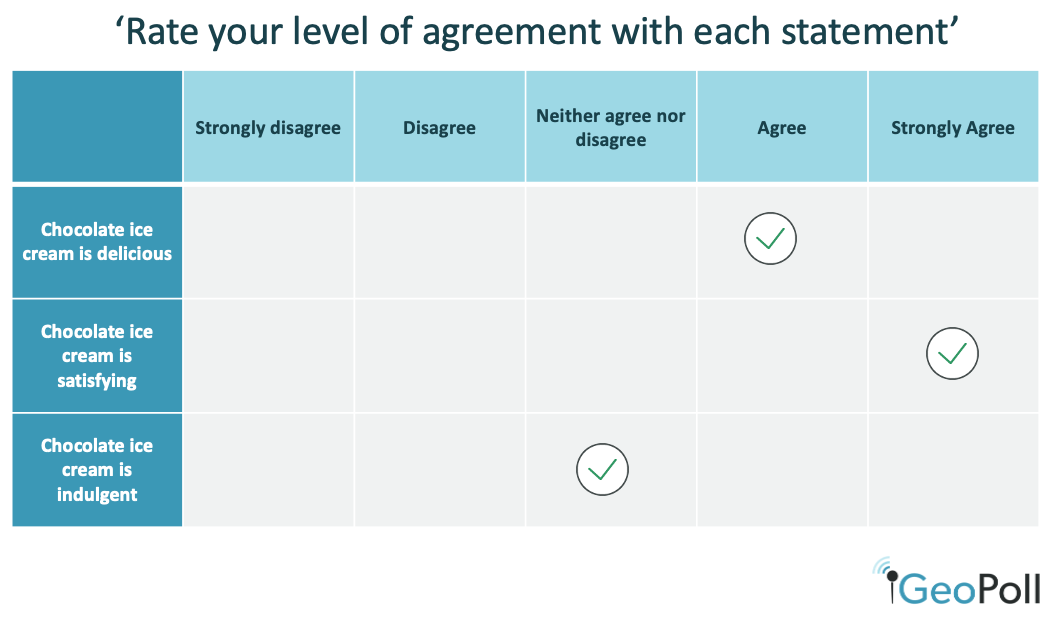 Likert scales or Likert-type questions are often used to rank level of agreement with a statement on a scale from 1) Strongly disagree to 5) Strongly agree, however they have a wide range of uses and can also measure items including frequency, quality, importance, and satisfaction. Likert scales can be either unipolar, which measures on a one-way scale, such as from ‘not at all helpful’ to ‘very helpful’, or bipolar, which measures two opposite forces – for example ‘agree’ versus ‘disagree’ or ‘satisfied’ versus ‘dissatisfied’. In either case, the first option should be the furthest in sentiment from the last option.

Likert scales are most commonly 5-point or 7-point scales with a neutral middle-point, such as ‘neither agree nor disagree’ ‘neutral’ or ‘undecided’, but 4 or 6-point Likert scales which eliminate a neutral option can be used when a researcher wants to force a respondent to provide a clear opinion. While a 7-point Likert scale can provide an even greater level of granularity than a 5-point Likert scale, respondents may find it harder to distinguish between the options in a longer scale. Since a 7-point scale takes up more room on a screen, 5-point scales are often preferable for survey modes such as SMS or other mobile-based survey modes, which limitations around question length or screen size.

SUGGESTED  Focus Groups: How they Work, and Major Considerations

In addition to the granularity they bring over to survey research, Likert scales are useful as they provide a number of pre-written answer options that are applicable to a wide range of scenarios, from customer satisfaction to public opinion research. For example, the ‘disagree to agree’ Likert scale as shown below can be applied to nearly any topic by asking respondents to rate their level of agreement with a statement regarding brand affinity, political beliefs, and more. Some of the most useful Likert scale question examples include:

To write a good Likert scale or Likert-type questions, researchers should ensure that the statement or statements being evaluated is clear, the answer options are distinct from each other (as demonstrated in the above pre-written choices), and the scale encompasses all possible options, rather than assuming an experience was satisfactory or that a respondent will positively react to a statement.

SUGGESTED  How to Conduct IVR Surveys: A Step-by-Step Guide

At GeoPoll we have a range of experience in developing Likert scales and Likert-type questions for multiple methodologies, including SMS surveys, voice call surveys through Computer Assisted Telephone interviewing, and link-based surveys. To learn more about our capabilities or speak to a member of our team about an upcoming project, please contact us.