The coronavirus pandemic has upended the daily lives of people around the world. In this post, we will take a look at how the pandemic has affected the television landscape in Kenya by comparing viewership trends from 2019 with 2020’s trends thus far. 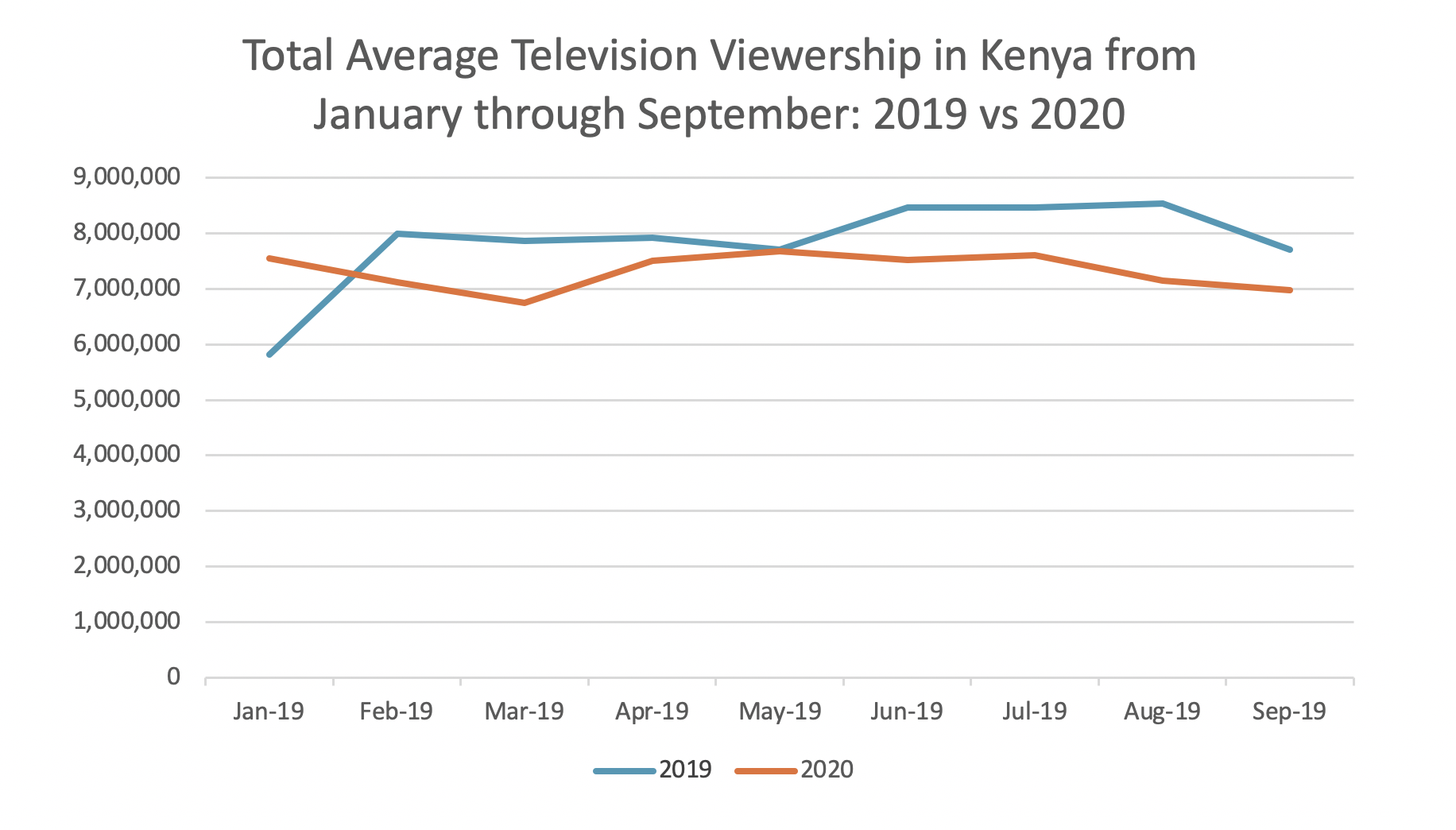 It is likely that many factors contributed to the lower viewership numbers in 2020. However, there are a couple of factors that we feel are worth specifically mentioning in this report. First, we believe that the overall decline in television viewership numbers is in part due to the increased penetration of alternative media platforms—like Video-On-Demand, streaming VOD, YouTube, and creative content on social media platforms—that are direct competition to television viewership. In fact, earlier this year, a GeoPoll study found that the top 3 influencer personalities have been playing their trade mostly on YouTube, Instagram, and Facebook—which emphasizes the impact that internet-based forms of entertainment have had on the media landscape in Kenya.

Another factor that likely has led to a decrease in viewership is the financial strain caused by the pandemic. With so many Kenyan’s unable to work due to social distancing, more people are living hand-to-mouth than before the pandemic. In fact, in a recent GeoPoll study on the financial impact of Coronavirus in 5 sub-Saharan African countries, 49% of respondents reported that their incomes decreased significantly due to the pandemic. In the same study, 71% of respondents reported that they were more concerned with paying expenses now than they were before the pandemic, and Kenyan respondents were covering expenses with loans and credit more than any other source. The findings from this financial impact study, combined with the trends seen in television viewership throughout 2020, lead us to believe that Kenyan’s had tighter budgets and television viewership was limited in-part due to electricity and cable costs. When we take a look at the viewership levels of the top stations on average during the time period, we can see that Citizen TV’s viewership increased from 2019 to 2020, even though there was a decline in television viewership overall in 2020. This finding shows that Citizen TV was even more popular in 2020 than it was in 2019.

A few factors may have led to an increase in viewership for Citizen. First, our 2020 data presented in this report was predominantly from months effected by the COVID-19 pandemic. During the pandemic, news content was consumed more often than average because people were seeking the latest updates on the pandemic. Additionally, children were at home, rather than school and day-care, during the lockdown period. Due to children being home constantly, parents have been seeking out more educational, yet entertaining, television content for their children. We believe that these two reasons are the primary drivers behind the high viewership of Citizen, as well as the viewership of stations that kept their viewership similar to last year’s viewership, despite average television viewership numbers lowering overall in 2020 compared to 2019. 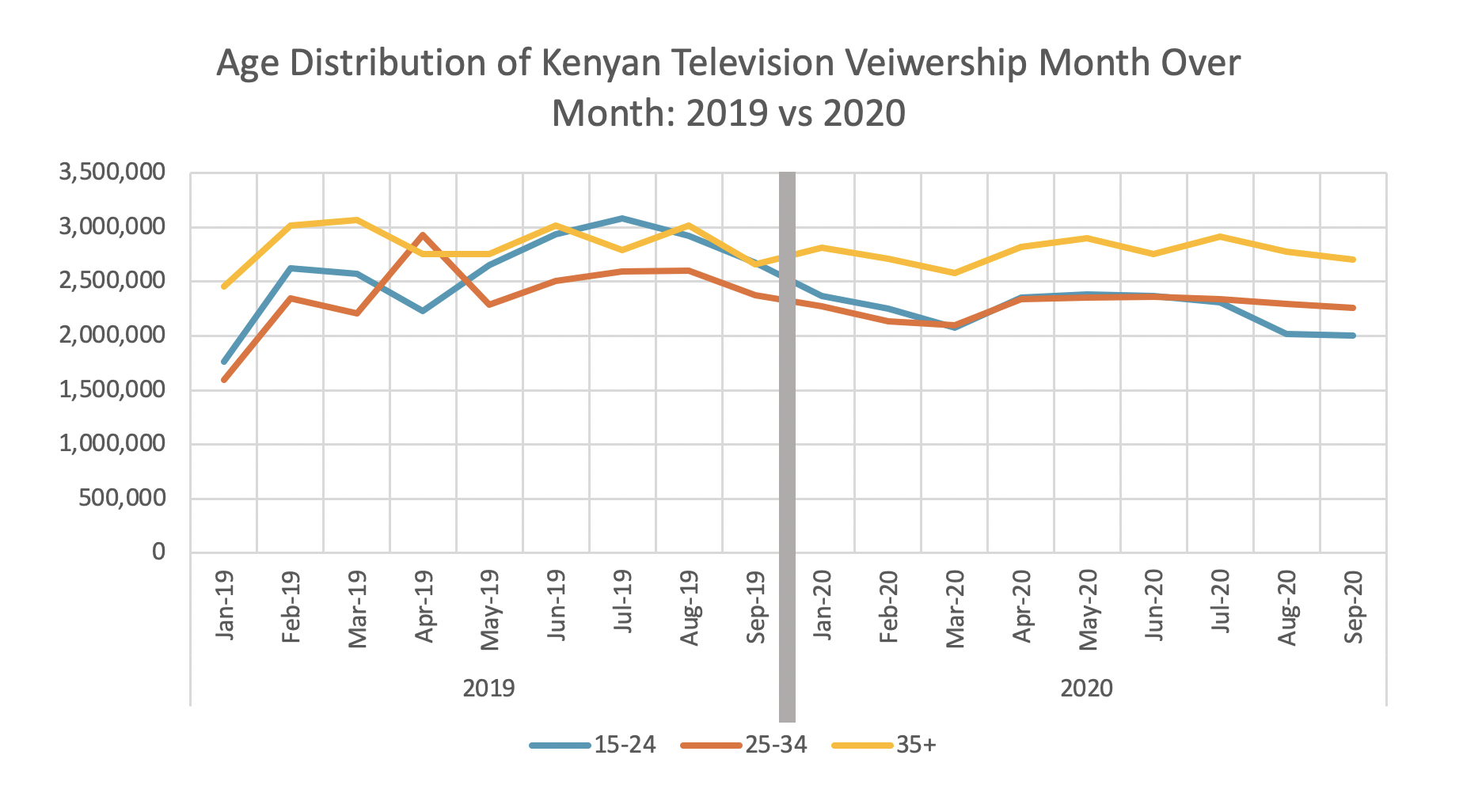 GeoPoll’s proprietary Audience Measurement platform collects data from thousands of respondents, multiple times a day, on media consumption. The data is available in one-off reports, recurring reports, or an all-access monthly subscription. To learn more about how GeoPoll’s Audience Measurement data and tools can help inform your next campaign, contact us today.