The variation from the typical day-to-day routine that many people experience during the holiday season can impact television viewership behavior. Media buyers need to anticipate such behavior changes and adjust in order to make valuable ad placement decisions. In this report, we will present GeoPoll Audience Measurement data on television viewership trends from 2018’s holiday season in Ghana to inform readers of consumer behavior during that time.

The data presented in this report represents only a small portion of the data on TV and Radio trends collected by GeoPoll each day. To request custom GeoPoll Audience Measurement reports or subscribe to daily data from GeoPoll, please contact us here. 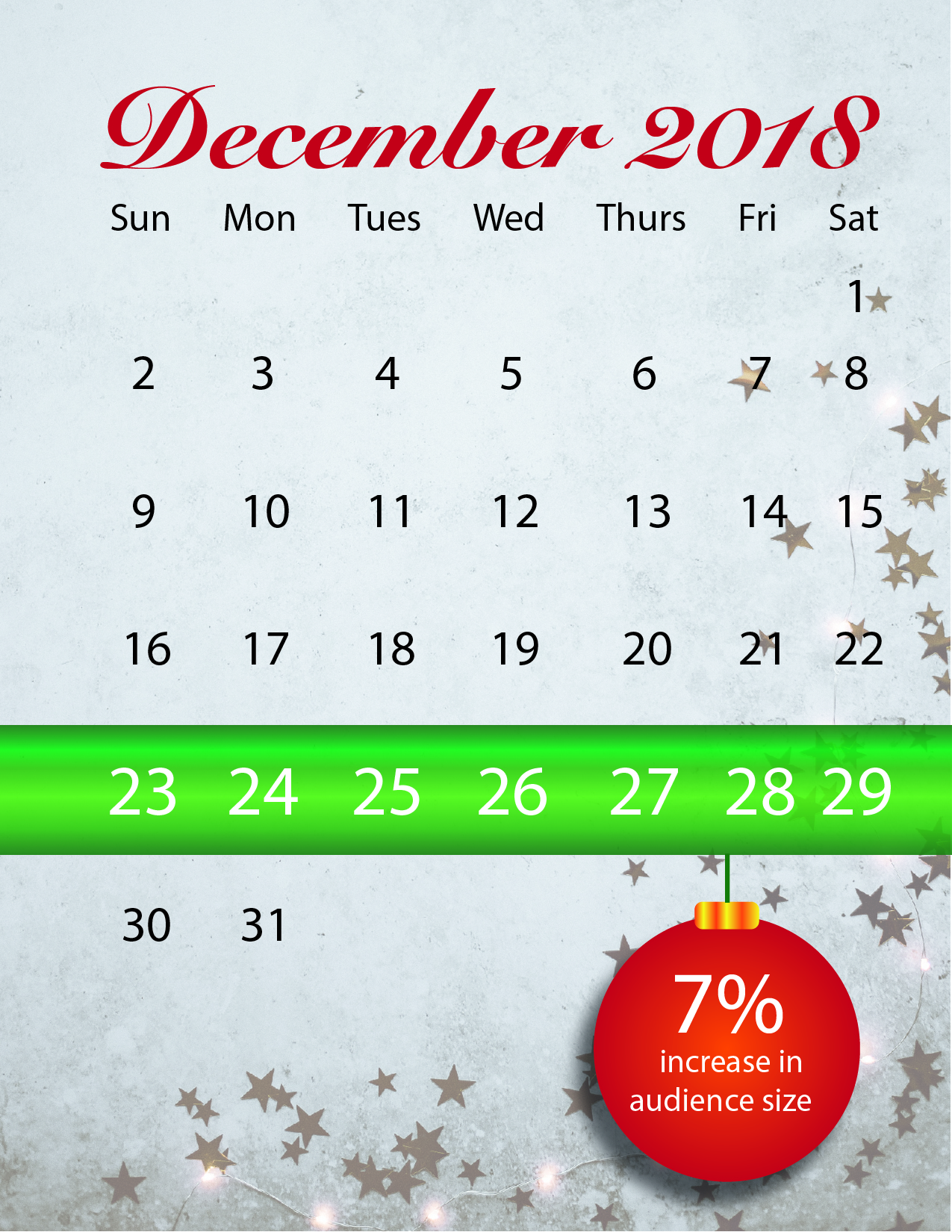 In order to determine the popularity of television viewership during the holiday season, we began by looking at audience size throughout the month of December. The audience viewership numbers were then compared to average viewership numbers from October and November. Upon analysis, we found that the total number of people watching TV was 7% higher the week of Christmas than the average weekly viewership from October through ­December. This increase in viewership was likely due to people not working as much during the week of the Christmas holiday. This takeaway is supported by an additional insight found that showed that male weekly viewership is 10% higher the week of Christmas compared to the average weekly viewership from October-December, while female viewership is only up 3% compared to the same time. Seeing as more Ghanaian men are full-time workers than women, it could be assumed that men have more time for television viewership during the week of Christmas than the other weeks of October through December. Another viable explanation for this insight is that the holidays are a busier time for women than men because women are more often responsible for the work surrounding holiday gatherings.

To go beyond overall audience size and see how shifts in viewership fluctuated per station, we also investigated and analyzed audience share. In this section, we will discuss some of our specific findings on share per differences seen in two key demographic categories: gender and location. 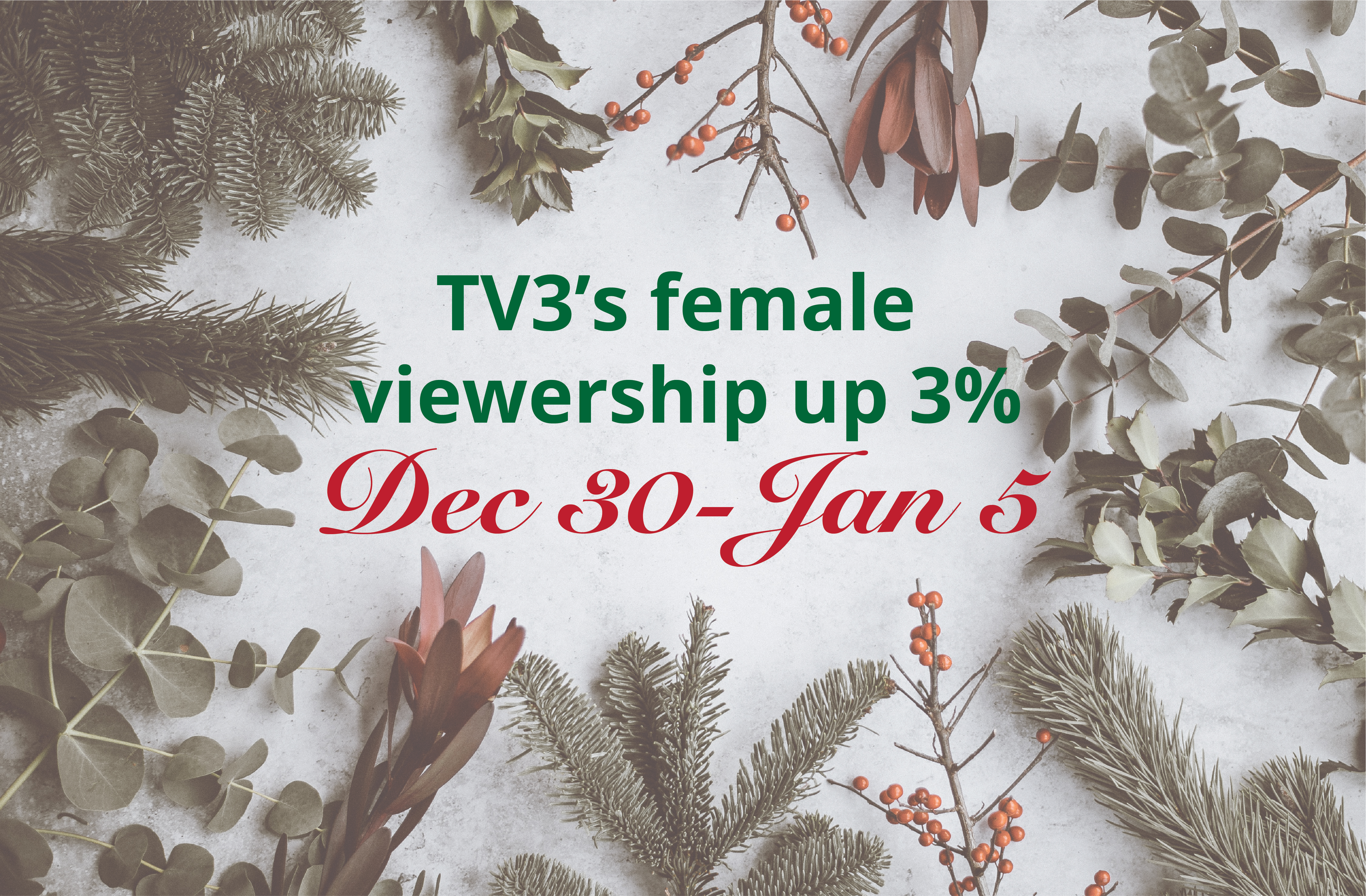 TV3 broadcasts a variety of programs, everything from telenovelas to news, so the reason for the increase in share may have been due to a multitude of factors. AdomTV’s programming has a slightly stronger appeal to female audiences in general. The change in viewership seen may have resulted from women spending more time on home improvements and cooking following the holiday, while male counterparts take a respite and spend more time than usual watching television. 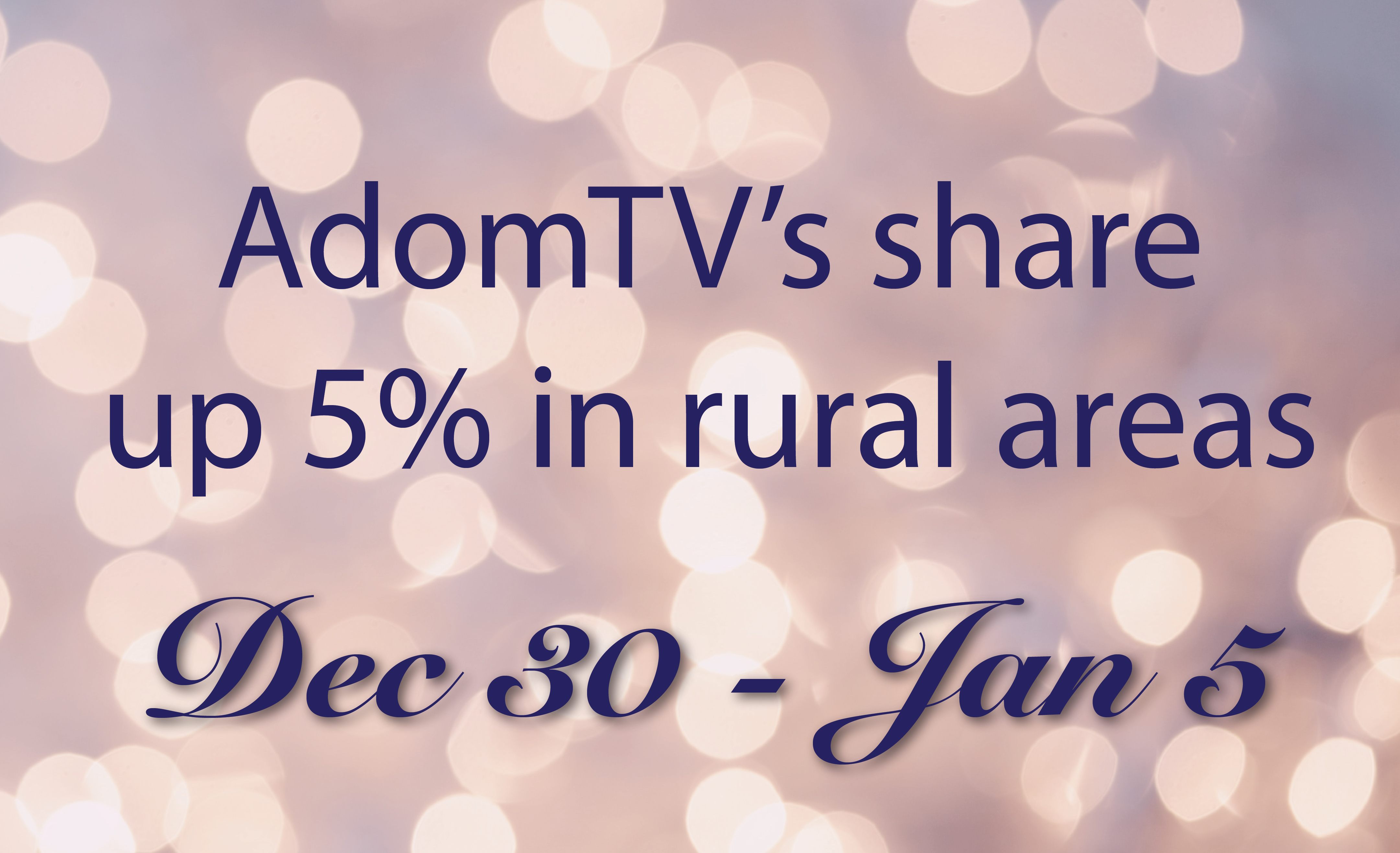 When viewership trends were examined by location—urban versus rural—there were a few notable differences. First, AdomTV’s share was up significantly more in rural areas than urban areas the week following Christmas. In rural locations the week following Christmas, AdomTV had a 23% share. The average weekly share for the station from October through December in rural areas was 18% and, meaning that AdomTV was up 5% share from December 30-January 5 compared to the average share seen on the station from October through December. This increase in share in rural locations for Adom TV could be due to urban residents returning to their villages to spend time with extended family around Christmas time. Adom TV typically appeals to rural audiences more than most other stations so it is logical that share increased in rural areas following the holiday.

How TV Ratings in Ghana Change over the Holidays

GeoPoll data shows that Ghanaians interacted with television differently than usual surrounding the holiday season in December of 2018. The audience size was up 7% the week of Christmas compared to the average audience size between October and December, but despite the increase in viewership the week of Christmas, most of the fluctuations in station share were most notable the week following Christmas. These findings help predict that viewership during the 2019 holiday season will likely also differ from the average viewership from October through December.

If you are a media buyer preparing strategic ad placement purchases for the holidays, GeoPoll Audience Measurement technology can help you make informed decisions. The online dashboard allows for the investigation of countless audience viewership and listenership data points in increments as small as 30-minute time blocks. Features like the media planning tool can help you easily find ad placements within your budget that meet your strategic audience reach and GRP goals, and the post-campaign evaluation tool can help you determine the performance of your past campaigns. For more on how GeoPoll Audience Measurement can help you, watch this video below and contact us for more information, today.