GeoPoll is pleased to release select television and radio viewership data from Uganda from October through December of 2019. This report represents a small portion of the data collected daily by GeoPoll on trends in television and radio audiences. Audience measurement data collected by GeoPoll is uploaded to an online dashboard each day and provides data at 30-minute time block increments. To request custom GeoPoll Audience Measurement reports or subscribe to daily data from GeoPoll, please contact us here.

Overall, NTV retained a higher percentage share than NBS for both daytime and evening news programming broadcast in English. NTV at 1 and NTV Tonight each had 4% more share on average, across all days of the week, than NBS Live at 1 and NBS Live at 9. NTV at 1 was most popular among program viewers on Saturdays when the program maintained a 17% share of viewers. NBS’s program, Live at 1, was most popular on Tuesdays and Thursdays with 12% share of viewers. NTV Tonight was most popular among viewers of the program during the Monday night broadcast between 9 and 10 p.m. with 19% share. NBS Live at 9 also had the most viewers on Monday nights between 9 and 10 p.m. with 14% share during the time period.

Agataliiko Nfuufu, Bukedde 1’s news program that airs daily from 10-11 p.m., was a very highly watched program in the Luganda news category. The program had a 24% average share during the 4th quarter of 2019. When broken down by gender, the average share was 9% higher for female viewers than male viewers. Additionally, viewership was highest for the 15-24 age group, 29% average share. The 25-34 age group followed with 21% average share, while the 35+ age group was not far behind with 19% share. 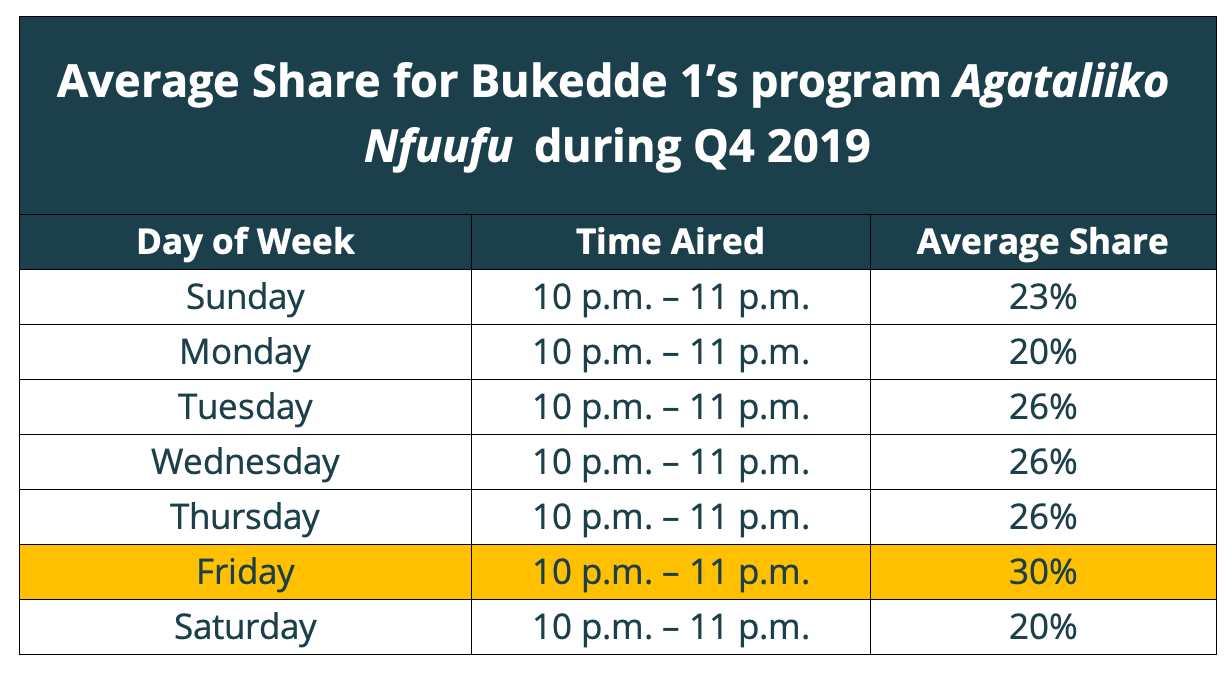 Morning Crew, an English breakfast show program on Capital FM radio, towered above the other programs in the category with 11% share across each broadcast Monday-Friday during Q4 of 2019. Behind Morning Crew, were Morning Saga on Galaxy FM with 2.4% share and The Wake-Up Call on Spirit FM with 1.7% share.

The top share earner of Luganda Breakfast radio shows was Super FM’s program, Zukuka, with 3.3% share. Beat FM’s Sisimuka followed with 3.1% share and Radio Simba’s program, Binsanga Wano, came in third with 2.9% share. Each of these program’s share was within a few tenths of a percent from each other, meaning competition for viewers between the programs is strong. When compared to radio breakfast shows in English, the breakfast shows in Luganda fell behind Capital FM’s Morning Crew but before Galaxy FM’s Morning Saga or Spirit FM’s The Wake-Up Call. This indicates that radio breakfast shows in Luganda are popular overall, just not as popular as the highly popular program, Morning Crew.

On Tuesday evenings from 10 – 10:30 p.m., Galaxy FM broadcasts a popular radio show called Night Breeze. The program focuses on crowd-sourced advice on matters surrounding love and relationships. Before each episode, a problem is shared—either on air or via the station’s online platforms—then during the show, the listeners are prompted to call-in or share their advice regarding the problem at hand on social media.

As shown, GeoPoll’s granular audience measurement data is a flexible source of information. The Online Ratings Book can provide GeoPoll’s rating data based on a variety of demographic and psychographic information—like gender, age, location, LSM, etc.—in a platform that provides unique audience metrics at steady intervals throughout the day. To learn more about GeoPoll Audience Measurement, contact us today.