Ghana has one of the most diverse and applauded media landscapes in Africa; their press has been free since 1992, when a new democratic constitution was introduced, and the country scores high on press freedom from groups such as Reporters without Borders and Freedom House. In 2014 Ghana ranked #27 on Reporters Without Borders’ World Press Freedom Index, ahead of the United States and United Kingdom, and behind only two other African nations, Namibia and Cape Verde. 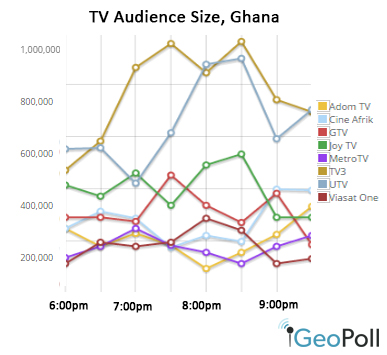 UTV and TV3 both have consistent peaks in viewership, which are apparent both on weekdays and weekends. TV3’s daily peak is from 7:00 – 8:00pm, with an average of 695,000 viewers per night tuning in to their news program, News360. Unsurprisingly, the ratings for News360 are slightly higher for Monday-Friday than Saturday-Sunday, with 727,000 viewers on average tuning in to TV3 in the 7:30 – 8:00pm time slot on weekdays.

Below is the full list of the top national stations and their average number of viewers per half hour. 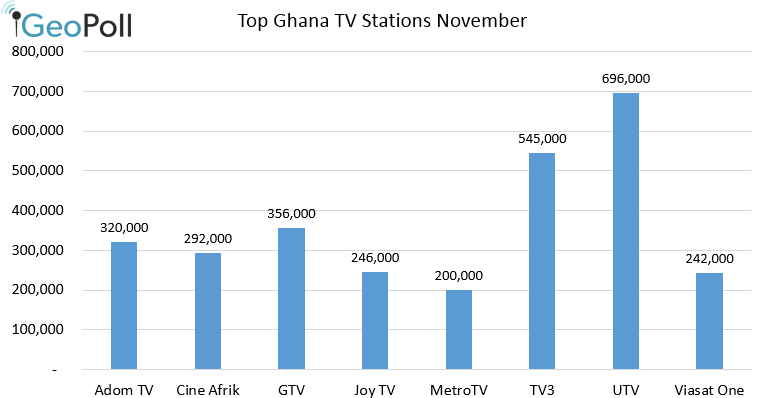 Top stations in Ghana, by average number of viewers per half-hour in November.

Interested in more data like this? GeoPoll’s Audience Measurement Service produces daily data on TV and Radio ratings in Ghana, including both national and regional stations. Click below to contact us for more information.