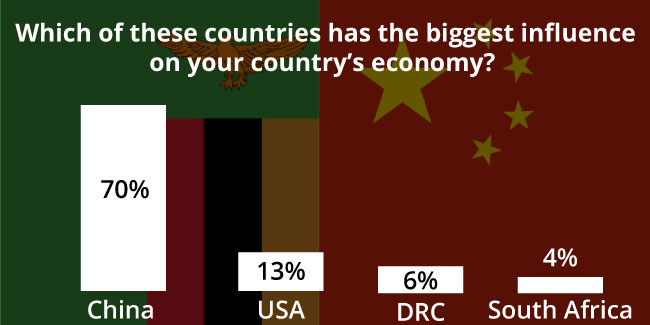 Zambia, which is located in between Southern and Central Africa and is bordered by 8 countries, is a nation of rich natural resources including copper, and yet has struggled throughout its history with poverty, inequality, and food insecurity. Despite being recognized by the World Bank in 2010 for its consistent economic growth, which averaged over 7% a year from 2004-2014, 63% of Zambia’s population remains under the global poverty line. Food security, particularly for children who often suffer from malnutrition and stunting, is an ongoing concern, emphasized by the World Food Programme’s recent 76-million-dollar investment to improve food security throughout the country over the next five years. In addition, China’s strong involvement in Zambia’s economy has recently been highlighted by reports of anti-Chinese sentiment among citizens.

In order to assess food security, security, and perceptions of foreign influence in Zambia at a high level, GeoPoll recently conducted a survey with 404 Zambians via SMS. Respondents are 51% male and 49% female and represent all ten provinces in Zambia. The age breakdown of respondents is 34% 18-24, 42% 25-34, and 24% ages 35 and older. The full results of the survey can be seen in the dashboard at the bottom of the page, and key highlights are below.

The first topic area we examined was food security and lack of resources in Zambia. We found that 47% indicated there had been no food to eat in their house due to a lack of resources at some point in the past 4 weeks, and 40% stated that they or a household member had gone to bed hungry due to a lack of food, with 67% of those respondents saying this had occurred 1-2 times in the past 4 weeks. A lower percentage, 25% said that they or a household member had gone a whole day and night without eating anything, with again the majority of respondents (69%) stating that this had happened 1-2 times. For all three questions around food security, females were more likely to state a lack of food or resources to get food than males.

These findings demonstrate that close to half of our sample has struggled with having enough food to eat at some point in the past 4 weeks, with a quarter reporting a more severe struggle with food insecurity and hunger.

China has had a huge impact on Zambia ever since Zambia’s independence in 1964: China is one of the country’s oldest partners, and Zambia’s infrastructure has been hugely influenced by the Chinese firms who often win government projects for roads, airports, and more. GeoPoll’s study finds that Zambians are acutely aware of China’s influence on their country, with 70% stating that China has the largest influence on their country’s economy, over the USA, at 13%, and Zambia’s African neighbors. Politically, China and the US are perceived as having more equal influences over Zambia, though China is still mentioned by the largest percentage of respondents, 31%, compared to 28% who stated the USA has the largest influence over Zambia’s politics. Other political influencers are South Africa, at 10%, and DRC, at 7%.

Despite Zambia’s constitution guaranteeing freedom of expression, in reality, Zambia’s press has been regularly threatened, and as of 2017 Freedom House still classified their press as “not free,” with most of the largest newspapers and TV outlets being owned by or at least partially controlled by the government. GeoPoll’s survey included several questions on media consumption, finding that TV is the most consumed daily media, with 58% stating that they watch TV daily, compared to 53% and 20% who listen to the radio and read physical newspapers or magazines respectively. Facebook was found to be the most popular platform for reading local news, with 66% of responses, compared to WhatsApp, which is also owned by Facebook, at 10%, and Youtube at 6%.

GeoPoll conducts surveys via SMS, voice calls, and other modes throughout Zambia on a variety of topics, from agriculture and food security to media consumption and brand awareness. To conduct your own survey with GeoPoll’s database of respondents in Zambia, please contact us today.