Kantar-GeoPoll Media Measurement (KGMM) collects overnight data on audience size, ratings, and share for TV and radio, 365 days a year. KGMM uses a 4-hour recall mobile survey methodology to produce the most accurate diary data available in many African countries.  This report includes KGMM data for the top TV stations in Uganda over a 3-month period, from July 1 – September 30, 2015.  You can view more KGMM audience measurement data and filter it by location and demographics by registering for an account here. 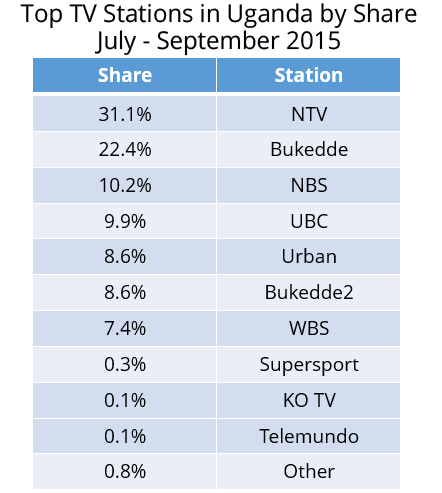 KGMM is available on a subscription basis in Uganda and a free version of KGMM is currently available exclusively to Ugandan broadcasters. Click below to register for an account using referral code “UGANDA” and a GeoPoll representative will contact you shortly to activate your account.

*Rating is the proportion watching a station out of the total sample at that time, multiplied by 100. If 50 people out of 500 surveyed watched Station X, the rating for Station X would be (50/500)*100) = 10. In Uganda, KGMM includes a sample of over 500 respondents for every time period.