Using the daily data collected through Kantar-GeoPoll Media Measurement, GeoPoll has analyzed the top TV stations in Ghana and top TV stations in Nigeria for Q4 2015. We examined both TV ratings* and share** for the top stations in Kenya and Tanzania. To view more detailed data, filter results by demographics, and plan ad spend based on KGMM’s audience measurement data in Africa please contact us.

In Nigeria GeoPoll measures TV consumption in 8 states: Abia, Edo, Enugu, Federal Capital Territory, Kaduna, Lagos, Oyo, and Rivers. The below chart shows the average ratings for the top 10 channels in these states during the day from 6:00 to 22:00. 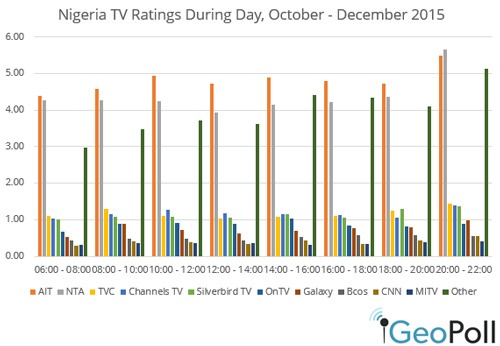 Nigeria boasts numerous TV stations that are organized by state and ultimately the high rating for “other” in the above chart points to fragmented viewership across the country. AIT and NTA have high ratings throughout the day, and AIT has higher ratings than NTA during most time blocks except 20:00 – 22:00 when NTA takes over. Channels TV and TVC compete for the 3rd throughout most of the day but Silverbird TV takes the 3rd position during prime time, between 18:00 – 20:00.

GeoPoll also examined average audience share over the entire period from October 1st – December 31st. We find that AIT Lagos and NTA closely compete for share, at an average of 25.6% and 23.4% respectively. Full results are below: 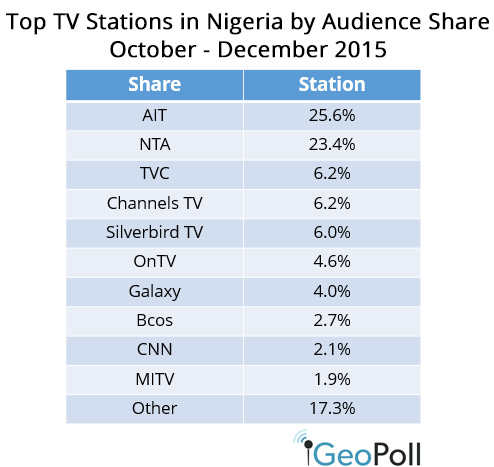 Kantar-GeoPoll Media Measurement covers the entire country of Ghana, and measures ratings, audience size, and audience share of TV, radio, and print outlets. The below chart shows the average ratings in Q4 2015 for the top TV stations during the peak hours. 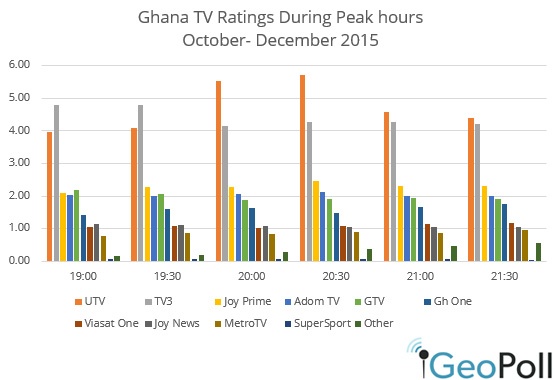 GeoPoll also examined average share from October to December 2015. GeoPoll found that UTV had the highest share in Q4, capturing on average 21.7% of the audience. TV3 and Joy Prime rank second and third with 20.5% and 11.3% respectively.  Below are the full rankings: 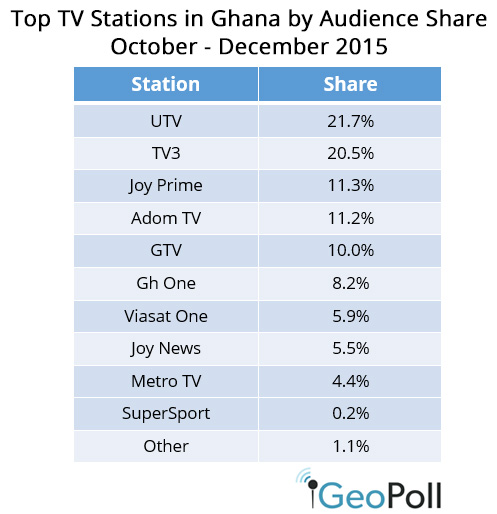 To use KGMM data to analyze station performance, target audiences, and plan ad spend, contact us about subscribing to our daily data set.  KGMM overnight ratings data is available 24/7 via an interactive dashboard that includes media planning and post-campaign evaluation tools.