Using the daily data collected through GeoPoll’s Media Measurement Service, GeoPoll has analyzed the top radio stations in Nigeria and Ghana for the past three months, from February 1st- April 30th. We examined both ratings* and share** for the top stations in each country.

Nigeria
The below chart shows the average ratings for the top 10 radio stations during the day, from 6:00 to 22:00. 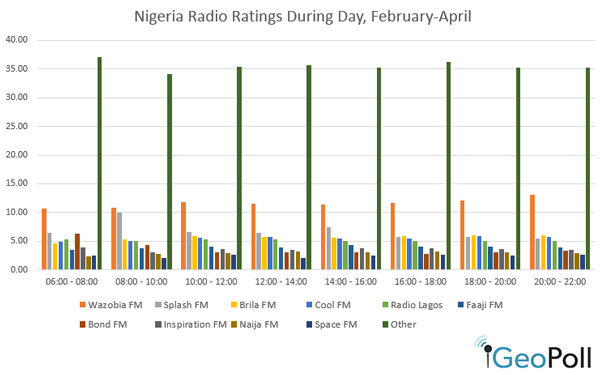 Nigeria boasts numerous radio stations that are organized by state and ultimately the high rating for “other” in the above chart points to fragmented listenership across the country. During the morning hours, Splash FM gets higher ratings between 08:00-10:00. Bond FM listeners also appear to be tuned more in the morning period. Wazobia, on the other hands gets higher ratings during the evening hours.

GeoPoll also examined average share over the entire period from February 1st – April 30th. GeoPoll found that Ray Power and Wazobia FM together get ¼ of the share. Brilla FM, Cool FM and Radio Lagos closely compete for share, all getting between 5.45% and 6.81% of the total audience listening to radio at that time. Full results are below: 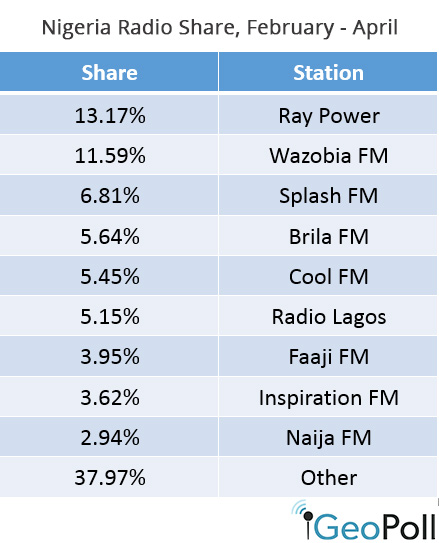 Ghana
The below chart shows the average ratings for the top 10 radio stations during the day, from 6:00 to 22:00.  As a background, it is important to note the presence of a lot of stations in Ghana which are mostly regionalized. The net effect of this is that the listenership is fragmented and “Other” radio stations takes up high ratings meaning that ratings are less than 2 points for most stations. 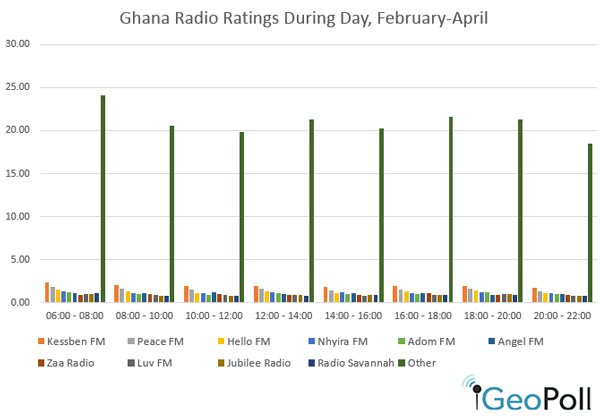 GeoPoll also examined average share over the entire period from February 1st – April 30th. GeoPoll found that the share is evenly distributed since most listeners are listening to a number of stations. Despite this phenomenon, Kessben FM and Peace FM get the highest share. We note an almost similar share between Nhyira, Adom and Angel FM. Full results are below: 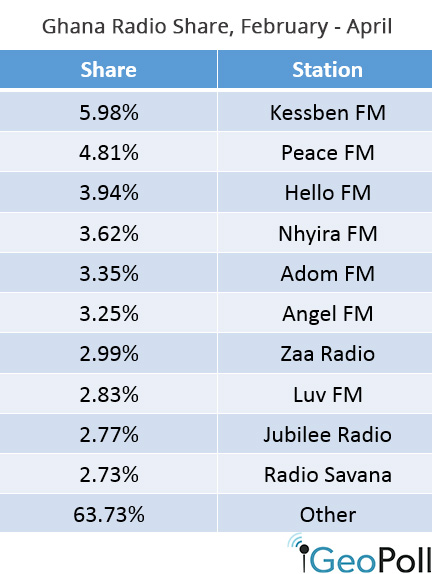